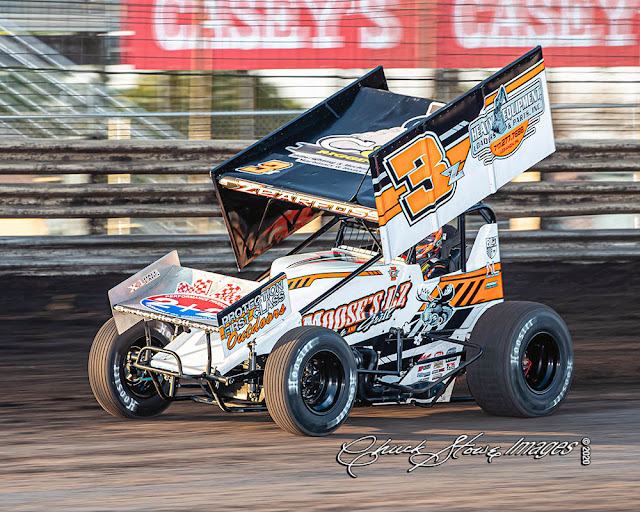 JONESTOWN, Pa. (August 10, 2020) – The ‘Jonestown Jet’ Brock Zearfoss has been a man on a mission in the great state of Iowa. Not only has the former Port Royal Speedway champion been competitive among the nation’s top 360 sprint car competitors, but the Jonestown, Pennsylvania-native has yet to finish a main event outside of the top-ten.

Lining up ninth, Zearfoss forged ahead, wrapping up the 25-lap showcase fourth in the running order, simultaneously earning the 360 Knoxville Nationals Rookie of the Year honor.

To no surprise, the speed did not stop in Knoxville, as Zearfoss joined the ASCS National Tour for Ultimate Challenge action at Southern Iowa Speedway on Sunday evening, August 9, and concluded the $4,000-to-win, 360 sprint car blockbuster third in the running order.

“It’s been a great trip. The plan is to transfer all of our 360 momentum into the 410. With the way our team has been molding and adapting, it should be an easy transition. I think we are all excited to get started,” Brock Zearfoss said, driver of the Brock Zearfoss Racing, Moose’s LZ Bar & Grill, Heavy Equipment, Loaders & Parts Inc., C&D Rigging Inc., BAPS Auto Paints & Supply, Meckley’s Limestone Products, Berkebile Oil Company, Klick Lewis Cars, J.P. Adamsky Trucking, X-1 Race Cars, No. 3Z sprint car. “I really can’t say enough about this team right now. Tye and Shane bust their butts and I wouldn’t be where I am without them. It’s not an easy road out here, so to be able to put together speed right away says something.”

Brock Zearfoss and Brock Zearfoss Racing will continue their Iowa trip with a return visit to the Southern Iowa Speedway in Oskaloosa on Monday evening, August 10. Zearfoss will follow his Front Row Challenge start with the three-day One And Only at Knoxville Raceway featuring the World of Outlaws Sprint Car Series on August 13-15. The former Knoxville Nationals A-Main starter will chase the $50,000 top prize to be awarded on Saturday night.

Fans can keep up with Brock Zearfoss during his entire campaign right here at www.fullyinjected.com, or at www.brockzearfoss.com. Be sure to “follow” the “Jonestown Jet” on all of the available social media networks including Twitter: https://twitter.com/brock_zearfoss and Facebook: https://www.facebook.com/brockzearfossracing.