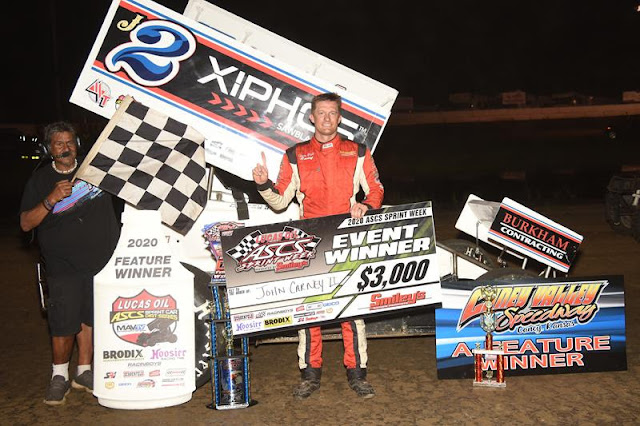 Inside Line Promotions - NASHVILLE, Ark. (Aug. 17, 2020) - The ASCS Sprint Week presented by Smiley's Racing Products was a success for John Carney II, who won a race and finished fifth in the championship standings out of the 90-plus drivers who raced during the six-day, six-race spectacle.
The SawBlade.com Xiphos saw blade and Danny Sander Construction sponsored driver kicked off the competition last Tuesday at Lakeside Speedway in Kansas City, Kan., where he charged from 19th to 12th in the A Main. It was the second-most positions gained in the feature.
Carney II used that momentum to capture his first ASCS triumph of the season on Wednesday at Caney Valley Speedway in Caney, Kan. He won a heat race, a dash and the main event.
"The track started off so dry," he said. "I knew being at the front of the field was critical. Winning the heat was good and winning the dash was the ultimate. I knew I needed to get into turn one leading it and then I could control the tempo of the race in the feature. We did that and then it was about staying out of trouble with lapped cars and keeping my tires under myself.
"There were over 90 teams that competed in the ASCS Sprint Week. To outrun everyone on one night was good. It helps with the confidence for the whole team. Everyone who supports the team wants to see us win so it was great."
Carney II maneuvered from 17th to seventh the ensuing night at 81 Speedway in Park City, Kan., where he garnered the Hard Charger Award for passing the most cars.
A 14th-place outing on Friday at Creek County Speedway in Sapulpa, Okla., and a charge from 20th to 13th on Saturday at I-30 Speedway in Little Rock, Ark., set the stage for Sunday's event finale at Diamond Park Speedway.
"On the third attempt to start the race I got hit by someone and they ran me up the wall," he said. "I was back to 11th and we had to climb our way back up with no cautions and no passing. We finished sixth.
"A similar thing happened in a heat race at 81 Speedway. We had an awesome car and if we could have been in a dash I think we could have won, but someone drove through us in the heat race. It was good to come out with a top 10, but those are the nights that get in your mind where you think you could have won."
Carney II was satisfied with surviving the grueling week with his car in one piece and several stout performances.
"We had a pretty good game plan," he said. "After each race we washed up, serviced the car and then drove to the track the next day. We stuck to a schedule so to speak every day. It made the most sense. It was in the 90s all week, but the heat index was over 100 every day. We didn't want to combat the heat six days in a row."
Carney II plans on racing this Thursday through Saturday at Dodge City Raceway Park in Dodge City, Kan., during the Lubbock Wrecker Service DCRP Sprint Car Nationals.
QUICK RESULTS -
Aug. 11 - Lakeside Speedway in Kansas City, Kan. - Qualifying: 20; Heat race: 5 (6); B Main: 3 (3); Feature: 12 (19).
Aug. 12 - Caney Valley Speedway in Caney, Kan. - Qualifying: 6; Heat race: 1 (3); Dash: 1 (1); Feature: 1 (2).
Aug. 13 - 81 Speedway in Park City, Kan. - Qualifying: 6; Heat race: 5 (6); B Main: 1 (2); Feature: 7 (17).
Aug. 14 - Creek County Speedway in Sapulpa, Okla. - Qualifying: 18; Heat race: 1 (2); Dash: 5 (5); Feature: 14 (9).
Aug. 15 - I-30 Speedway in Little Rock, Ark. - Qualifying: 1; Heat race: 7 (4); B Main: 2 (1); Feature: 13 (20).
Aug. 16 - Diamond Park Speedway in Nashville, Ark. - Qualifying: 2; Heat race: 3 (4); Dash: 4 (7); Feature: 6 (4).
SEASON STATS -
27 races, 5 wins, 8 top fives, 13 top 10s, 20 top 15s, 23 top 20s
UP NEXT -
Thursday through Saturday at Dodge City Raceway Park in Dodge City, Kan., for the Lubbock Wrecker Service DCRP Sprint Car Nationals
MEDIA LINKS -
Website: https://j2carney.com/
Twitter: https://twitter.com/J2Carney
Facebook: https://www.facebook.com/JohnCarneyRacing/
SPONSOR SPOTLIGHT - Danny Sander Construction
Danny Sander Construction specializes in underground utility work. The company, which is based in El Paso, Texas, has been a locally owned and family run business for more than 40 years. For more information, visit http://www.DannySander.com.
"I've been friends with the Sander Family for 25 years," Carney II said. "We raced against each other and have been great friends for a long time. When I started the team three years ago he was one of the first people who wanted to help. It's been a lot of fun."
Carney would also like to thank SawBlade.com, Mesilla Valley Transportation, Burkham Contracting, South Plains Towing, CSR Garage, Jackson Compaction, Speedway Motors Racing Engines, Momentum Racing Suspensions, Raider Graphix and Tejas Motors for their continued support.
INSIDE LINE PROMOTIONS -
Inside Line Promotions specializes in affordable public relations and media management for motor sports drivers, teams, sponsors, tracks, series, events, organizations and manufacturers. ILP Founder Shawn Miller leverages professional journalism with new media technologies and social networking to improve your exposure and the return on investment for your sponsors.
To meet the media relations needs of your program by joining Team ILP, contact Shawn at 541-510-3663 or Shawn@InsideLinePromotions.com . For more information on Inside Line Promotions, visit http://www.InsideLinePromotions.com.
*PHOTO BY PAUL ARCH*
Posted by Bill McIntyre at Tuesday, August 18, 2020