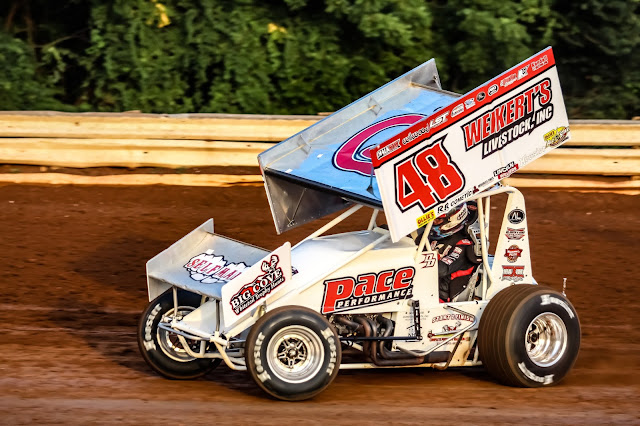 7/31/20
Mechanicsburg – Danny Dietrich took the lead from Anthony Macri on a lap 18 restart and went on to win his first Williams Grove Speedway 410 sprint main of the season on Friday night at the Cumberland County oval.
The victory was the 25th of Dietrich’s career at the speedway.
In the 25-lap 358 sprint main, Carlisle’s Derek Locke sped to victory.
The win was the third generation driver’s first ever win at the facility.
Tyler Ross could lead only one lap of the 25-lap 410 sprint feature before second starter Anthony Macri got by for control.
Macri hit lapped traffic on the eighth loop with Ross and third starter Danny Dietrich in tow.
The pair dueled for second briefly before Brent Marks and Brock Zearfoss joined in the battle and as all four pilots raced for second under a blanket, Macri began getting away from the field.
By lap 16, Macri had a straightaway lead over the four-car battle for second as Dietrich went for a pass in turns three and four with Ross holding the spot.
That move by Dietrich only served to intensify the war for second as the foursome really bunched up for the spot as they raced into turn three on the 18th tour.
With Zearfoss in the middle and Marks blasting the bottom, Ross ran the top groove only to see both cars get underneath and edge him too high in the fourth corner, forcing him to come to a stop.
Dietrich then took over second with Marks, Zearfoss and now Freddie Rahmer inside the top five.
Macri had been rolling the cushion to perfection prior to the yellow, making his time while pulling away from the field.
But when action resumed, he dropped off of the cushion line entering the first turn and instead rolled in through the middle before sliding up to catch the cushion.
This gave Dietrich exactly the run that he needed for the win as he worked off of the bottom down the backchute to blast by on the lowside in turns three and four for control.
Macri seemed to struggle after the restart, soon giving up second to Marks with five laps left.
By that time however, Dietrich was off and running to the win, which he go by a margin of 2.616 seconds.
Macri settled for third followed by Zearfoss and Lucas Wolfe.
Sixth through 10th went to Ryan Smith, Freddie Rahmer, Jason Solwold, Chase Dietz and Matt Campbell.
Twin heats went to Ross and Macri.
“On the restart we went into one and I thought maybe he might slide himself so I just had to nail the bottom,” Dietrich said of his strategy against Macri on the final restart.
“We’ve been racing against some really, really good competition, whether it’s the All Stars or the outlaws or just plain Kyle Larson.”
The 25-lap 358 sprint main, a Summer Series extra distance event, got off to a rocky start with four attempts at getting the first lap complete before Derek Locke could be scored as the official leader.
Locke would end up leading all 25 laps but not before feeling pressure late in the race as applied by Brett Wanner.
A red for refueling with three laps to go saw Wanner get under and beside Locke for control on the restart and ensuing laps but a wiggle on the second turn cushion with one and one-half laps to go sealed the deal for Locke.
Wanner had also gotten by Locke for the lead on lap 11 only to see Locke come back on him for control in the third turn.
Polesitter Kevin Nouse was sidelined from the event during the second attempted start when Doug Hammaker blasted underneath him for second in the third turn and made contact with his left front wheel, sending him careening upward across the speedway.
Hammaker would later withdraw from the event mid-race.
Dylan Norrish rode home third followed by Jordan Strickler and Scott Fisher.
Sixth through 10th went to Jordan Givler, Brett Strickler, Rich Eichelberger, Chad Criswell and Matt Findley.
Heats went to Locke, Hammaker and Nouse with Findley taking the consolation race.
Feature Finishes, 7/31/20:
410 sprints, 25 laps: 1. Danny Dietrich, 2. Brent Marks, 3. Anthony Macri, 4. Brock Zearfoss, 5. Lucas Wolfe, 6. Ryan Smith, 7. Freddie Rahmer, 8. Jason Solwold, 9. Chase Dietz, 10. Matt Campbell, 11. Adrian Shaffer, 12. TJ Stutts, 13. Brett Michalski, 14. Nicole Bower, 15. Troy Fraker, 16. Tyler Ross, 17. Chad Trout, 18. Cody Fletcher, 19. Steve Surniak
DNQ: Steve Wilbur
358 sprints, 25 laps: 1. Derek Locke, 2. Brett Wanner, 3. Dylan Norris, 4. Jordan Strickler, 5. Scott Fisher, 6. Jordan Givler, 7. Brett Strickler, 8. Rich Eichelberger, 9. Chad Criswell, 10. Matt Findley, 11. Justin Foster, 12. Russell Hammaker, 13. Nat Tuckey, 14. Mark VanVorst, 15. Billy Heltzel, 16. Hannah Riser, 17. Zach Newlin, 18. Kyle Denmyer, 19. Chris Frank, 20. Wyatt H inkle, 21. Doug Hammaker, 22. Travis Scott, 23. Tyler Templin, 24. Kevin Nouse
DNQ: Brett Rose, Ashley Capetta,
Posted by Bill McIntyre at Saturday, August 01, 2020