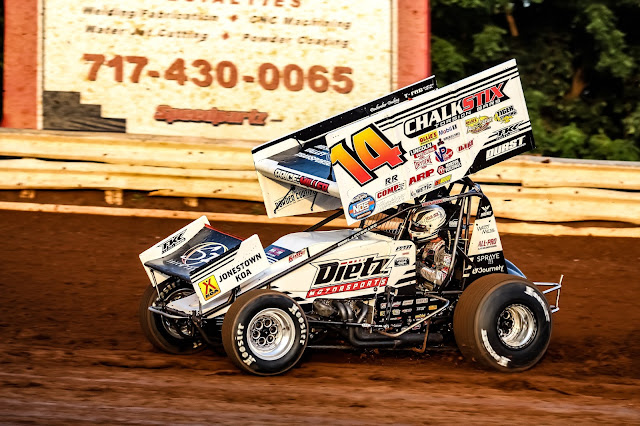 DODGE CITY RACEWAY PARK, KS — Aug. 27, 2020 — The World of Outlaws NOS Energy Drink Sprint Car Series will bring the best Sprint Car drivers in the world back to Dodge City Raceway Park for the Boot Hill Showdown on Sept. 11-12.
Limited general admission tickets are available for the doubleheader event that marks the Series’ first stop in Kansas this season. You can get your tickets by clicking here.
Fans were shown why the World of Outlaws is The Greatest Show on Dirt at the Boot Hill Showdown last year with 10-time Series champion Donny Schatz and now reigning champion Brad Sweet swapping wins and tightening their points battle.
The 3/8-mile track is set to host another two epic nights of racing and play a key role in two championship battles this year. Five drivers are still in contention for the driver championship and six teams are in contention for the team championship. Sweet and Schatz will be back to defend their wins but will have to face the likes of points leader Logan Schuchart, 2019 Knoxville Nationals champion David Gravel, 2013 Series champion Daryn Pittman and many more.
The 900hp chariots of the World of Outlaws have produced a plethora of jaw dropping moments and exciting finishes this season and will be poised to do so again at Dodge City Raceway Park.
If you can’t make it to the track, you can watch all of the action live on DIRTVision.
PREVIOUS WINNERS AT DODGE CITY RACEWAY PARK
2019 – Donny Schatz on Sept. 20, Brad Sweet on Sept. 21
2018 – Donny Schatz on Oct. 20
2015 – Jason Sides on July 3, Donny Schatz on July 4
2014 – Daryn Pittman on July 4, Daryn Pittman on July 5
2013 – Donny Schatz on July 5, Daryn Pittman on July 6
2012 – Steve Kinser on June 22, Kraig Kinser on June 23
2011 – Craig Dollansky on July 1, Jason Sides on July 2
2010 – Sammy Swindell on June 11, Joey Saldana on June 13
2009 – Joey Saldana on June 12, Joey Saldana on June 13
2008 – Joey Saldana on June 20, Donny Schatz on June 21
2007 – Jason Meyers on June 22, Daryn Pittman on June 23
2006 – Joey Saldana on July 1
2005 – Danny Lasoski on Oct. 7, Danny Lasoski on Oct. 8
Posted by Bill McIntyre at Friday, August 28, 2020