Dover Recovering From Vicious Crash During Frustrating Weekend in Iowa 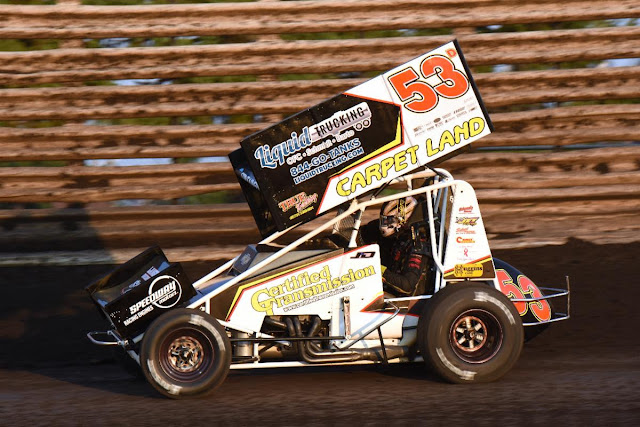 Inside Line Promotions - OSKALOOSA, Iowa (Aug. 11, 2020) - Jack Dover is recuperating after a wild crash on Sunday night sent him to the hospital.

Dover got upside down on the opening lap of his Lucas Oil ASCS National Tour heat race during the Sage Fruit Ultimate Challenge presented by Searsboro Telephone Co. at Southern Iowa Speedway.

"We were fourth quickest in hot laps and I felt really good," he said. "On the first start we went down into turns one and two and we were up to third. I knew we had a good car, but they called the start back. We got a great start again on the second attempt. We went into turn one and ran in through the middle. Someone went low and slid up. I was going to cut underneath him, but he slowed up too much and I caught his right rear. I thought we'd come out of it. Then I was flipping and once I thought it was about over it kept going."

Dover flipped multiple times, destroying his race car and ending his night early. He visited a hospital, but was released that night.

It was a rough ending to a challenging weekend for Dover, who had a lot of speed at the 30th annual My Place Hotels 360 Knoxville Nationals presented by Great Southern Bank hosted by Knoxville Raceway in Knoxville, Iowa.

"I had a lot of confidence going into the weekend," he said. "We drew dead last in our prelim night, but we knew we had something to qualify 19 th and run second in our heat race."

Dover went out last in qualifying, but timed in 19th quickest out of the nearly 50 competitors. He then gained a spot in a heat race to finish second. Dover lined up 11th for the A Main and quickly made his way toward the top five. He was up to seventh only a few laps in when a mechanical problem sent him to the pits with a DNF.

"I'm really confident we had a top-five car that night," he said. "I calculated the points and if we would have finished sixth in our prelim feature we would have started 19th in the A Main on Saturday."

Instead Dover lined up 19th in the B Main. He advanced seven positions to finish 12th.

Dover will take this weekend off before racing on Aug. 21 at Rapid Speedway in Rock Rapids, Iowa, and Aug. 22 at Park Jefferson International Speedway in Jefferson, S.D., with the Midwest Power Series and Midwest Sprint Touring Series.