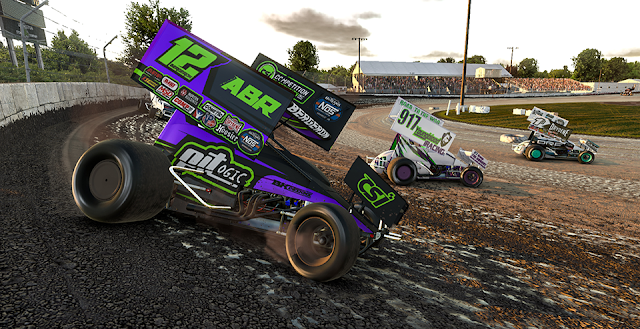 FAIRBURY, IL – Aug. 26, 2020 – 305s, 360s or 410s. It just doesn’t matter what class he races; Alex Bergeron shows up to every Sprint Car race he enters and shows exactly why he is the two-time and defending iRacing World of Outlaws NOS Energy Drink Sprint Car Series World Champion.
He was the first to become a two-time victor with the DIRTcar eSports league back in June, and now Bergeron’s done it yet again with a big win in Wednesday night’s VP Racing Fuels 305 Sprint Car Showdown at Fairbury Speedway.
Taking the lead from Tyler Jackson in the final laps after a race-long battle with he and Kendal Tucker, Bergeron showed the DIRTVision presented by Drydene audience just how exciting and competitive the DIRTcar eSports league is every week.
“Qualified first, won the Heat Race and won the Feature, so I can’t ask for more,” Bergeron told announcer Chase Raudman in the DIRTVision post-race interview.
Bergeron may have won the war, but he initially did not win the battle of the opening stages, despite leading the first lap.
Jumping to the early race lead was DIRTcar Street Stock guru Tyler Jackson, who had a very impressive run inside the podium throughout the race, mixing it up with the iRacing Pro-license drivers while trying to become the very first non-Pro driver to win a DIRTcar eSports event.
Through the first three quarters of the race, it looked as though Jackson was going to break through and accomplish the feat, leading laps 2-27 of the 30-lap contest.
Bergeron was running third with four laps to go after chasing fellow iRacing Pro Kendal Tucker and leader Jackson for most of the race in traffic. With the race going caution-free, lapped traffic played a big role in the outcome, as a slower car was thrown right in the middle of the leaders’ race with just three circuits remaining.
Going down the backstretch with just five laps remaining, Jackson had committed to the low side of a lapped car heading into Turn 3 while Tucker went to his outside. The slower car bobbled and made contact with Tucker, sending both into the outside wall and opening the door for Bergeron to slip right through the middle for second.
“The lap car was there, Tucker went to the outside, I took the middle and just sent it in there. [Tucker] got shoved out, so I took the spot. I ran the top and just tried to be as fast as possible and get around Tyler [Jackson], and that’s what I did,” Bergeron said of the pass for second.
With Tucker behind him, Bergeron made a beeline for Jackson’s spot out front. Using that high side momentum, the Team ABR-pilot took advantage of another slower car right in Jackson’s middle groove just two laps later and took the lead away as they crossed the line with two-to-go.
Jackson and Tucker came together on the white-flag lap, allowing Tucker to scoot by for second and moving Jackson back to third. Back out front, it was all Bergeron, who crossed the line first on Lap 30 to pick up the $300 victory and the $25 bonus from VP Racing Fuels.
After the checkered, Bergeron commended Jackson and his skills, running out front with he and Tucker as a non-iRacing Pro.
“He was pretty good. I didn’t know who he was, but he was pretty good, for sure. I’m glad that he was able to get up here; it was a fun race,” Bergeron said of Jackson.
Back in second, behind Bergeron for what is now the third time in his DIRTcar eSports career, and fifth runner-up finish overall, Tucker felt the bad luck falling on him again Wednesday night.
“Honestly, just another Kendal Tucker-type of run,” Tucker said after the race. “Always up front, and something just always happens. I was able to catch back up to Tyler [Jackson] right there with about four-to-go, and I was going to make a move on him… I guess the dude who was apologizing was the lapper who slid all the way up the front stretch and pretty much ended all hope for me in winning that race.”
As for the Street Stock prodigy and his impressive run up front, Jackson was just thrilled to even be up front with such great competition, especially in a car class he very rarely is seen in.
“I’m pretty excited to run that well, but it sucks leading all those laps and losing,” Jackson said. “But, [Bergeron and Tucker] are pros for a reason. I don’t really even drive the Sprint Cars much, I just drive Street Stocks and Late Models.”
UP NEXT
The DIRTcar eSports league action continues in just two weeks’ time – DIRTcar Pro Late Models tackle the Limaland Motorsports Park on Sept. 9. Fixed setups, $20 registration fee with $300 going to the winner. $200 for second, $100 for third and contingencies for all qualifying events available.
Catch all the action LIVE on DIRTVision presented by Drydene!
FEATURE FINISH:
1. 12-Alex Bergeron (1) [$300]; 2. 10-Kendal Tucker (3) [$200]; 3. 8-Tyler Jackson (2) [$100]; 4. 17-Bruce Jones (6) [$75]; 5. 46-Jonathan Nause (5) [$50]; 6. 99-Jayton Parrish (11) [$45]; 7. 069-Brian Smith (7) [$40]; 8. 11-Sterling Beard (13) [$35]; 9. 55-Joe Grabianowski (8) [$30]; 10. 917-Phillip Young (10) [$25]; 11. 126-Jeffrey Eddy (9) [$20]; 12. 113-Danny Chandler (12) [$20]; 13. 7-Brent Shearer (4) [$20]; 14. 13-Matthew Windhausen (14) [$20]
Posted by Bill McIntyre at Thursday, August 27, 2020