Goetz is Great at Skagit Speedway 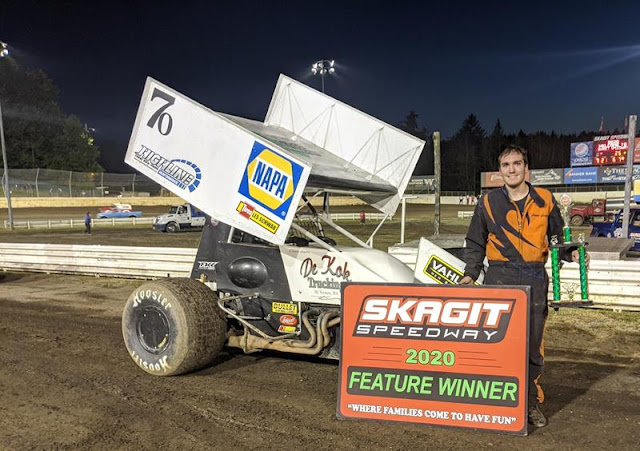 John Tharp set out to the early lead in the A Feature with Goetz behind him by two car lengths. Goetz was content to run the top and bide his time early, until taking a shot at Tharp on the low side on turn one at the start of lap six. Finding good forward bite, Goetz pulled even with Tharp on the back stretch and passed him through the third and fourth turns in what ended up being the race winning move. From there forward, Goetz was untouchable as he went the rest of the distance to take the win without challenge. Tharp and Jesse Schlotfeldt engaged in an entertaining battle for second place within slower traffic before contact with a slower car caught Tharp coming to the checkered flag, allowing Schlotfeldt to take second with Kelsey Carpenter moving into third.

For the fifth time with the series on the year and third time at Skagit Speedway, Jared Peterson took the victory in the NW Focus Midgets. Nik Larson held the lead for the first 11 laps before drifting too high through turn two and jumping the cushion, allowing Peterson past for the top spot. Peterson would keep Larson at bay until a lap 22 restart bunched the field back up. On that restart, Jared nailed his marks and drove away for the comfortable win, while Larson slipped a few spots on the restart, allowing Shane Smith to move into second and Nick Evans into third for the finish.

After watching his parents compete at Skagit Speedway for many years, Colin Sims became the first in the family to grace victory lane by scoring the win in the Outlaw Tuners. After taking the lead on lap two, Sims outraced Rick Young and Howard Vos for the triumph.