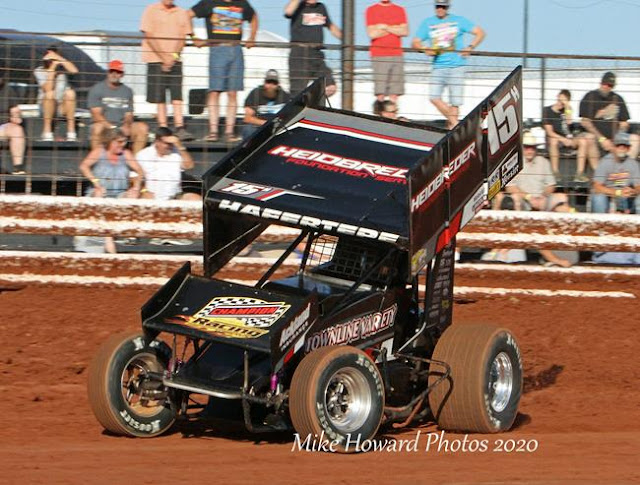 (Image Credit: Mike Howard)
Bryan Hulbert – KNOXVILLE, Iowa (August 4, 2020) Taking on the Ollie's Bargain Outlet All Star Circuit of Champions presented by Mobil 1 three times this past weekend in Wisconsin and Iowa, Sam Hafertepe, Jr. had a weekend best run of 12th.
Starting Friday, July 30 at Plymouth Dirt Track in Plymouth, Wis., the Hills Racing No. 15h crossed the line 12th. Getting as high as seventh, the track started going away and resulted in Sam slipping back in the closing laps.
"We maintained in the Heat Race and made the Dash. We adjusted the car and got it too tight, and I biked up and ended up in the back. Once we got to the A-Feature, we backtracked on the setup a little bit between what we had in the Dash, and where we were in the Heat and early on, we were really good. Right away we jumped up to about seventh, but the later the race got, the car started to go away on me, and I faded back, but it was a decent night, and a good run getting back into the 410," explained Hafertepe.
Facing a narrow racing surface early on at 34 Raceway in Burlington, Iowa the following night, things started rough for Sam as the engine was off in qualifying. Resulting in a time good enough for 21st overall, Hafertepe managed to make into the A-Feature through his Heat Race, and from there was able to work from 17th to 12th.
"The engine was missing in Qualifying, so that put us behind the eight-ball," stated Sam. "We were 21st out of 27, but luckily starting seventh in the Heat put me one spot out of the transfer. Almost got to fifth, but the track was tough to move around on. In the Feature, we got to 13th right off the bat, and the track had widened out a little bit, but it was still hard to move around, but we were able to get one more at the end, and that was enough to get Hard Charger."
Going into Knoxville Raceway on Saturday, the night started well and saw Sam able to transfer straight into the A-Feature, however, the night would end early as Sam pulled off suspecting engine issues.
"We started 17th and got up to like 12th, and with about three to go, I thought I hurt the engine, and it actually kind of sputtered out on me. Being the engine we are planning to use at Knoxville in a couple of weeks, I took the precaution and just pulled in, but we're pleased with where we are going. It seems like we make some good gains night after night, and just get a hiccup. Once we get going, I think we'll be right where we need to be."
Looking to this weekend, Sam will return to Knoxville Raceway for the 30th annual My Place Hotels ASCS 360 Knoxville Nationals presented by Great Southern Bank. Qualifying on Thursday, August 6, Sam feels confident in his ASCS program going into the $15,000 to win weekend.
"For our 360 program, we tested a few weeks ago, and I felt like our car was on point. As a driver, I made some mistakes. We were also going in with an engine that was on its 20th night, so we were down on power, but we've got a fresh engine for this weekend and this year, we've had more time going to Knoxville before the Nationals than we've ever had with the way this season's worked so I'm excited to see how we can do. I feel comfortable in the car, and if there was going to be a year to win it, this could be it."
For those unable to attend Knoxville Raceway, the event will be shown live on http://www.dirtvision.com.
Sam will also be in action Sunday, August 9, at the Sage Fruit Ultimate Challenge at Southern Iowa Speedway. The event will be shown live on Racinboys.com for the first time.
For continued updates on Sam Hafertepe, Jr. log onto http://www.sam15.com and make sure to find him on Twitter (@samhafertepejr). For news on Hill's Racing Team, log onto https://www.facebook.com/hillsracing/ and on Twitter (@HillsRacingTeam).
2020 Season to Date:
Events: 37; Wins -6; Top 5 – 10; Top 10 – 18; Top 20 – 24;
Coming Up:
August 6-8 – Knoxville Raceway (Knoxville, Iowa) w/ASCS National
August 9 – Southern Iowa Speedway (Oskaloosa, Iowa) w/ASCS National
Sam Hafertepe, Jr. Online:
Facebook: https://www.facebook.com/profile.php?id=100011628097506
Website: http://www.sam15.com
Twitter: https://twitter.com/samhafertepejr
The Sponsors:
Hill's Racing Team, Townline Variety, Heidbreder Foundation Service, Kiebler & Sons Lawn, and Landscaping, Fisher Racing Engines, Super Shox, J&J Chassis, Smiley's Racing Products, Hoosier Tire, Huggins Cams, Champion Oil, The Sparks Family, Lonestar Speedway, Keizer Wheels, XYZ Machining, Simpson Racing Products, CP-Carrillo, KSE Power Steering, FK Rod Ends, BMRS, Allstar Performance, Saldana Racing Products, Vortex Wings, DMI, Wilwood Brakes, Kinsler Fuel Injection, Hwy. 79 Collision.
Posted by Bill McIntyre at Thursday, August 06, 2020