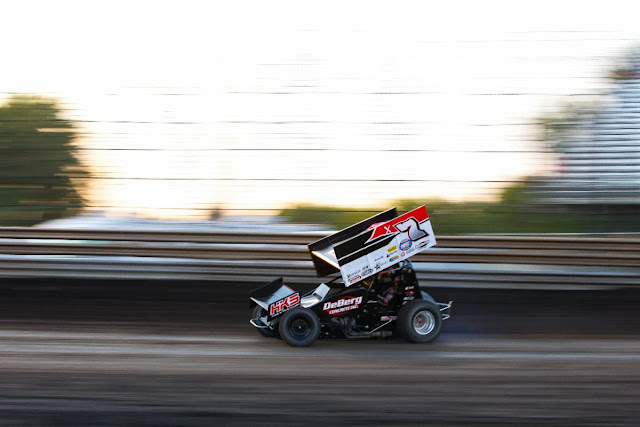 Inside Line Promotions - SPENCER, Iowa (Aug. 26, 2020) - Justin Henderson is scheduled to pilot the Mike Sandvig Racing No. 7 this Sunday during the World of Outlaws NOS Energy Drink Sprint Car Series show at I-80 Speedway in Greenwood, Neb.
This will be Henderson's first race behind the wheel of the Sandvig car since engine woes plagued the team during 'The One and Only' at Knoxville Raceway in Knoxville, Iowa, a couple of weeks ago, causing them to scratch for the entire weekend after one night of competition. With a refreshed engine in the car and redemption on his mind, Henderson is hoping for a successful night in Nebraska.
"We've got a new Rider in the car and we're ready to get back into things," he said. "The last time I was at I-80 I was in Mike's 360 car and we were really fast so I think we should be in good shape to roll right off the trailer fast."
Henderson is coming off a recent stretch of success in his own 360ci sprint car that saw him claim a weekend sweep with the Midwest Power Series at Rapid Speedway in Rock Rapids, Iowa, last Friday and at Park Jefferson International Speedway in North Sioux City, S.D., on Saturday. The victories were worth a combined $4,000, plus a $2,000 bonus supplied by his sponsor GRP Motorsports for winning both events.
Henderson noted that his personal team is streamlined to that of the Sandvig team, so he believes that his individual success will lead to bigger and better things as they begin a busy stretch that will likely involve more traveling than originally planned.
With their home track of Knoxville Raceway recently cancelling the remainder of the 2020 racing season due to COVID-19, Henderson and Sandvig have had to scramble to figure out where and when they will be racing.
"We've learned a lot with these race cars and Mike's car seems to be responding to the changes we're making in my car," he said. "We're going to jump around a little bit going forward, but I really don't know what's going to happen going forward. However, the races we have planned are pretty good ones so there's a lot to look forward to."
While it has thrown a wrench into their plans, Henderson believes seeing different places and facing tougher competition will allow them to continue to grow as a team in preparation for the 2021 season.
"We've talked about traveling a bit and I think we've got a car capable of contending anywhere in the country," he said. "You always want to be faster and you always want to move forward as a team so this will allow us to keep heading there. I'm very optimistic about the rest of the year and going forward."
SEASON STATS -
19 races, 1 win, 2 top fives, 6 top 10s, 12 top 15s, 14 top 20s
UP NEXT -
Sunday at I-80 Speedway in Greenwood, Neb., with the World of Outlaws NOS Energy Drink Sprint Car Series
MEDIA LINKS -
Twitter: https://twitter.com/Henderson_racin
Facebook: https://www.facebook.com/groups/90850346221/
SPONSOR SPOTLIGHT - Morton Buildings
Morton Buildings builds the finest, pole barns, equestrian buildings, steel buildings and more. For more information, visit http://www.MortonBuildings.com .
"We've had a relationship with Morton Buildings for more than four years and they've really grown in the racing scene," Sandvig said. "We're thrilled to have such a reputable sponsor as part of our team."
Sandvig would also like to thank Eszlinger Electric, Deberg Concrete, DeBerg Flooring, R2 Enterprise, GRP Motorsports, Winters Performance, Schoenfeld Headers, BK Racing TI Components, SBS FK Shocks, Wings Unlimited, Keizer Aluminum Wheels, Rider Racing Engines, Hinchman Racewear, Heartland Kitchen Solutions, Blud Lubricants, Triple X Race Co., Boji Custom Metal Works and Simpson Race Products for their continued support.
INSIDE LINE PROMOTIONS -
Inside Line Promotions specializes in affordable public relations and media management for motor sports drivers, teams, sponsors, tracks, series, events, organizations, and manufacturers. ILP Founder Shawn Miller leverages professional journalism with new media technologies and social networking to improve your exposure and the return on investment for your sponsors.
To meet the media relations needs of your program by joining Team ILP, contact Shawn at 541-510-3663 or Shawn@InsideLinePromotions.com . For more information on Inside Line Promotions, visit http://www.InsideLinePromotions.com.
*PHOTO BY TRENT GOWER PHOTOGRAPHY*
Posted by Bill McIntyre at Thursday, August 27, 2020