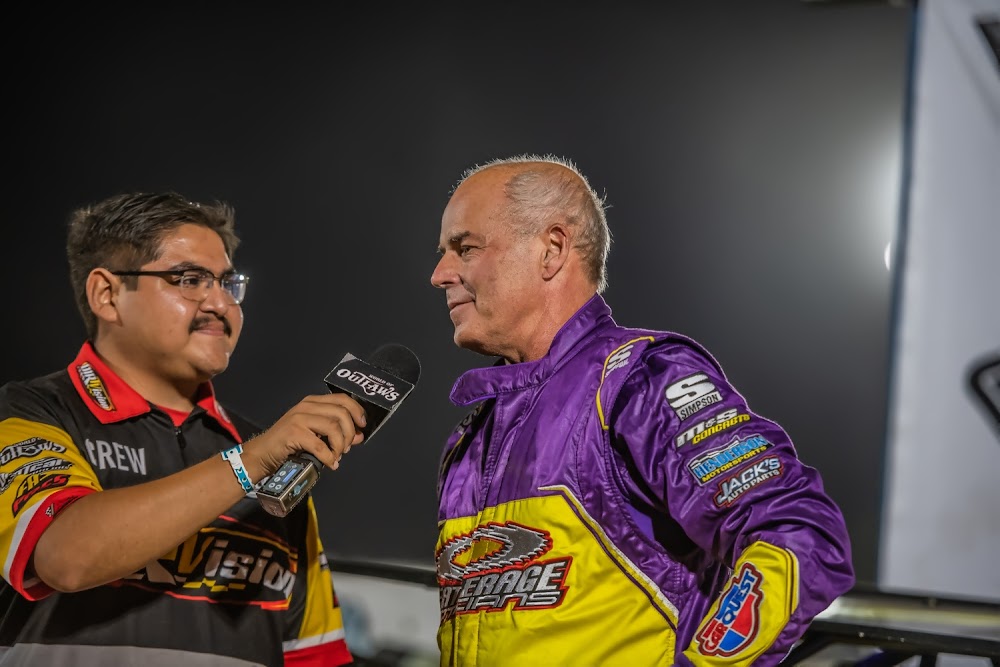 NEW RICHMOND, WISC. - A lot has changed since the inception of the USA Nationals in 1988. One thing that hasn't? Billy Moyer.

Affectionately known as "Mr. Smooth," Moyer is a five-time master of the USA Nationals with title bids coming from 1988-90 and again in 1991-92. He's without a doubt the most decorated driver in the history of the Cedar Lake Speedwaycrown jewel. He's led more than a whopping 400 feature laps, he's been on the podium an unmatched nine times, and he's got FIVE of the most coveted wooden eagles sitting in his shop.

On Friday night, as the celebration of the 33rd annual event rolled on, the 62-year old native of Batesville, Ark. looked as young as the day he first saw the New Richmond, Wisc. 3/8th-mile. Surviving a pair of Team Drydene heat races and then winning the Morton Buildings dash, Moyer officially secured the pole position of Saturday's $50,000-to-win, $3,000-to-start, 100-lap feature.

"I hope I can, I mean that's why we came here," Moyer joked when asked if he can win a sixth USA Nationals title. "100 laps is a really long time, but starting up front is definitely an advantage for us.

Scoring a 1st-to-1st win in his opening heat and backing that up with a 9th-to-4th bid in the second round, Moyer locked-in for Friday's Pole Dash as one of the top eight drivers in combined passing points. At the end of an intense set of ten heat races which saw plenty of drama, chaos and excitement, it was Tyler Erb and Jimmy Owens sitting atop the charts with 216 points apiece. The points were thrown out, however, and the redraw was set to shuffle the dash order between Moyer, Erb, Owens and fellow lock-ins: Brian Shirley, Jason Rauen, Kyle Bronson, Ashton Winger, and Brandon Overton.

Drawing the pole position of the 8-lap dash, 62-year old Moyer fended off 20-year old Ashton Winger into turn one and assumed initial command of the race, which set the lineup for Saturday's finale. Winger, who won his first career World of Outlaws race at Cedar Lake in July, made one move to the inside of Moyer on lap three before backing out and settling his Rocket Chassis No. 12 down.

Moyer made hay out front, while Winger's hands became full with a bolting Kyle Bronson and charging Brian Shirley hot on his heels. After going three wide at one point following a mega slider from Bronson, Shirley of Chatham, Ill. snuck through and scored the runner-up result. By virtue of his second-place effort, "Squirrel" starts on the outside pole of tomorrow's $50,000-to-win feature.

Continuing the unique tradition of the F.A.N.S. Fund Dash, a group of 12 drivers (voted on by fans) was selected to come partake in the 12-lap race. Featuring a total purse of $26,325 (all donated by fans), each driver in the F.A.N.S. Fund Dash received a minimum of $2,000 to help offset their expenses to come to the USA Nationals weekend.

Winning a close side-by-side battle with "Scrub" Rick Eckert, "The High Side Tickler" pounced and picked up the $2,500 victory aboard his Bilstein US No. 8 Longhorn Chassis. A win that, albeit coming in the dash, makes his trip to Cedar Lake Speedway worthwhile, and gives him a big confidence boost heading into tomorrow's Last Chance Showdowns.

With the field all set for Saturday's big dance, the attention turns to preparing race cars for the grueling 100-lap feature and the multitude of track chances they'll face.

"It'll go through a lot of different phases," Moyer thought on tomorrow's track. "We just have to be patient. I don't quite have the balance on this car where we need to be at. Tire management will be critical to win tomorrow, so we're gonna have to find some better balance to take care of our tires."

The 33rd annual USA Nationals will conclude tomorrow night at Cedar Lake Speedway with a big program of local late models and the World of Outlaws Morton Buildings Late Model Series, which is capped by the $50,000-to-win, $3,000-to-start feature. A drivers autograph session will take place on Saturday afternoon at 4:30pm on vendor row with all access for fans. Later in the evening, hot laps are slated to hit the track at 6:30pm CT.

Tickets are still available for purchase at the gates, or fans can watch from home with the DIRTVision Pay-Per-View ($29.99).