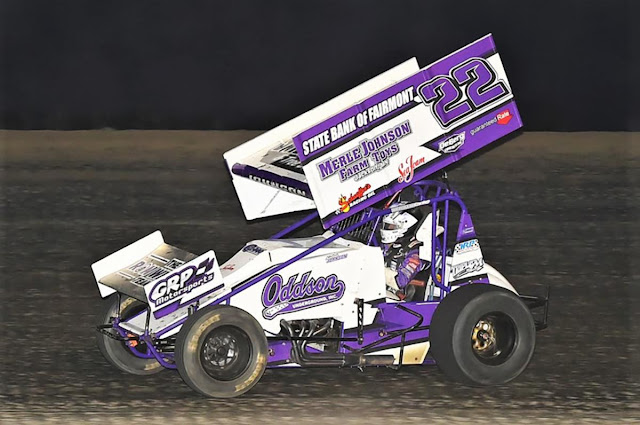 Inside Line Promotions - NORTH SIOUX CITY, S.D. (Aug. 25, 2020) - A top-10 run highlighted a challenging weekend of competition with the Midwest Power Series for Kaleb Johnson.
Park Jefferson International Speedway presented a different track surface on Saturday night than Johnson has been accustomed to at the facility.
"Saturday was probably the only time I've raced at Park Jefferson where the track was really heavy," he said. "After our heat we changed a bunch of stuff for the feature because we had anticipated the track being a lot slicker than it was."
Johnson took the green flag for the A Main from the 13th starting position after starting and finishing fifth in his heat race.
"The changes we made to the car worked pretty well and we moved forward," he said. "I got up to about sixth or seventh at one point, but the car got super tight in turns three and four and I went off the track, losing a couple of spots. I got back to sixth and was trying to pass the guy for fifth with two laps to go when the same thing happened. I lost two spots again and finished eighth. We had pretty good speed. It was just one of those racing deals."
Johnson battled a challenging track of a different type the previous night at Rapid Speedway in Rock Rapids, Iowa.
"The track was already slick in the heat race," he said. "I started on the outside in fourth. The bottom was the place to be. I spun my tires on the start and lost a spot before dropping to the bottom where it was pretty much follow the leader the rest of the race."
Johnson's heat race finish placed him 18th on the starting grid for the A Main.
"The track took rubber after about five laps and I had trouble finding it right away," he said. "After that it was pretty tough to pass with the rubber and I finished 15th."
With Knoxville Raceway in Knoxville, Iowa, recently cancelling the remainder of its season, Johnson will be idle from racing this weekend before competing in a doubleheader with the Midwest Sprint Touring Series in conjunction with the World of Outlaws NOS Energy Drink Sprint Car Series doubleheader at Huset's Speedway in Brandon, S.D., Sept. 5-6.
"I'm excited to be able to race at Huset's," he said. "It's nice to finally race at the track that's closest to home. I haven't had a lot of experience racing on short, tight tracks like that. I raced there once in a 305 sprint car and that didn't go so well. It's a technical track and can eat you up in a hurry. I'm sure there will be another big crowd there and it's always fun to race in front of lots of people. I'm looking forward to it."
QUICK RESULTS -
Aug. 21 - Rapid Speedway in Rock Rapids, Iowa - Heat race: 5 (4); Feature: 15 (18).
Aug. 22 - Park Jefferson International Speedway in North Sioux City, S.D. - Heat race: 5 (5); Feature: 8 (13).
SEASON STATS -
14 races, 0 wins, 2 top fives, 5 top 10s, 7 top 15s, 10 top 20s
UP NEXT -
Sept. 5-6 at Huset's Speedway in Brandon, S.D., with the Midwest Sprint Touring Series
MEDIA LINKS -
Website: http://www.kalebjohnsonracing.com/
Twitter: https://twitter.com/Kaleb___Johnson
Facebook: https://www.facebook.com/KalebJohnsonRacing22
SPONSOR SPOTLIGHT - Merle Johnson Farm Toys
Merle Johnson Farm Toys in Jackson, Minn., has been a buyer and seller of new and used toy tractors and diecasts around the Upper Midwest for more than 30 years. They also ship nationally and internationally. For more information, call 507-847-2798.
"Merle Johnson Farm Toys is owned by my Grandpa and Grandma," Johnson said. "They've been a supporter of my racing since I began in go-karts when I was 5-years-old. I'm really grateful for all of the support they've given me throughout my racing career."
Johnson would also like to thank GRP Motorsports, Oddson Underground, JF Capital, Snyder Tree Service, State Bank of Fairmont, Sea Foam, Schaeffer's Oil, Hepfner Racing Products, DeBerg Concrete, Big Al's Diecasts, The Ron Weber Team, DeBerg Flooring, Guaranteed Rate - Mike Brudigan Home Loans, Dave's Lawn Care & Landscaping, Triple M Trucking, Last Deck and Marthaler Dodge for their continued support.
INSIDE LINE PROMOTIONS -
Inside Line Promotions specializes in affordable public relations and media management for motor sports drivers, teams, sponsors, tracks, series, events, organizations and manufacturers. ILP Founder Shawn Miller leverages professional journalism with new media technologies and social networking to improve your exposure and the return on investment for your sponsors.
To meet the media relations needs of your program by joining Team ILP, contact Shawn at 541-510-3663 or Shawn@InsideLinePromotions.com. For more information on Inside Line Promotions, visit http://www.InsideLinePromotions.com.
*PHOTO BY ROB KOCAK PHOTOS*
Posted by Bill McIntyre at Wednesday, August 26, 2020