Marks Gets To Williams Grove Victory Lane, Locke And Drevicki Round Out Trio Of Winners 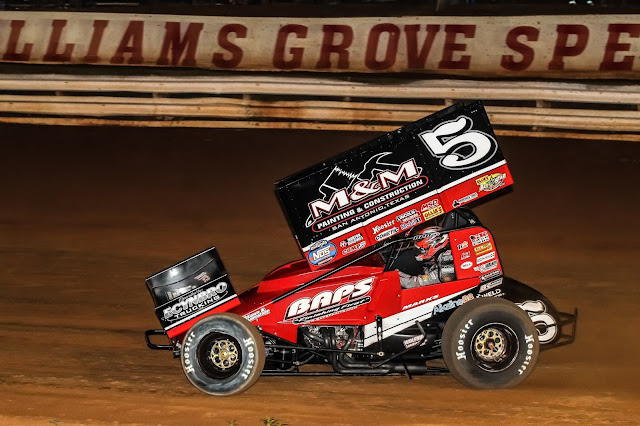 Marks of Myerstown started fourth in the 25-lap 410 sprint feature while Brian Montieth started on the pole.

And Phoenixville’s Montieth jetted into control when action began with Marks motoring up to second on just the second lap.

The frantic pace set by the leaders was slowed with six laps completed for a slowed Tyler Ross on the frontstretch.

The restart saw sixth starter Matt Campbell make a two car pass to move from fifth to third before another yellow bunched the field on the seventh tour.

The race would then go green all the way to the finish with Montieth running the cushion, doing his best to stay ahead of Marks, who was slamming the cushion as well.

But as the cushion-running leaders entered the rear of the field on lap 14, Marks began to slowly close on Montieth as he ran up on a pair of cars racing side by side for position.

With 10 laps to go, the pair was side by side at the line for the lead before Montieth pulled ahead.

Marks then regrouped for another run at the pacesetter and with five laps to go, he had caught Montieth again as the pair again crossed the line side by side again with Marks having just a nose into the lead.

But Montieth reclaimed command as the pair shot into the first turn only to see Marks go back out in front in the second turn before pulling Montieth back to the line with the pair again racing side by side with three laps left.

However Marks surged ahead this time around to get away just enough in order to prevent Montieth from slipping back by.

“That was a really, really hard race,” points leader Marks said, “One of the hardest I’ve had to race in a while.”

“I was just trying everything I could possibly do. I thought I lost the race there at one point.”

Three attempts to get the 358 sprint main started were made before the first lap could be scored but when it had, polesitter Cody Fletcher was leading the field.

His run at the front was short lived however as second starter Derek Locke took over with two laps down.

The race was halted on the third lap when Russell Hammaker flipped in the third turn while others involved included Dave Brown Jr., Wyatt Hinkle and Nat Tuckey.

Eighth starter Doug Hammaker raced into second by lap seven and was chasing leader Locke when he entered traffic with nine laps to go in the 20-lapper.

A final caution flag with three laps to go gave Hammaker a clear shot at the leader but Locke moved down entering the first turn when action resumed to prevent a challenge from Developing to his inside.

Prior to that point, Locke was working the top while Hammaker bit into the lead using the low side.

Locked ended up taking the win for his second in a row, his second of the season and the second of his career at the oval.

Bill Unglert started on the pole of the 25-lap USAC East 360 sprint main and led over Carmen Perigo Jr. when the race began.

Steve Drevicki, who entered the race as the tour point leader with two wins already this season, began the race in sixth.

Eighth starter Alex Bright moved into second behind Unglert on the ninth lap before Drevicki slid into the second spot on lap 11 using a slide job.

Drevicki then went to work on Unglert, taking the lead in the fourth turn with 10 laps to go before a caution flag regrouped the field.

Bright and Unglert swapped the second spot on laps 16 and 17 before Bright finally secured the spot.

A final caution flag with five laps to go put Bright on Drevicki’s tail and although he was able to get alongside Drevicki in the turns when action resumed he was never able to make a pass with Drevicki instead pulling away to the finish.