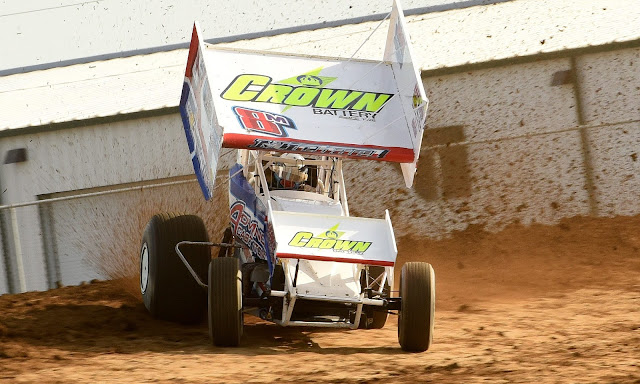 FREMONT, Ohio (August 10, 2020) – For the second time in as many starts, the ‘Texas Traveler’ T.J. Michael finished fifth at Attica Raceway Park, doing so during another round of Attica/Fremont Championship Series (AFCS) competition on Friday evening, August 7.

An exciting end result, nonetheless, Michael’s route to a top-five was far from easy, forced to power through the evening’s B-Main after missing a transfer position during his respective heat race. A fourth-place finish during the AFCS B-Main allowed Michael to start 20th on the main event grid. Not distracted by the starting position, Michael battled forward, capping the 30-lap contest in the fifth position, also earning the evening’s Hard Charger Award.

Unfortunately, the chance to earn another top-five result on Saturday night at Wayne County Speedway was cut short due to a flat tire. Michael was battling in the third spot when tire troubles surfaced.

“I can’t say enough about this team right now. We had a lot thrown at us this weekend, but we pushed through and battled ahead for a top-five. That says a lot, especially at a track like Attica,” Michael said, driver of the Michael Motorsports, Advanced Architectural Stone, Crown Battery, Fremont Fence Company, Pro-Tech Services, Wood Heating and Air Conditioning, Kear’s Speed Shop, Wings Unlimited, Big D’s Pizza, No. 8M sprint car. “Our goal is to keep this momentum going and contend for some wins in the coming weeks.”

T.J. Michael and Michael Motorsports will celebrate their hard charging performance with a weekend away from competition. The team plans to return to action with starts on Friday and Saturday, August 21-22. An exact schedule will be determined at a later time.

Keep up with TJ Michael during his entire campaign right here at the official online home of Fully Injected Motorsports – www.FullyInjected.com. Be sure to follow Michael on all of the available social media networks including Twitter: @TJMichael8.