MODIFIED ELITES: Hoffman, McKinney Detail Friendship as Competitors on the Road 2020 Summit Modified points leaders prepare to engage in a battle for the championship 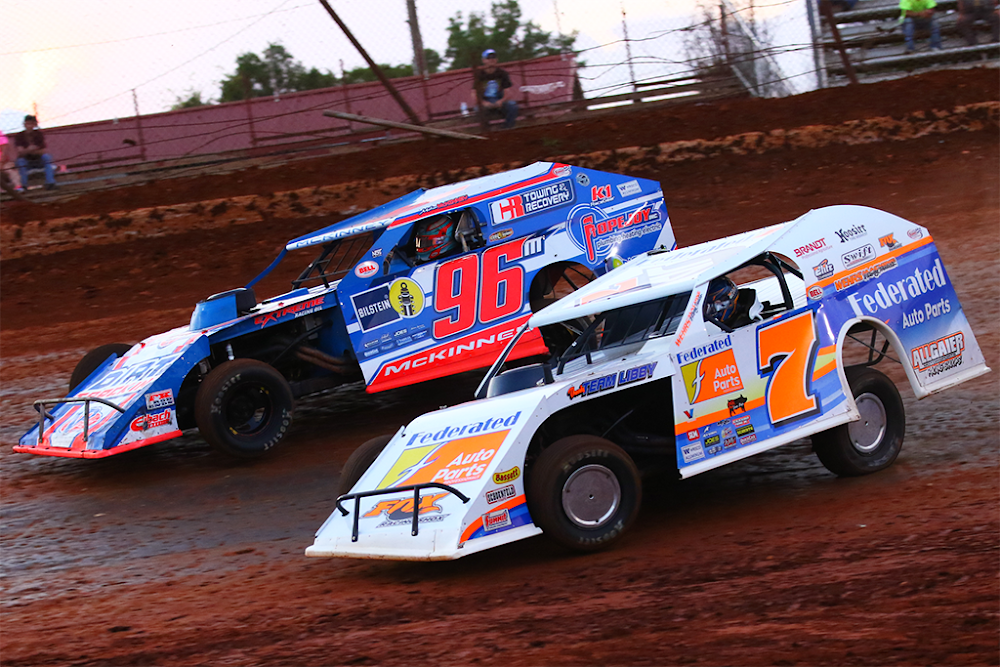 CONCORD, NC – August 7, 2020 – Halfway through the 2020 DIRTcar Summit Racing Equipment Modified Nationals season, 64 percent of all Feature events contested have been won by either Nick Hoffman or Mike McKinney.

In each of his eight starts, Hoffman has yet to finish worse than second. He currently sits atop the tour points standings, 96 points ahead of McKinney with five wins, leading all other drivers in top-five and top-ten finishes with eight.

McKinney is second only to Hoffman in each of those categories with four wins, six top-fives and six top-10s. Of the 15 different tracks on the remaining schedule, McKinney has Summit Modified victories at four of them, including one he’s won at already this season in tour action – Fairbury Speedway.

The two drivers return to action with the rest of the Summit Modified field in the Phase II opener on Monday night, Aug. 10, for the rescheduled visit to The Bullring at RICO Fairgrounds. Catch all the action alongside the DIRTcar Summer Nationals Late Models live on DIRTVision presented by Drydene with a Fast Pass subscription.

While McKinney and Hoffman are fierce competitors on the track, they share one of the most unique professional and friendly relationships off the track as well.

“Nick and I have been really close for 10-12 years now,” McKinney said. “I’ve been running his Elite Chassis since the start of [my UMP Modified career] in 2013. But I’ve known Nick way before he did the chassis thing, I was there helping him come up with the name and the logo.”

Hoffman founded his own DIRTcar UMP Modified chassis business in his hometown of Mooresville, NC, during the 2012 season. Several other big names in the UMP Modified world have driven the Elite Chassis brand since its establishment, including Tyler Nicely, Will Krup and NASCAR regular Justin Allgaier.

McKinney was one of Hoffman’s first few customers upon Elite’s establishment eight years ago. But their friendship first turned into a professional bond before McKinney ever stepped foot inside a UMP Modified.

“In 2012, I drove Nick’s personal Modified down in North Carolina,” McKinney said. “I had a really bad wreck in my Stock Car, and I was going to be out for a couple weeks. Nick gave me a call and an opportunity to run his backup car at County Line Raceway. We went down there and I think I ran fifth or sixth. So, he gave me my first opportunity to move into a Modified.”

Before his own days as a UMP Modified star, McKinney made a name for himself in the DIRTcar Stock Car ranks, capturing the 2012 DIRTcar national points title and the most wins of any driver that year with 18. Once Hoffman fitted him for a UMP Modified that same year, McKinney knew it was time to make the jump.

“From 2012-2013, I was looking to get out of Stock Cars and that was the same time [Hoffman] was starting his chassis company. So, it was kind of a seamless transition knowing I had a chassis builder to lean on.”

Hoffman has since become one of the most dominant dirt track racers in the country, with two Summit Modified titles and his first DIRTcar UMP Modified national points title awarded last year. He said it’s great publicity for his company, and it also helps having another headline driver in his corner as well.

“[McKinney’s] one of my best friends, and a customer of mine. Also, Will Krup has been running really well too. Mike’s good everywhere you go, and I’m glad he made the trip out and we can race together. It helps your program, so when we do get back to Illinois and we gotta run on some slicker racetracks and some stuff that takes a little bit of racecar, you’ve got all your ducks in a row,” Hoffman said.

The publicity Hoffman has brought to his Elite brand via his and others’ appearances in Victory Lane has brought an abundant amount of business into the shop, despite the pandemic’s effect on the 2020 racing season.

“With guys like Justin [Allgaier] and Mike [McKinney] running my cars, it’s really big. Right now, we’re so far backed-up on cars that I can’t take any more orders. I’ve been getting guys calling me every day and right now I’ve gotta turn them away, just because I want to be racing and we’re only going to build X-number of cars every year,” Hoffman said.

While Hoffman dominated the Summit Modifieds tour last year with a record 13 victories in a single season, 2018 was McKinney’s turn out front.

Coming into the 2018 Summit Modified championship weekend at Fairbury’s Prairie Dirt Classic, McKinney held only a four-point advantage over Mike Harrison after maxing-out his Feature win total at eight with a victory just two weeks prior at Oakshade Raceway. Harrison took the checkered flag in his Showdown Feature at FALS on Friday night while McKinney finished fifth, forcing him to transfer to Saturday night’s season finale through a Last Chance Showdown.

This evened-out the points battle going into Saturday night and put Harrison in control of his own destiny. Harrison had to win the Feature to win the championship, regardless of where McKinney finished. Coming from seventh, Harrison pulled it off, scoring the Feature win and the sixth Summit Modified championship of his career while McKinney was left to face reality.

Looking back, McKinney’s got no sour attitude about the finish of 2018. In fact, he’s learned from it. Scaling back on his racing ventures last year, McKinney’s back and more focused than ever as he continues his quest for that first championship in 2020.

“The only thing it tells me is that I can do it,” McKinney said with visual confidence. “[2018] was really our first year actually going out and being that competitive on a national level. Knowing I can be that competitive just drives me to keep doing it. We’re making a really hard push this year, and it got off to a great start.”

Ninety-six points is currently all that separates McKinney and a chance at his first tour championship. With 15 Feature races remaining until a champion is crowned, The Magic Man is ready to compete against one of his best friends and biggest rivals night-in and night-out.

“There’s a lot of good races left in this second half that I feel like we can compete at, and I know I’ve definitely gotta get a few more wins if I want to win this deal. We’re rolling into a lot of racetracks that I have a lot of confidence at, hopefully we can just put it all together.”

Don’t miss the start of Phase II for the DIRTcar Summit Racing Equipment Modified Nationals on Monday, Aug. 10 as the tour makes its debut at The Bullring at RICO Fairgrounds, live on DIRTVision presented by Drydene.

DIRTcar Summer Nationals is brought to fans by many important sponsors and partners, including: Arizona Sport