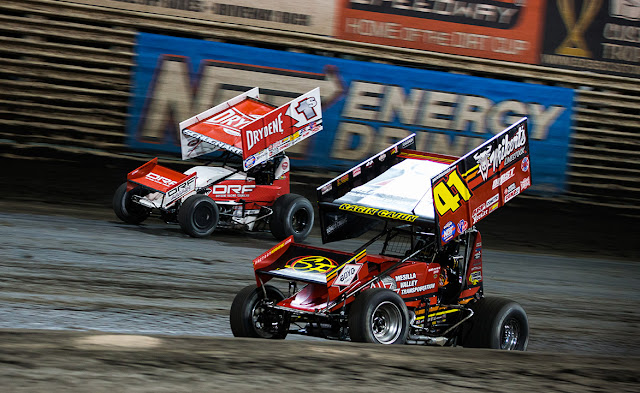 Logan Schuchart and David Gravel left the three-day event at Knoxville Raceway with big gains and a lot to lose.
Schuchart reclaimed the World of Outlaws NOS Energy Drink Sprint Car Series points lead – now 18 points ahead of reigning Series champion Brad Sweet – and David Gravel helped propel Jason Johnson Racing to second in points for the team championship – four points behind Schuchart’s Shark Racing team.
With just 21 races left this season – including the North Dakota doubleheader this weekend at River Cities Speedway on Aug. 21 and at Red River Valley Speedway on Aug. 22 – both drivers are focused on winning and securing the best points nights they can every race in their championship quests.
“We want to win races,” said Schuchart, of Hanover, PA. “That’s why we’re out here. Each and every race track we go to that’s our goal. You also want to stay smart about it.”
Logan Schuchart / Trent Gower photo
Schuchart learned firsthand how detrimental a small mistake could be to his chances of winning a championship in June. While running second and trying to chase down Sweet at Beaver Dam Raceway, Schuchart jumped the cushion and got into the wall. He finished 21st and fell from first to third in the championship points.
“That’s the kind of stuff you don’t do,” he said. “I know if we lose the championship by five points my grandpa (Bobby Allen) is going to say ‘I told you so.’”
Gravel isn’t in contention for the driver championship, since he missed two races to run an ARCA and NASCAR Truck Series race, but with Parker Price-Miller filling in for him in those two races, JJR has been able to stay in contention for the team championship. The team currently has four wins this season with Gravel, including their most recent win at Knoxville Raceway.
For Gravel, the remainder of the season is about picking up more wins and helping JJR secure their first championship.
“Obviously, if I can help JJR propel and win a championship is something really cool for me,” said Gravel, of Watertown, CT. “I’m kind of torn as how the season has gone. I’m going to try my best. I try my best every night and see where it ends up. There’s still a lot of racing to go. We’re racing every weekend until the World Finals (at the Dirt Track at Charlotte) pretty much, so a lot could happen.”
Like Schuchart, Gravel knows it takes being fast and smart to secure a championship. And a bit of luck.
“You just got to keep rolling,” Gravel said. “You could be Brad Sweet and have [four] DNFs. You’ve got to enter every night, do the best you can and see what happens.”
David Gravel / Trent Gower photo
The best Schuchart has ever finished in the Series points is fifth last year – with eight wins. So, to be leading the points – and have five wins – with two and a half months to go is already a huge accomplishment in his eyes for he and his Shark Racing team that have gone from trying to make races in 2014 to now being in contention to win every week.
“It’s just a great position to be in during this time of the year,” Schuchart said. “You know you’re doing something right. Especially with our team, where we’ve come from in the last seven years and how hard we’ve worked to put ourselves in this position. My grandfather, Bobby Allen, has built an awesome team and everyone that’s a part of it is doing a great job. To be leading the points here in August says a lot about how far our team has come.”
River Cities and Red River Valley have been good tracks for Schuchart and Gravel. Schuchart picked up his first win at River Cities in June of last year and then finished third at the speedway last August. Gravel, who won at River Cities in 2017, also finished inside the top-five during both races at the quarter-mile track last year.
The Series will make its first trip back to Red River Valley Speedway since 2018 this weekend. The race was won by 10-time Series champion Donny Schatz, but Gravel was in contention to win throughout the event before having an issue and finishing 18th. Schuchart finished fifth in that event.
While they’ll be gunning for the win every race, they’ll also be careful to not lose the points they’ve earned to put them in the position they’re in.
Tickets for River Cities Speedway on Fri., Aug. 21 can be purchased by clicking here. And tickets for Red River Valley Speedway on Sat., Aug. 22 can be purchased by clicking here.
If you can’t make it to the track, you can watch both races live on DIRTVision.
Posted by Bill McIntyre at Thursday, August 20, 2020