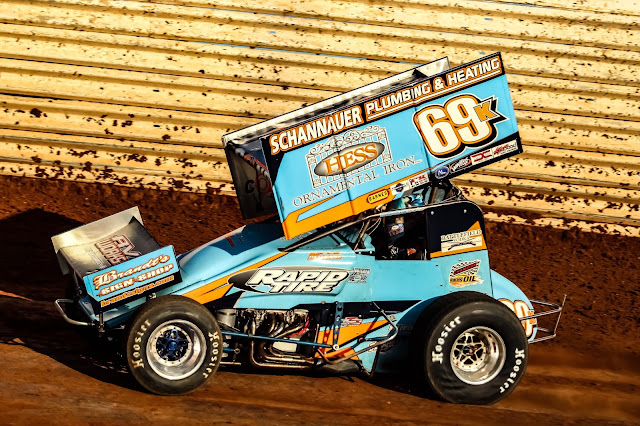 After a weekend hiatus, Saturday night It will be the 14th Annual Living Legends Dream Race at Port Royal Speedway featuring the Weikert’s Livestock 410 Sprint Cars and the River Valley Builders Super Late Models.
The two divisions combined purse will be over $70,000 with $10,000 on the line for the winner of the Sprint Car A-main and $3000 on the line for the winner of the Super Late Models. The late model show will be sanctioned by the ULMS Racing Series and serves as a make-up for their event that was cancelled earlier this season because of COVID-19.
Traditionally the race honors one or two “Living Legends” from the past of the speedway, however this year there will be a unique special presentation in its place that will take place prior to racing activities for the night.
The first ever Dream Race was held in 2007, where Sean Michael triumphed in a very popular and emotional win driving for the late Jim Nace in his #6 Sprint Car. Since then Greg Hodnett (2), Cody Darrah, Chad Layton, Blane Heimbach, Ryan Taylor, Brent Marks, Rick Lafferty, Lance Dewease (2) and most recently AJ Flick have all won the prize event.
For the 410 Sprint Cars there will be a featured full purse of over $55,000 and it will pay $500 to start. The main event offers over $35,000 throughout the field and traditionally is the highest paying unsanctioned purse in the state.
The event includes a unique format featuring twin 16-lap semi mains carrying full purses that help set the feature lineup. Winners will earn $2,000 for their efforts, $200 to start and nearly $10,000 makes up the purse for each Semi.  Longtime promoter and racing announcer Ted Reitz is a main sponsor for the semi-purses.
Time trials set the semi lineups via an inversion draw with odd and even qualifiers making up each semi and the top-10 for each advancing directly to the evenings A-main. Packers Concessions is providing a $100 Fast Time Award for the pole sitter of each semi. The top three in each semi will advance to the re-draw. There will be a fan vote for a 25th starter as well. To be eligible, the driver must finish the B-Main and be a non-qualifier.
As traditional, thousands of dollars’ worth of contingency prizes are also given out throughout the night and there will be enough to guarantee each driver receives something. This includes 4 Right- Rear Tires courtesy of Hoosier Racing Tire, One free set of Penske Racing Shocks, 2 engine dynos via Rider Racing Engines, 1 engine dyno courtesy OF Don Ott Racing Engines, 4 $100 certificates via Diversified Machine Inc., 25 $25 certificates via Kreitz Oval Track Parts and 3 $100 certificates towards a top wing via Vortex Racing Products.
The late model purse features close to a $12,500 purse with A-Main qualifiers guaranteed $250 to start. On top of the previously announced $3000 winner’s share, the winner of this year’s event will earn themselves a guaranteed starting spot in the Frank Sagi Tribute Race held August 16th at Hagerstown Speedway in nearby Maryland.
There will also be a Kid’s Money Scramble courtesy of Pennian Bank for Kids 11 and Under. Kids will assembly in the infield during time-trials where $500 in coins will be up for the taking. We will also have a candy scramble as well at the same time.
Admission Prices
$30 GA, $15 STUDENTS, $40 PITSS
Gates Open at 4:00PM, Racing at 7:00pm
Posted by Bill McIntyre at Saturday, August 01, 2020