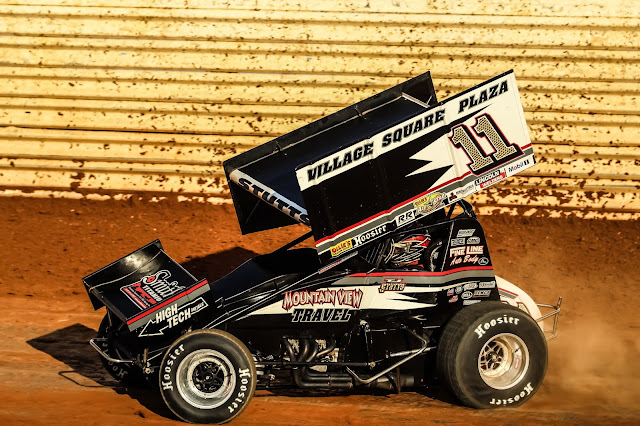 The night will be the annual ‘Salute to the Military’ night and all military veterans will receive FREE ADMISSION with a proper government military ID card or DD-214 form. Bob Timney, a military veteran from State College, Pa., who goes by the stage name of ‘Sgt. Bob’, will sing the national anthem and will provide free music entertainment presented by Butler Hill Maple Farm on the stage just outside of the frontstretch entrance gates next to the ticket offices from 4-6pm EST.

Along with the salute to the military, the track will also pay homage to late engine builder Curt Hershey. Hershey was the owner of Hershey’s Racing Engines and produced powerplants for many 410 sprint cars, dirt late models and 305 sprint cars throughout the years. He was described as an asset to the racing community and his support and engines guided many of driver’s careers who have raced at the speedway over the years. He passed away June 23rd at the age of 58 and is missed dearly.

In the 305 division, the hard charger award will be worth an increased $200 courtesy of Penns Valley Meat Market and CG Racing Engines and Newlin’s Bar Service will be handing out a torsion bar cleaning tool to the highest finishing driver using a Hershey’s Racing Engine. If one of those drivers can win the feature, they will also receive an additional $44 from Newlin’s.

In Weikert’s Livestock 410 Sprint Car competition, Logan Wagner enters the weekend with a narrow 40-point advantage in the season standings over his father Mike Wagner. AJ Flick (-210), Anthony Macri (-250) and Brent Marks (-265) make up the top five. The most recent winner at the speedway in the division was Kyle Larson back on July 19th.

Colton Flinner is the current points leader for the River Valley Builders Super Late Models, and he hold a slim 15-point advantage over Trevor Feathers. Andy Haus (-55), Dylan Yoder (-80) and Mike Lupfer (-140) fill out the top-five. Gregg Satterlee currently is riding a wave of three victories in his last four appearances at the track and if in attendance will likely be the favorite.

Finally, in the Penns Valley Meat Market PASS/IMCA 305 Sprint Car division Garrett Bard holds down the point standings lead by 75-points over Doug Dodson. Erin Statler (-140), Nick Sweigart (-145) and last year’s champion Ken Duke (-155) make up the top five. Bard has two victories in three races at the speedway in 2020 and will be looking to further stretch his lead this weekend.

Please note that we are continuing to operate under CDC Guidelines and encourage all patrons to wear masks and practice proper social distancing measures. There will be sanitizer stations located throughout the facilities and if you do not feel well, we encourage you to stay home and watch via PPV on www.FloSports.tv