Sammy Swindell to pilot the Dobmeier Racing/BWW No. 13 at World of Outlaws events in N.D. & S.D. 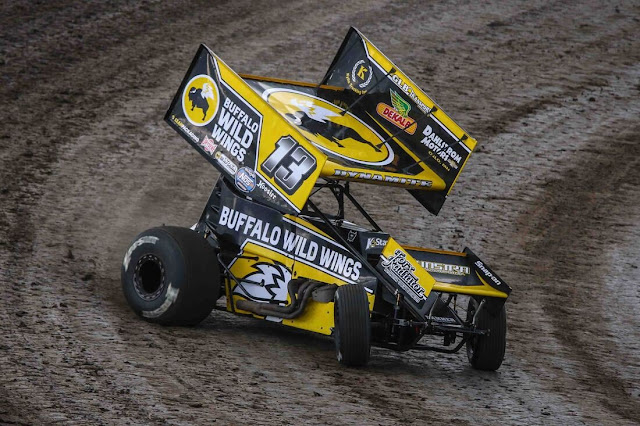 By Mike Spieker
GRAND FORKS, N.D. (August 17, 2020) – The Dobmeier Team 13 / Buffalo Wild Wings machine will make it’s highly anticipated return this coming weekend with one of the best ever to drive a Sprint Car behind the wheel. Three-time World of Outlaws Sprint Car champion, Sammy Swindell, will be driving the Dobmeier Racing entry at this weekend’s World of Outlaws event at River Cities Speedway in Grand Forks and Red River Valley Speedway in West Fargo, N.D. Swindell will also pilot the Dobmeier No. 13 during the World of Outlaws doubleheader at Huset’s Speedway in Brandon, S.D. on September 5-6.
“It felt like it was the right decision to make for our team, sponsors, and fans to keep our presence at our local World of Outlaws events,” said Dobmeier of the move to put the World of Outlaws’ second-most winningest driver in the seat for the Outlaws’ swing through the Dakotas. “Obviously, the Swindell name was one of the names on our list and everything worked out with Sammy’s partial schedule this year so it was the perfect fit. The Swindell family reached out to us when I was in the hospital. Amy Swindell helped me and my family through a lot of stuff and was a great help and great supporter.”
Dobmeier was injured during the World of Outlaws event at Cedar Lake Speedway in early July, but he said he wanted to find a way to continue the season for his team.
“It’s going to be very bittersweet,” said Dobmeier of what it’s going to be like having to watch his car in action at his home tracks. “I can’t be in the actual action, but I still want to be a part of it and be around. [Sprint Car racing is] what I eat, sleep and breathe.”
For Dobmeier, putting Swindell in the car seemed like a natural fit.
“He’s definitely a legend in the sport. He knows his stuff and his resumé speaks for itself,” said Dobmeier. “It’ll be entertaining to see his take on things and I hope that we work well together right from the get-go. Hopefully, we can learn a few things from him and maybe he’ll take away a few things from us.”
Swindell has collected a combined total of 17 wins at the three tracks he’s slated to compete at with Dobmeier Racing, including nine at Huset’s and seven at Red River Valley Speedway. Swindell was the inaugural winner with the World of Outlaws at Red River Valley in 1981.
“We’ve always had a good time up there,” said Swindell of his past experiences racing in North Dakota. “I know I’ve won quite a few races at the old Fargo track,” continued Swindell, referring to Red River Valley Speedway’s original half-mile oval. The track was converted to a three-eighths mile in 2010. Swindell was the winner of the first World of Outlaws event on the three-eighths mile in 2012.
Swindell was also the winner of the World of Outlaws’ inaugural event at Huset’s in 1983. From 1990 through 1992, Swindell was dominant at Huset’s, winning five of six events over that span, including four in a row.
“I’ve always run good there. It’s always a fun track,” said Swindell of the high-banked Brandon, S.D. speedway. “It’s sort of similar to the track I started at close to home at [Riverside International Speedway in] West Memphis, Arkansas. I had a lot of laps on that track. Since the two are so similar, that made the transition to Huset’s much easier.”
Swindell expects the transition to be smooth as he’ll be driving a former Thone Motorsports Maxim that he built last year.
“That’s almost exactly like that car that Kevin [Swindell] has that I’ve been running,” said Swindell, who has been running his son’s No. 39 machine in 2020. “That’ll definitely make everything a lot easier. I’m looking forward to seeing the fans and the people up there. Hopefully, we can have a good, clean weekend and maybe pull off a win along the way.”
Mark and the entire Team 13 Racing crew would like to thank all their sponsors for their continued support!
Buffalo Wild Wings Lunstra Motorsports Dahlstrom Motors Inc. DEKALB Asgrow Seed Dammer Trucking K-Star Ag Services Lean Packaging Snap On Steve Danielle’s Cleaning Service Forx Radiator Kyllo Trucking Energy Release GLB Transport Thone’s Utility Construction
Posted by Bill McIntyre at Tuesday, August 18, 2020