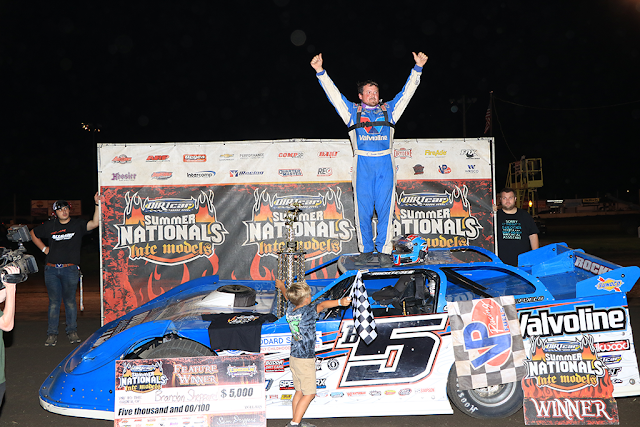 LINCOLN, IL – Aug. 16, 2020 – He started off Arizona Sport Shirts Week #4 Tuesday night without a single start on the tour this year.

Brandon Sheppard capped off a magical week of racing his family-owned #B5 on the DIRTcar Summer Nationals tour Sunday night at Lincoln Speedway with his fourth Feature win in six days, topping Frank Heckenast Jr. in a late-race battle for the lead to capture the $5,000 prize and an extra $2,000 as the Week #4 champion.

“It was a lot of fun,” Sheppard said of the big six-day stretch he completed with the Summer Nationals. “I hope they do a streak like this again next year that I can do. These places that are all within two hours of my house – all some of my favorite racetracks, and they all produce really great racing.”

While the 2013 Summer Nationals champ enjoyed the facilities he visited this week, he also faced a ton of great competition, and the regulars came out to play again Sunday night.

Sheppard started on the pole for the 40-lap contest and jumped out to a comfortable lead in the opening stages, but soon encountered the wrath of lapped traffic as he neared the halfway point.

As he crossed the line to complete Lap 14, Sheppard closed in on another sizable group of slower cars, occupying multiple lanes on the track. As he got into Turn 3, Sheppard tagged the rear of Tim Lance and got up over the cushion, slowing his momentum enough for Heckenast to scoot by underneath.

The incident was actually enough to damage the nose of his car, which he had no choice but to deal with for the remainder of the race.

“I had the nose rubbing pretty good but I just kinda fought through it. I was really tight, and I couldn’t steer through the center with the nose dragging the left-front. I just got up on the wheel, up on the cushion and made it happen,” Sheppard said.

Heckenast raced into the lead and led the field around for several laps before a caution flag was thrown on Lap 27, erasing the lead he was maintaining in traffic and putting a hungry Sheppard right on his rear bumper.

It didn’t take long for the #B5 to reclaim what was once his, throwing a big slide job on the #99jr in Turns 3-4 on Lap 32 to regain the top spot. Once it was his again, there was no catching B-Shepp.

Sheppard led the field back around to the checkers untouched for the 24th time in his Hell Tour career, much to the delight of his ever-present home-state fans in attendance.

Heckenast hung on for second while Shannon Babb crossed the line with the final podium spot. Jason Feger was fourth and Sylvester, GA’s own Steven Roberts finished-up the best race of his 2020 Summer Nationals campaign in fifth.

Brian Shirley, Sheppard’s dueling partner throughout Arizona Sport Shirts Week #4, was in very rare form Sunday night after hitting the wall in his Heat Race, sending him to the pits with significant right-side damage to his Rocket Chassis #3s. The crew made repairs to start the Feature from 19th on the starting grid, but bad luck struck the Bob Cullen Racing team again as Shirley got a piece of the big wreck in the opening laps, sending him to the infield with too much damage to continue.

The DIRTcar Late Models are off Monday night for the final regroup day before Racing Electronics Week #5 of competition begins on Tuesday, Aug. 18 at Kankakee County Speedway in Kankakee, IL. Catch every lap of action LIVE on DIRTVision presented by Drydene.

Even with a bit stiffer competition in the house, Nick Hoffman still reigns supreme.

The two-time and defending DIRTcar Summit Racing Equipment Modified Nationals champion locked-up his ninth Feature win of the season Sunday night at Lincoln Speedway, outlasting the six-time tour champ Mike Harrison in a high-traffic battle for the lead late in the race.

Hoffman jumped to the early lead in his Justin Allgaier-owned #7 Elite Chassis but hadn’t yet established the big lead he so often opens up when at the head of the field. This left the door open for second-running Harrison, who pounced at the opportunity on Lap 9 and took the lead on the high side.

Banging his wheels off the cushion and the wall, Harrison led for the next nine laps with Hoffman right on his tail. Harrison kept favoring the high side, even in traffic, as Hoffman tried to make up the ground down low.

The two were then met with three lapped cars all in a battle of their own, occupying all three lanes on the track. Racing down the frontretch, Harrison kept it up top but made contact with Brian Diveley, sending him into the tractor tires at the edge of the outside wall. Hoffman had regained the lead at the flag stand right as the caution flag flew.

On the ensuing restart, Harrison scraped the outside wall coming out of Turn 4. He bobbled a bit getting into Turn 1 and hit the wall again as he slowed in Turns 3-4, taking his #24H pit-side and retiring from the race.

This cut the pressure from behind Hoffman, and he took advantage, bringing his #7 all the way back home for the $1,500 victory and ninth time this year.

“I knew if I pressured him enough, I’d get him to make a mistake,” Hoffman said of his battle with Harrison in Victory Lane. “He’s the best there is in the country running that top side, but if I could just stay right there with him… it’s too tough and brutal up there tonight to not make a mistake.”

The Summit Modifieds are off Monday night for the final regroup day before Racing Electronics Week #5 of competition begins on Tuesday, Aug. 18 at Kankakee County Speedway in Kankakee, IL. Catch every lap of action LIVE on DIRTVision presented by Drydene.