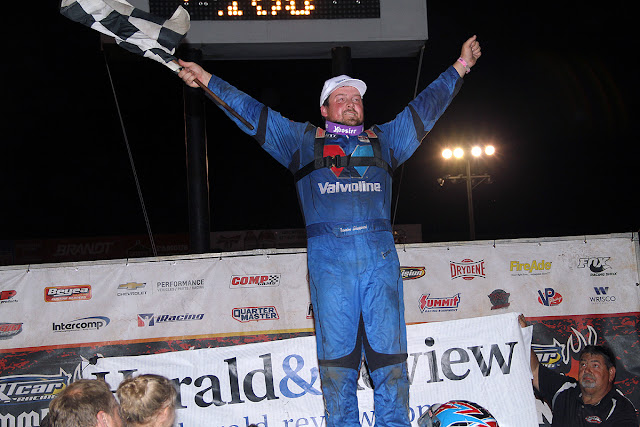 On Thursday night at Macon Speedway, he put every bit of that patience to good use, passing DIRTcar Summer Nationals points leader Brian Shirley in traffic for the lead on Lap 81 and carrying it all the way home for his first career victory in the Herald & Review 100.

The 2013 DIRTcar Summer Nationals champion grew up spectating and racing on the “Mighty” Macon Speedway, climbing behind the wheel of his father Steve’s backup Late Model at Macon for the first time at just 14 years old. Ever since that day, it’s been his dream to win the big races like the Herald & Review 100. Now, he’s finally achieved it.

“It feels really good, I’ve been trying to win this race for a long time,” Sheppard told Summer Nationals announcer Ruben Mireles in Victory Lane. “I know this place means a lot to me and my family and friends. I’ve got a lot of family here tonight… that’s what it’s all about for me racing – family.”

Sheppard played the waiting game through the first 80 laps, trailing leader Shirley through thick lapped traffic and a few caution flags as they weaved in-and-out of numerous waves of slower cars. One thing to note about the gap between the two leaders – Sheppard never let Shirley get too far ahead in traffic.

A caution flag just past the halfway mark bought the leaders a breather and erased Shirley’s sizable lead – one he had used to lap up to the top-six drivers in the running order. Once again, Sheppard took the green on the restart and never forced the issue. Rather, he was patient and got his primetime opportunity in lapped traffic as the leaders approached 20 laps-to-go.

Shirley continued to run the high side as he had done all race while Sheppard kept it fast and smooth on the bottom. Shirley then reached the back of the slower Rusty Griffaw and spent one lap too many trying to get around him. That’s when Sheppard pounced.

The #B5 Rocket Chassis stuck like glue to the bottom lane and drove off of Turn 4 with the lead. But it wasn’t exactly over yet.

Sheppard’s 3+ second gap over Shirley in the closing laps was erased as the caution came out with two laps remaining. Sheppard stared down the green-white-checkered finish and handled it like all pros do, holding off Shirley and the competition behind him for his second $5,000 Hell Tour victory this season and second in three days.

“We’ve been getting our butt whooped here for a long time,” Sheppard said. “We could win a Heat Race and start up front, but we could never seal the deal. Tonight, I was just really patient. I didn’t knock the deck out, not that I know of, maybe a little bit…

“I just bided my time there and didn’t use up my tires. I was really easy on them in the first part of the race, then I saw Brian [Shirley] starting to fade a little bit and I knew it was my chance to try and make something happen.”

Shirley held onto second and increased his points lead over the rest of the field while Jason Feger crossed the line third, also making up some points in the standings on Frank Heckenast Jr., who had a tough night in 11th. Former Herald & Review winners Shannon Babb and Dennis Erb Jr. completed the top-five.

The DIRTcar Summer Nationals action continues Friday night at the Fayette County Speedway for Round #19 of DIRTcar Late Model action. Catch every lap live on DIRTVision presented by Drydene.

Like a lot of other tracks on the DIRTcar Summit Racing Equipment Modified Nationals circuit, Mike Harrison’s win at Macon Speedway before and had no problem doing it again Thursday night.

Taking the lead from Jacob Rexing on Lap 3, Harrison put on another clinic as the defending winner of the Summit Modifieds race at Macon, leading the field back to the checkered untouched for his 52nd career tour victory.

“A few years ago, we figured something out here, and we just keep going back to that,” Harrison said in Victory Lane. “As long as I keep the wheels underneath it, the nose clean and all the air in the tires, it’s hard to beat this car right now.”

A few multi-car jingles got the race off to a slow start, forcing Harrison to be efficient with passing. He did exactly that, going from third to the lead inside of five laps.

Once Harrison cleared Rexing for the lead, only a few cautions occurred, forcing the six-time Summit Modified champion to only have to deal with restarts as the leader sparingly. Nonetheless, he was flawless on them, successfully defending the lead and his $1,500 top prize as he heads for Fayette County Speedway for more Summit Modified action on Friday.

Two-time and defending Summit Modified champion Nick Hoffman broke his streak of top-two finishes on the year after suffering a rare DNF. He completed a total of 17 laps before calling it a night after racing inside the top-10 early on.

Jeff Leka had a great run going in second, but the laps eventually wound down and his charge for Harrison was thwarted by the checkered flag. Ray Bollinger completed the podium while Rodney Standerefer and Jacob Rexing completed the top-five.

The DIRTcar Summit Modified action continues Friday night at the Fayette County Speedway for Round #19 of racing action. Catch every lap live on DIRTVision presented by Drydene.