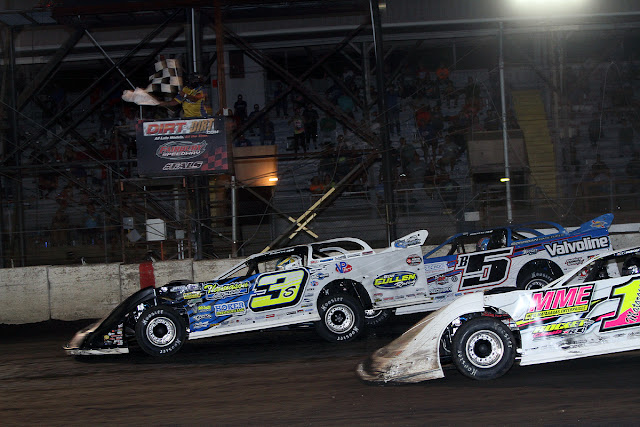 Brian Shirley, Brandon Sheppard and Frank Heckenast Jr. put on an instant DIRTcar Summer Nationals classic Wednesday night, battling it out with the rest of the field over 40 laps that ended with Shirley’s fifth Hell Tour win of the season by .090 seconds over Sheppard.

Heckenast led the opening laps before outside polesitter Ryan Unzicker cracked the whip to his outside and swiped the lead away on Lap 3, but held it only briefly as Heckenast came back at him on the bottom on Lap 5.

Sheppard climbed aboard his horse on a restart after the caution on Lap 8, throwing a slide job on Unzicker for second as they sailed through Turns 1-2. He was able to track Heckenast down in just two laps and made the move for the top spot on Lap 11.

Sheppard took command out front for the next 11 laps before facing another strong challenge from Heckenast, who took the lead again briefly on Laps 22-23. Sheppard got a better run on the top side to take the lead back, which he held all the way until the final 10 laps.

Shirley had silently been keeping pace all throughout the race behind the leaders and saw the chance to dig-in for the lead on Lap 31. He nearly threaded the Sheppard-Heckenast needle going into Turn 3, but instead was able to get Heckenast to his outside as he steered his Bob Cullen Racing #3s back to the inside to get a run on Sheppard.

Squeezing Sheppard in behind a lapped car, Shirley found some traction down low and grabbed the spot with just eight laps remaining. Sheppard tried to return the favor on the cushion, but to no avail. He got one final push on the final lap, heading way up the banking in each corner, but Shirley was just too strong down low. He crossed the line by a mere .090 seconds over Sheppard to collect his 5th Summer Nationals Feature win of 2020.

“I was just lucky the lapped cars kinda fell my way,” Shirley said in Victory Lane. “I knew where [Sheppard] was, and he was right there on my ass, so I just tried to do the best I could and was able to get the win.”

The DIRTcar Summer Nationals Late Models next take on the “Mighty” Macon Speedway Thursday night, Aug. 13, for the 100-lap Herald & Review 100. Catch all the action on DIRTVision presented by Drydene.

The JHA Motorsports team opted out of coming to Fairbury Speedway for the DIRTcar Summit Racing Equipment Modified Nationals’ most recent visit last month. This time around, they’re walking out as Feature winners.

Will Krup took the lead from Jeff Leka on Lap 17 and never looked back, scoring the $1,500 check and his third career Summit Modifieds victory at a track that's presented him challenges in the past.

“This track’s always been kinda rude to me, but to end up here in Victory Lane, that’s huge,” Krup said. “We’ve kinda had some bad luck here in the last couple weeks, but this feels good to finally put one together and actually end up in Victory Lane.”

Leka shot out to the race lead in the opening laps before receiving a big challenge down low by Krup. The lead changed hands once, then back again between the two before Krup was able to maintain his pass for the lead on Lap 17.

Using the very bottom of the track, Krup was able to hold the great speed and control and actually open up a bit of a gap in the closing laps on fellow Elite Chassis pilot Nick Hoffman and six-time Summit Modified champion Mike Harrison.

Hoffman crossed the line in second, coming all the way from his 10th-place starting spot to keep his streak going of finishes no worse than second throughout the tour. Mike Harrison rounded out the podium while Tyler Peterson and Mike McKinney capped-off the top-five.

The DIRTcar Summit Racing Equipment Modified Nationals next take on the “Mighty” Macon Speedway Thursday night, Aug. 13, as part of the Herald & Review 100 event for the DIRTcar Summer Nationals. Catch all the action on DIRTVision presented by Drydene.