TROPHY COLLECTOR: Kyle Larson Targets Big Knoxville Win At ‘The One and Only’ Silva Motorsports and Larson look to continue dominance at Knoxville Raceway Aug. 13-15 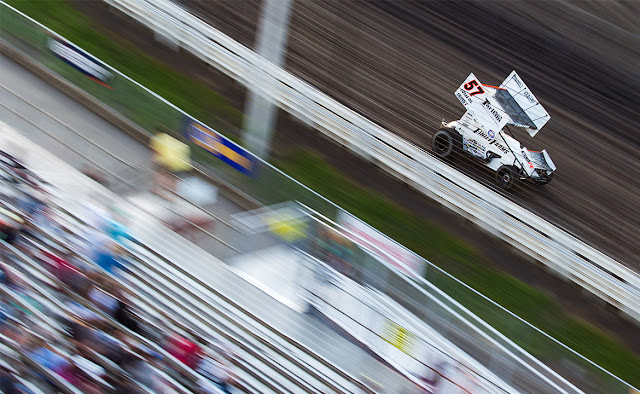 KNOXVILLE, IA – Aug. 11, 2020 – With the historic winning streak Kyle Larson has put together in 2020, some may see it as a disappointment he won’t be able to add a Knoxville Nationals title this year. Larson isn’t one of them.

To the Elk Grove, CA driver, “The One and Only” on Aug. 13-15 at Knoxville Raceway, which includes the $50,000-to-win Brownells Capitani Classic presented by Great Southern Bank on Saturday, holds just as much importance as the Nationals.

“If I won it, I would probably still consider myself a Nationals winner,” Larson said. “The format is a little different but it’s still tough, if not tougher than the regular Nationals format. You’re racing against extremely competitive cars every single night instead of splitting the field in half. In ways, it could be tougher and mean more.”

Larson has been one of the most dominate drivers at Knoxville this year, visiting Victory Lane in his last three visits to the track – including his sweep of the June World of Outlaws NOS Energy Drink Sprint Car Series doubleheader. His secret to the success? He’s not sure. You’ll have to ask his car owner and crew chief Paul Silva, he said.

However, before going on a winning streak, they struggled at Knoxville. Larson failed to qualify for the Knoxville Nationals last year and finished 10th when the Series returned to racing at the track in May. Since then, they’ve yet to lose at the “Sprint Car Capital of the World.”

The main key to their success at the track is they’ve gotten the Silva Motorsports #57 good everywhere. Larson is on a streak of 11 top-10 finishes in a row with the World of Outlaws – eight of them top two finishes and five of them wins. His most recent win came at Federated Auto Parts Raceway at I-55 where he earned his first Ironman title after a barn burner of a race.

The week prior, Larson made a rare mistake and totaled the car he had been dominating the year with. When they went to I-55 with the new car for the first time, Larson said his and Silva’s confidence was down. It caused them to second guess themselves and resulted in a sixth place run that never saw them in contention to win.

One bad night was enough. They returned to their winning ways the next day.

In total for 2020, Larson has picked up more than 30 victories between Sprint Cars and Midgets. He doesn't look too far into his historic streak, though. He's focused on doing his job each week.

“It’s been a lot of fun,” Larson said about his hot streak. “I think maybe if I ever start struggling really bad, I can look back to how successful we’ve been. Kind of the hot streak we’ve been on for the past few months now. But I just take it week to week. Really race by race because we’ve been running so much. It’s been good. Just fun to be in contention every night.”

He’ll have three more chances to add another Knoxville Raceway trophy to his ever-growing collection this weekend and more money in his wallet with Thursday and Friday’s events paying $10,000-to-win and Saturday’s paying $50,000-to-win. It’s the biggest purse of the year and biggest Sprint Car event of the year. And while it may hold the title of “The One and Only” rather than the Knoxville Nationals – due to it being postponed to 2021 – Larson isn’t concerned about titles. His plan is the same no matter what it says on the trophy. Win.

Single-day and package tickets are now available for “The One and Only” at Knoxville Raceway by clicking here.

If you can’t make it to the track, you can watch all three nights of racing live on DIRTVision.