WHAT TO WATCH FOR: ‘The One and Only’ at Knoxville Set To Be Biggest Sprint Car Event Of 2020 The three-day event will see a star-studded field of drivers compete for a massive purse 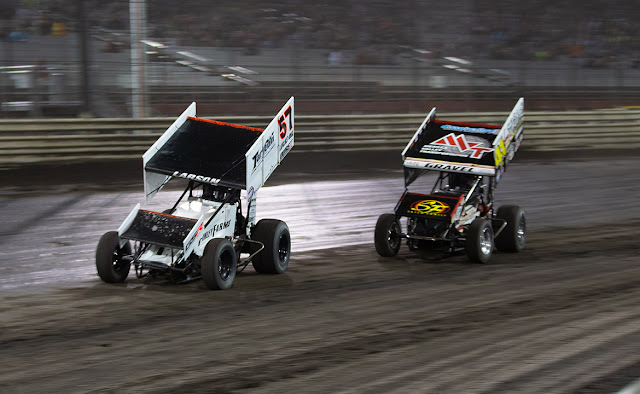 KNOXVILLE, IA – Aug. 10, 2020 – Knoxville Raceway will host the biggest Sprint Car event of the year with the World of Outlaws NOS Energy Drink Sprint Car Series this weekend on Aug. 13-15.

While it’s not the Knoxville Nationals, due to COVID-19 restrictions, “The One and Only” three-day event will still see a star-studded field of drivers compete for the largest purse of the year with a new unique format destined to thrill fans.

Significant importance has been placed on Thursday and Friday’s $10,000-to-win events, where drivers will need to accumulate points to secure a good starting spot for Saturday’s $50,000-to-win Brownells Capitani Classic presented by Great Southern Bank. “The One and Only” will be a can’t miss historic event.

Package and single-day tickets are available now by clicking here.

If you can’t make it to the races, you can watch all three nights live on DIRTVision.

DOMINATE LARSON: Kyle Larson, of Elk Grove, CA, enters “The One and Only” as a clear favorite. His last three trips to Knoxville Raceway resulted in victories – including his sweep of the World of Outlaws doubleheader in June. He also won the most recent World of Outlaws event at I-55 – his fifth Series win in 13 starts this season.

COOL UNDER PRESSURE: When the pressure is on and there’s history to be made at Knoxville Raceway, David Gravel, of Watertown, CT, has stepped up to the plate each time. He earned his first Knoxville Nationals title last year and then backed that up with a win at Knoxville in May when the World of Outlaws returned to racing for the first time after a two-month hiatus. Gravel is also the defending Capitani Classic winner.

POINTS DRIVERS: The World of Outlaws championship continues to be one of the fiercest in Series history with the top-five in points separated by only 80 points. With all three nights paying points and a unique format setting the field each night, the points standings could see a dramatic shift after the weekend.

Reigning champion and 2018 Knoxville Nationals winner Brad Sweet, of Grass Valley, CA, continues to lead the points with seven wins, so far, this season. He has five World of Outlaws wins at Knoxville and finished second at the last Series race there in June.

Ten-time Series champion and 10-time Knoxville Nationals winner Donny Schatz, of Fargo, ND, is second in points – 20 points behind Sweet. Schatz has 11 Series wins at Knoxville with the last coming in 2018. He’s currently three wins away from a career milestone of 300 Series wins.

Logan Schuchart, of Hanover, PA, is tied with Schatz in points – also 20 points back from Sweet. He’s yet to win a World of Outlaws Feature at Knoxville but had an impressive run of 22nd to second at the Knoxville Nationals last year.

Last year’s Rookie of the Year Carson Macedo, of Lemoore, CA, is fourth in points – 76 points behind Sweet. He’ll also be looking for his first Knoxville win with the Series. He’s been consistent in his sophomore, so far, finishing outside the top-10 only four times.

Sheldon Haudenschild, of Wooster, OH, is fifth in points – 80 points behind Sweet. The Stenhouse Jr.-Marshall Racing driver made big gains during the recent Ironman doubleheader, claiming his second win of the year at I-55 and then finishing second the next night. He, too, is looking for his first Series win at Knoxville.

360 NATIONALS CHAMP: Kerry Madsen, of St. Mary’s, NSW, AU, enters the week with a big Knoxville victory already. The 2005 Knoxville Raceway track champion claimed his first 360 Knoxville Nationals title last weekend. He’ll look to translate that momentum into a victory during “The One and Only" weekend.

Last year’s 360 Nationals champion James McFadden, of Warrnombool, VIC, AU, will make his long-awaited return to the Series this weekend in the Kasey Kahne Racing #9 car. He earned a podium in the car at the beginning of the year but then got stuck in Australia due to the COVID-19 pandemic.

WINLESS CHALLENGERS: Several of the top competitors coming into “The One and Only” have yet to win a World of Outlaws race at Knoxville Raceway.

Leading that group is 2013 Series champion Daryn Pittman, of Owasso, OK. He initially considered Knoxville to be a track he struggled at, but since joining Roth Motorsports last year, Pittman has been in contention to win each Knoxville event. He finished third at the Knoxville Nationals last year.

Rico Abreu, of St. Helena, CA, and two-time All Star Circuit of Champions title holder Aaron Reutzel, of Clute, TX, have both won at Knoxville Raceway this year, but are still searching for their first World of Outlaws win at the “Sprint Car Capital of the World.”

Two-time Knoxville Raceway track champion Ian Madsen, of St. Mary’s, NSW, AU, will not only be looking for his first Knoxville win with the World of Outlaws, he’ll be looking for a redeeming victory. He lost long-time ride with KCP Racing last month but has found a new home in Guy Forbrook’s #5 car. He’s finished fourth and ninth in his first two races in the car at Knoxville.

Thursday to Saturday, Aug. 13-15, at Knoxville Raceway in Knoxville, IA for The One and Only – including the Brownells Capitani Classic presented by Great Southern Bank on Saturday. Event Info / Tickets