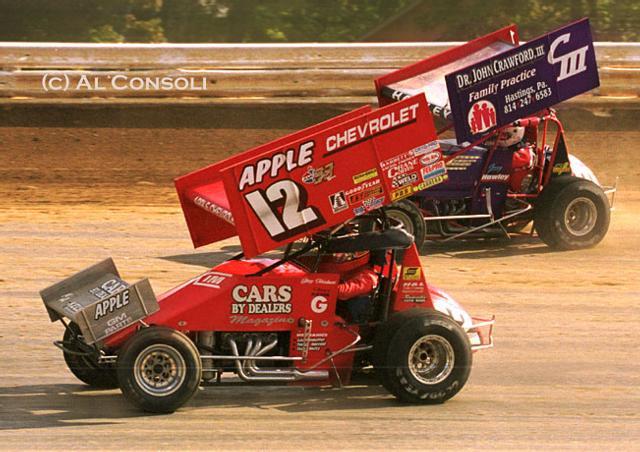 8/30/20
Mechanicsburg – Friday night’s race at Williams Grove Speedway for the 410 sprint cars will honor one of the tracks most successful sprint car owners in history, Mr. Bob Stewart of York.
Stewart fielded the famous Apple Motors Chevrolet No. 12 sprint car at the track and in the region from 1988 through 2006.
And along the way his seat hosted some of the most prolific winners the sport and area has ever had to offer.
Names like Steve Stambaugh, Fred Rahmer, Keith Kauffman, Kevin Gobrecht, Greg Hodnett and Chad Layton graced the lineup.
And before he retired from the sport after the 2006 season, Stewart’s No. 12 mount had piled up 55 total wins at Williams Grove Speedway, currently ranking him fourth on the oval all-time owner win list behind Al Hamilton, Bob Weikert and Don Kreitz Jr.
With Stambaugh at the wheel, the Apple Motorsports No. 12 garnered the 1988 track title at Williams Grove followed by the 2003 Diamond Series title with Greg Hodnett at the helm.
His cars beat the World of Outlaws, All Stars and the Division II World of Outlaws along the way at the oval.
Multiple wins came in the season opener, the Early Bird Championship turned Tommy Classic, the Jack Gunn Memorial and the Mitch Smith Memorial as well as in speedweek action and in the Summer Nationals.
Chad Layton piloted the car to its best National Open finish in 2006, riding home fifth.
The car finished third at Williams Grove against CRA in wingless action with Rahmer wheeling in 1993.
The Bob Stewart Tribute race will be 30 laps in distance with $5,012 going to the winner.
Time trials will set the heat starting grids with Fast Tees posting $300 for the driver that sets quick time.
Stewart himself will be on hand in the infield for a meet and greet with fans between 6 and 7 pm.
Former No. 12 sprint car drivers including the very first driver, Steve Stambaugh of York, will also be on hand to meet fans and celebrate Stewart’s ownership career along with Brian Leppo, Keith Kauffman and Fred Rahmer.
A live Facebook broadcast on Beer Hill Gang TV will take place from 6 – 7 pm as well.
A restored Stewart No. 12 sprint car will also be on display.
Fireworks are part of the holiday weekend program.
Adult general admission for the special show is set at $18 with youth ages 13 – 20 priced at $10. Kids ages 12 and under are always FREE at Williams Grove Speedway.
Keep up to date on all the latest speedway news and information by visiting the oval’s official website located at www.williamsgrove.com or by following the track on Twitter and Facebook.
Posted by Bill McIntyre at Monday, August 31, 2020