Williamson Wins and Charges to Runner-Up Result During Stellar Weekend 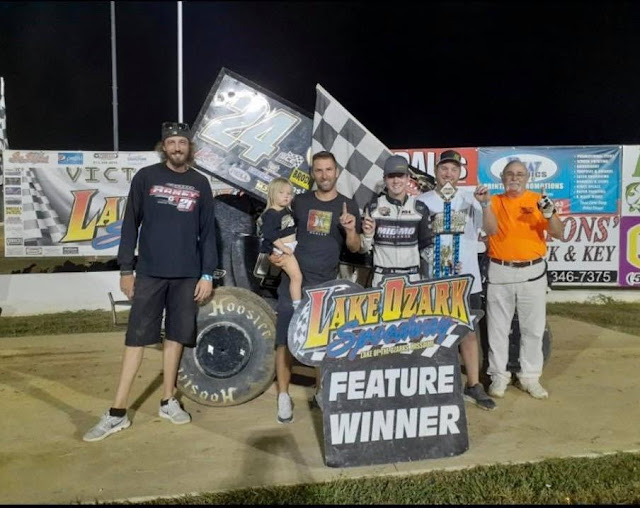 Inside Line Promotions - MOBERLY, Mo. (Aug. 26, 2020) - Garet Williamson has built plenty of confidence and he certainly has showcased speed throughout his rookie season in a sprint car.
Williamson excelled in front of the hometown crowd Saturday night at Lake Ozark Speedway in Eldon, Mo., where he collected his third win of the season. The Bryant Paver Motorsports driver followed it up the next night with a second-place finish in an ASCS Warrior Region event at Randolph County Raceway.
"We had a super-good weekend," he said. "It's huge knowing that we are fast and with the week off we haven't lost much.
"It's a huge confidence booster. It's nice to go pick up a win and follow it up with another strong run. Right now, confidence is key and we have some. So I think it's going to help a lot heading into the end of the year."
It also helps getting off to a good start. Williamson did that at Lake Ozark Speedway by charging from seventh to second place in his heat race. That performance put the 20-year-old driver on the pole in the feature. Williamson went unchallenged and dominated the event.
"I love that place," he said. "We have a lot of hometown fans who always come there, so it's nice to go there and get a win in front of them. We also have a big show there in a couple of weeks and it's nice to go there with a lot of confidence and knowing that you have a lot of speed there."
As good as Williamson was on Saturday, his trip to Randolph County Raceway might have been more impressive.
Williamson was slated to start up front in the feature after maneuvering from fifth to win a heat race, but he decided to take the $1,000 challenge of trying to win from the rear. The Missouri driver started 10th and surged into second, falling just short of the victory.
"We took that challenge and we ran second," he said. "It's nice to show we have speed and I think we had the car to win. It took rubber so it was hard to get there, but we had speed."
With the Lucas Oil ASCS National Tour not slated to race until Sept. 12, Williamson will have another off weekend coming up. His next event will be the two-day Lake Ozark Speedway 360 Nationals on Sept. 5-6.
"Obviously, we would love to race, but there is nowhere to really go," he said. "I think our next race will be a big two-day show at the Lake. So I think after the week we came off, I think we will have speed and it won't affect us much.
"I'm super excited to get back to the Lake for that race. The next race is the first time I ran in a sprint car last year so add that to it being my home track and having a win there, it's huge for us."
QUICK RESULTS -
Aug. 22 - Lake Ozark Speedway in Eldon, Mo. - Heat race: 2 (7); Feature: 1 (1).
Aug. 23 - Randolph County Raceway in Moberly, Mo. - Heat race: 1 (5); Feature: 2 (10).
SEASON STATS -
24 races, 3 wins, 6 top fives, 9 top 10s, 12 top 15s, 17 top 20s
UP NEXT -
Sept. 5-6 at Lake Ozark Speedway in Eldon, Mo., for the 11th annual Lake Ozark Speedway 360 Nationals
MEDIA LINKS -
Twitter: https://twitter.com/garetw3
Facebook: https://www.facebook.com/Garet-Williamson-Racing-572353479787934/
SPONSORS -
Williamson would like to thank Mid-Mo Equipment, Lucas Oil Products, Sorrels Auto & Truck Parts, JBC Transport, LLC, Royal Power Sports, Mo State Construction, Schure Built Suspensions, Tiger Towing, Clems Signs and Maxim for their continued support.
INSIDE LINE PROMOTIONS -
Inside Line Promotions specializes in affordable public relations and media management for motor sports drivers, teams, sponsors, tracks, series, events, organizations and manufacturers. ILP Founder Shawn Miller leverages professional journalism with new media technologies and social networking to improve your exposure and the return on investment for your sponsors.
To meet the media relations needs of your program by joining Team ILP, contact Shawn at 541-510-3663 or Shawn@InsideLinePromotions.com . For more information on Inside Line Promotions, visit http://www.InsideLinePromotions.com.
*PHOTO COURTESY OF LAKE OZARK SPEEDWAY*
Posted by Bill McIntyre at Thursday, August 27, 2020