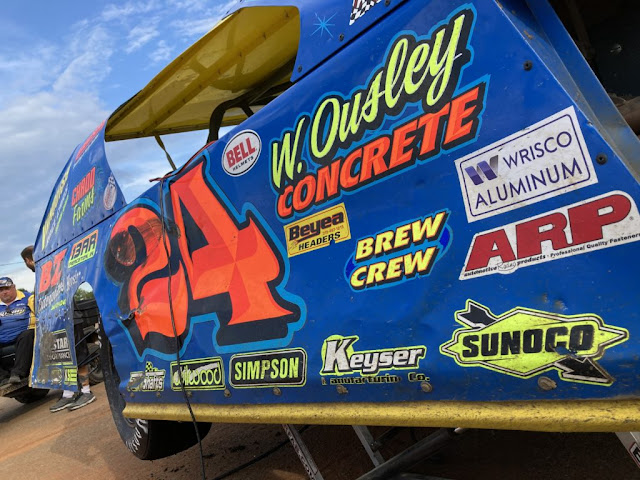 MAPLE PARK, IL – August 11, 2020 – In its nine previous seasons of existence, no one driver has ever dared to take on the DIRTcar Summit Racing Equipment Modified Nationals tour in its entirety, starting every event on the schedule from start to finish.

Just the thought of racing 28 nights over 46 calendar dates around some of the most demanding dirt tracks in the Midwestern United States is enough to deter even some of the most seasoned Modified veterans from even attempting such a task.

Meet Zeke McKenzie – the DIRTcar UMP Modified veteran and team owner from Claypool, Indiana, who’s made the commitment to start every Summit Modified race on the 2020 schedule. Should he make it all the way through the final date of competition at Cedar Ridge Speedway on Aug. 29, he’ll become the first driver in tour history to start every race in a single season.

He continues his quest against the rest of the Summit Modified field Tuesday night, Aug. 11 at Sycamore Speedway in a 25-lap, $1,500-to-win event that kicks off Phase II and Arizona Sport Shirts Week #4 of the 2020 tour. Fans can watch all the action live on DIRTVision presented by Drydene.

“We’ve ran a few shows [in the past] when it was close to home, but this year’s a little different for us,” McKenzie said. “We had a little extra help with some sponsors and everything to run the entire Summit Modifieds tour.”

McKenzie’s no stranger to Victory Lane, combining for 24 DIRTcar UMP Modified victories in local competition over the 2018 and 2019 seasons. But there was one accolade missing from his 17-year UMP Modified racing career – a DIRTcar Summit Modified win.

In the Friday night portion of the Hoosier Dirt Shootout at Kokomo Speedway, he finally got it. McKenzie drove from the fourth starting spot to lead in the opening laps of the first preliminary Showdown Feature and held off fellow UMP Modified star Tyler Nicely for his first career Summit Modified victory.

He stood in Victory Lane, astonished at his hard-fought achievement and nearly overcome with emotion.

“I’m just… flabbergasted,” McKenzie said. “It’s great to be here at home and get one in front of all these great people. We went from almost flipping at LaSalle to winning, I can’t believe it.”

A former customer of other well-known UMP Modified chassis brands, McKenzie currently owns and operates a company of his own – Vanquish Race Cars. McKenzie said the publicity surrounding the Summit Modified tour has provided him the opportunity to promote his brand on a larger scale and has been a big catalyst for his quest to start every race.

“There’s a few different things we wanted to incorporate into these cars,” McKenzie said. “They’re built bigger for the bigger and taller guys. We tried to cut the cost back a little bit to help the mid-range racer. We want to promote ourselves with the help and tech support that you should have with building chassis.”

Strikingly, the McKenzie Family Racing Team is a team of just two.

“It’s mainly me and my fiancé Ricki, she does a lot,” McKenzie said. “She’s out here sweating with me every day. We’ve had some customers and some friends that have stopped in here and there at the closer races and helped, which has been greatly appreciated.

“We’ve had multiple people offer to help or stay at their house or work out of their shop while they’re gone. What better way to spend your time traveling around than with your racing community?”

Outside of the win at Kokomo, McKenzie’s scored two other top-ten finishes. He estimated having only been to around six-to-eight tracks on the 2020 schedule, and said it’s been a challenge having to adapt to a different configuration every night, but he loves the grind and the ease of access to most tracks.

“Our luck hasn’t been real great,” McKenzie said. “We’ve been off a little bit, traveling to a lot of tracks we’ve never been to. But we found some stuff wrong with the few days off we’ve had.

“The racetracks have been great. You get here real late at night and the gates are open and you can pull in, get a nice place to sleep with some lights on, you don’t have to worry about anything.”

And while he is staring down the best UMP Modified competition in the country each and every night at the track, it doesn’t seem to scare him. Zekester welcomes the big-name challenges like Hoffman, McKinney, Harrison and Krup with open arms, and knows racing against the best, six days a week, will only help him improve.