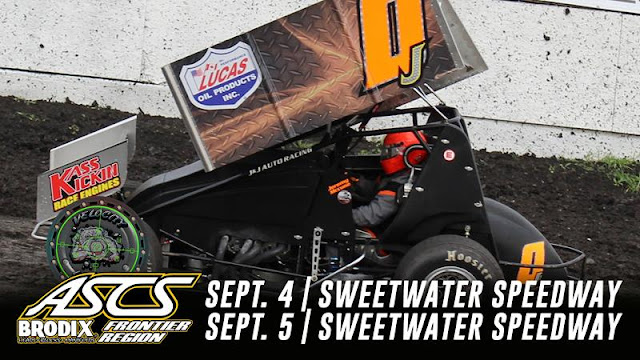 Bryan Hulbert – ROCK SPRINGS, Wy. (September 1, 2020) Down to the final two rounds of the 2020 season with the Brodix ASCS Frontier Region, the series will roll into Wyoming’s Sweetwater Speedway on Friday, September 4, and Saturday, September 5.
The season’s second trip to the Wyoming oval, the August double-header, was split between Colorado’s Nick Haygood and Oregon’s Garen Linder.
Carrying a 150-point lead into the final two rounds of competition, Jeremy McCune looks to make it back-to-back titles with the Brodix ASCS Frontier Region. With a target still firmly on his back, the person chasing that point is Jeremy’s son, Damon McCune, who is tied with Robert DeHaan for the runner-up spot. Mindy McCune and Trever Kirkland make up the top five in series standings.
Tickets are on sale at https://bit.ly/34TdeHT. Due to current health orders, seating is limited to 600 per day. Any tickets not purchased in advance will be sold at the gate.
Both nights open at 5:30 P.M. with races going green at 7:00 P.M. (MT). Along with the Brodix ASCS Frontier Region, the weekend will include IMCA Modifieds, Sport Mods, Stock Cars, Cruisers, and Go Karts.
Admission each night is $20 and $10 for Seniors and Youth 2-12. Sweetwater Speedway is located at 3320 Yellowstone Rd. in Rock Springs, Wy. Information on the track can be found online at http://www.sweetwaterspeedway.com.
For other news, notes, and information on the American Sprint Car Series, from the National Tour to any of the Regional Tours that make up ASCS Nation in 2020, log onto http://www.ascsracing.com, follow on Facebook, on Instagram, and Twitter (@LucasOilASCS).
Posted by Bill McIntyre at Wednesday, September 02, 2020