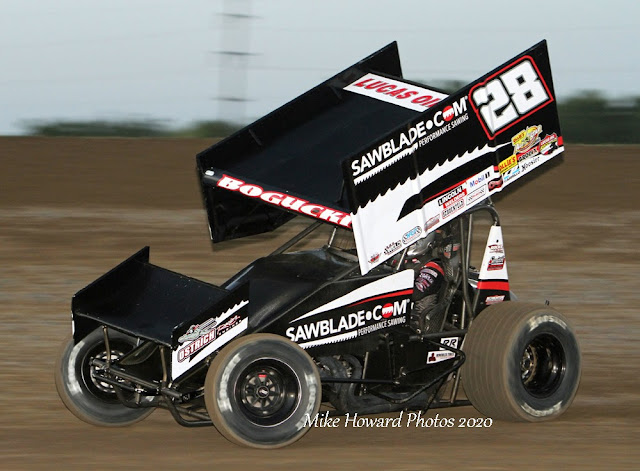 Inside Line Promotions - BRANDON, S.D. (Sept. 9, 2020) - Scott Bogucki enjoyed his debut at Huset's Speedway last weekend when the high-banked track hosted the World of Outlaws NOS Energy Drink Sprint Car Series.
"It's a cool place," he said. "The venue itself is super nice and the atmosphere was really good."
The SawBlade.com sponsored driver kicked off the two-day show on Saturday by qualifying 16th quickest out of 37 competitors. He then advanced from fourth to third place in a heat race to lock directly into the main event.
"It was pretty good," he said. "I just have to get better at qualifying. We've been qualifying reasonable, but we need to get a little better. We nearly got in the dash through the heat race. That put us straight in the show. I was disappointed the track took rubber in the feature. We had a really good race car those first few laps."
Bogucki was battling for a top 10 early before his right rear tire went flat midway through the race. He was credited with a 23rd-place outing.
The weekend wrapped up on Sunday. Bogucki timed in 14th quickest in his group and finished where he started - seventh - in a heat race. He then powered from the middle of the pack in the Last Chance Showdown to finish fifth, which was one spot shy of transferring into the main event.
"We changed the gear in it and tried a few things to qualify and it hurt us," he said. "We went the wrong way in what we were doing. It was too big of a hill to climb after that, but we had good speed in the car."
Bogucki plans to race this Friday and Saturday at I-80 Speedway in Greenwood, Neb. The weekend is capped with the Casey's General Store Midwest Fall Brawl featuring the Carpet Land Nebraska 360 Sprints and the Lucas Oil ASCS National Tour. He ranks sixth in the ASCS National Tour championship standings, but is only five points behind fifth place.
QUICK RESULTS -
Sept. 5 - Huset's Speedway in Brandon, S.D. - Qualifying: 16; Heat race: 3 (4); Feature: 23 (12).
Sept. 6 - Huset's Speedway in Brandon, S.D. - Qualifying: 14; Heat race: 7 (7); B Main: 5 (8).
SEASON STATS -
24 races, 1 win, 6 top fives, 12 top 10s, 14 top 15s, 17 top 20s
UP NEXT -
Friday and Saturday at I-80 Speedway in Greenwood, Neb., for the Casey's General Store Midwest Fall Brawl with the Carpet Land Nebraska 360 Sprints and the Lucas Oil ASCS National Tour
MEDIA LINKS -
Website: http://www.SawBlade.com
Twitter: https://twitter.com/SawBladecom
Facebook: https://www.facebook.com/SawBladecom
Instagram: https://www.instagram.com/sawblade.com_
SPONSOR SPOTLIGHT - SawBlade.com
SawBlade.com, which is located in Houston, Texas, is redefining the way industrial, hardware and home use band saw blades are made and distributed. For more information, visit http://www.SawBlade.com. Additionally, SawBlade.com is the official saw blade of the American Sprint Car Series and the title sponsor of every ASCS National Tour main event as well as the Victory Lane sponsor.
"Everyone at SawBlade.com has been very supportive," Bogucki said. "They have stuck with me for three years as we've continued to build our race team and develop into a consistent contender. I appreciate their loyalty and support."
Bogucki would also like to thank Dissolvalloy, Ostrich Race Engines, KW Motorsports, Smith Titanium, Rod End Supply, Weld Wheels, JJS Mechanical Inc., HRP Wings, Momentum Suspension, KW Transport, Pac Torsion Bars, Maxim Chassis, Weld Wheels, JJS Mechanical Inc., Momentum Suspension, Howard Law and Findley and Sons for their support.
INSIDE LINE PROMOTIONS -
Inside Line Promotions specializes in affordable public relations and media management for motor sports drivers, teams, sponsors, tracks, series, events, organizations and manufacturers. ILP Founder Shawn Miller leverages professional journalism with new media technologies and social networking to improve your exposure and the return on investment for your sponsors.
To meet the media relations needs of your program by joining Team ILP, contact Shawn at 541-510-3663 or Shawn@InsideLinePromotions.com. For more information on Inside Line Promotions, visit http://www.InsideLinePromotions.com.
*PHOTO BY MIKE HOWARD PHOTOS*
Posted by Bill McIntyre at Thursday, September 10, 2020