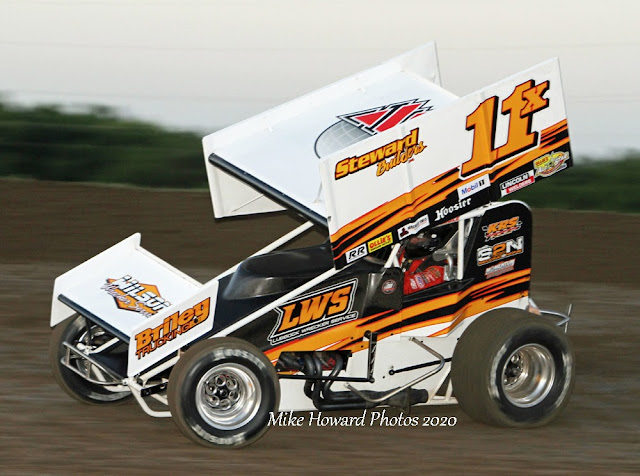 Inside Line Promotions - ELDON, Mo. (Sept. 9, 2020) - John Carney II recorded his 15th top 10 of the season in impressive fashion last Sunday evening during the 11th annual LOS 360 Nationals at Lake Ozark Speedway.
The SawBlade.com Xiphos saw blade and Burkham Contracting sponsored driver charged from 17th to seventh in the A Main to cap the ASCS Warrior Region event that featured more than 60 drivers.
"Overall I think it went pretty good," he said. "There were 60 cars in the pits and we were battling for a top 10 both nights. We didn't tear up any equipment other than on the truck. We had a right front blow out on the way up and on the way back we blew out a rear tire. That's just part of it."
Carney II, who was driving for Scott Brown, placed second in a heat race and won a qualifier on Saturday to lock into the ninth starting position for the main event.
"With as many cars that were there and with that many good cars it wasn't ideal to start on the front of the heat race because I couldn't gather up enough points to start up front in the feature," he said. "We were a little bit free in the feature. That gave us a few things to work on for Sunday."
Carney II finished 11th and was on a mission once he returned to the track for the event finale on Sunday.
"We were in really good shape early," he said. "We went from ninth to fourth in the heat race. We started fourth in the qualifier. The cushion around the top was so tall that it was kind of hard to run. Your car would get ugly. We entered four tires above the cushion. It stuck pretty good the first lap. The second lap it bucked pretty good and caved in the right side panels. A mud clod knocked the rock screen that we have to get more air to the engine through the hood and it got twisted in the throttle linkage. The throttle hung wide open around Lap 4 and then it got wrapped around it differently and it wouldn't go wide open. I thought about pulling in, but stayed out to get as many points as we could."
Carney II placed seventh, but he won a B Main to transfer into the main event.
"We experimented with stuff for the B Main and it went well," he said. "We didn't change anything for the feature. I was able to maneuver all over the race track. I would enter in turns one and two high and turn the car to run off the bottom of turn two as if I had been slid. When I'd come up to a car that was running the top or the bottom and if they made a slight mistake I could maneuver by them. That's where I made most of my moves."
His charge from 17th to seventh marked the second-most positions gained.
"It certainly feels good," Carney II said. "We passed a lot of good cars. It feels good to know we were competitive. It was a good weekend."
Carney II plans to race this Friday and Saturday at Dodge City Raceway Park in Dodge City, Kan., during the Boot Hill Showdown with the World of Outlaws NOS Energy Drink Sprint Car Series.
QUICK RESULTS -
Sept. 5 - Lake Ozark Speedway in Eldon, Mo. - Heat race: 2 (1); Qualifier: 1 (1); Feature: 11 (9).
Sept. 6 - Lake Ozark Speedway in Eldon, Mo. - Heat race: 4 (9); Qualifier: 7 (4); B Main: 1 (2); Feature: 7 (17).
SEASON STATS -
31 races, 5 wins, 9 top fives, 15 top 10s, 23 top 15s, 26 top 20s
UP NEXT -
Friday and Saturday at Dodge City Raceway Park in Dodge City, Kan., for the Boot Hill Showdown with the World of Outlaws NOS Energy Drink Sprint Car Series
MEDIA LINKS -
Website: https://j2carney.com/
Twitter: https://twitter.com/J2Carney
Facebook: https://www.facebook.com/JohnCarneyRacing/
SPONSOR SPOTLIGHT - Burkham Contracting
"David and Jeff Burkham from Burkham Contracting bought a car from me last year and we've been friends since then," Carney II said. "They wanted to be a part of the team and we're grateful for their support."
Carney would also like to thank SawBlade.com, Danny Sander Construction, Mesilla Valley Transportation, South Plains Towing, CSR Garage, Jackson Compaction, Speedway Motors Racing Engines, Momentum Racing Suspensions, Raider Graphix and Tejas Motors for their continued support.
INSIDE LINE PROMOTIONS -
Inside Line Promotions specializes in affordable public relations and media management for motor sports drivers, teams, sponsors, tracks, series, events, organizations and manufacturers. ILP Founder Shawn Miller leverages professional journalism with new media technologies and social networking to improve your exposure and the return on investment for your sponsors.
To meet the media relations needs of your program by joining Team ILP, contact Shawn at 541-510-3663 or Shawn@InsideLinePromotions.com . For more information on Inside Line Promotions, visit http://www.InsideLinePromotions.com.
*PHOTO BY MIKE HOWARD PHOTOS*
Posted by Bill McIntyre at Thursday, September 10, 2020