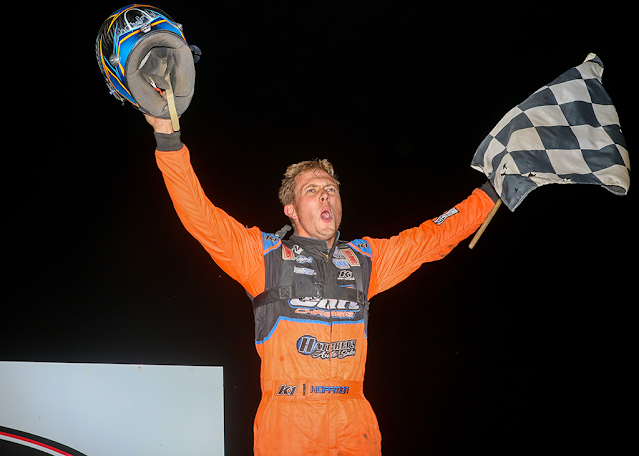 LEWISTOWN, IL – Sept. 6, 2020 – A maximum of $24,000 could be won in DIRTcar UMP Modified competition over the four major events contested in Illinois this weekend. Nick Hoffman claimed $22,500 of it.
“It’s unreal to be able to even race for that kind of money in one weekend for Modifieds,” he said.
Leading flag-to-flag in the 30th running of the Plowboy Nationals at Spoon River Speedway, Hoffman completed a Friday-Saturday-Sunday sweep with his third victory in three days at three different tracks, all while boasting yet another Elite Chassis top-four finish on Sunday.
The Mooresville, NC, chassis-builder won back-to-back Summit Racing Equipment American Modified Series shows at Farmer City Raceway and Fairbury Speedway for the first two trophies, and now his third comes in the form of $10,000 – one of those two big checks he collected this weekend.
“I think this is the biggest weekend in history for UMP Modifieds,” Hoffman said. “I don’t think we’ve ever got to race two ten-thousands back-to-back, plus $2,500 and $1,500. Labor Day weekend’s always a big weekend for Modified guys.”
Hoffman began his night by setting quick time in his group Qualifying session, winning his Heat Race, redrawing the pole and going virtually unchallenged for 50 laps around the 3/8-mile high banks for what is now his 18th triumph overall in DIRTcar-sanctioned action this year.
Hoffman did face the other leaders behind him on a few restarts and was forced to slice his way through lapped traffic at points, but nothing seemed to slow down the defending DIRTcar National points champion.
Even Hoffman’s fellow Elite Chassis drivers were taking notice of the dominance.
“It’s kinda like we’re racing an IMSA race out here, where he’s in one class and the rest of us are in another,” said Mike McKinney, lightheartedly. “We’re just kinda on the same racetrack as of right now. He’s just good everywhere you go.”
Hoffman said a big key to his success is pace management when he gets to the lead.
“When you’re able to start on the pole in a 50-lapper like this, and I can get out front and control the pace, that’s the biggest thing,” Hoffman said. “Last night, I started third and wanted to get to the lead and control that pace. When you’re running for 50 laps here, I wanted to just get to the lead and just save tires. That way, if we had a late-race caution, I could just hammer it.”
With 11 victories coming on the DIRTcar Summit Racing Equipment Modified Nationals tour in 2020, Hoffman’s winning so often now that it looks as though he’s developing a small following who now “yawn” at the sight of his next victory. But he just takes that negative energy and puts it back into his drive for victory, his product in the shop and thirst for accomplishment.
“You’ve got to take all the naysayers or haters or whatever and put them to the side and use it to motivate you, work harder and get better. I’ll go back to my job tomorrow at Elite Chassis, which, some people complain about that… but I’m living my life and I’m very fortunate to do what I do, and I love every minute of it. I’m able to drive racecars for a living and build racecars during the week. It doesn’t get much better.”
As a business owner and motorsports fabricator, Hoffman knows his customers’ successes on the track are just as important as his own. The top-four finishers Sunday night were all piloting cars built in Hoffman’s Elite Chassis shop, marking the second time in four nights they’ve swept at least the podium.
Current DIRTcar UMP Modified National points leader Mike McKinney was a part of both of those and was very pleased about his performance this weekend, scoring the victory in the Farmer City 74 preliminary Modified Feature.
“I’m happy about our entire weekend,” McKinney said. “We finished first and second at Farmer City, fifth last night at Fairbury, starting [25th of 26 cars]. Second tonight, it paid $5,000, and that’s huge for our team.”
“I think we made a statement this weekend, that we’re one of the top contenders right now, and I’m super proud of our team.”
Rounding out the podium was the third of four Elite Chassis drivers out front – Owensboro, KY’s own Tyler Nicely. The current DIRTcar American Modified Series points leader won a back-and-forth battle for position between he, Brody Pompe and David Stremme to settle into fourth with 34 laps complete. But he didn’t stop there. Three laps later, Nicely revved it up on the high side and went around Will Krup for third, which he held all the way back to the checkers.
Krup settled back into fourth as Stremme gave him a challenge at the finish line, but wasn’t enough to advance position.
While the DIRTcar UMP Modified National points battle rages on, Hoffman will soon set his sights on Morgantown, KY’s Cedar Ridge Speedway to cap-off the 2020 DIRTcar Summit Racing Equipment Modified Nationals season, Sept. 18-19, where he’ll try and tie his own single-season Feature wins record of 13. He’s at 11 right now and has all the momentum in the world to score the final two.
For all further updates on this event and future DIRTcar Racing events, follow us on Twitter @DIRTcar_Racing, like us on Facebook at @DIRTcar and follow us on Instagram @dirtcar_official.
Plowboy Nationals Feature (50 Laps) – 1. 7H-Nick Hoffman [1]; 2. 96-Mike McKinney [3]; 3. 25-Tyler Nicely [5]; 4. K19-Will Krup [6]; 5. 35-David Stremme [10]; 6. P27-Brody Pompe [8]; 7. 292-Josh Allen [9]; 8. 3L-Jeff Leka [14]; 9. 25W-Allen Weisser [16]; 10. 31-Mark Anderson [4]; 11. 32-Bobby Pierce [11]; 12. 5CS-Curt Spalding [7]; 13. A9-AJ May [25]; 14. 28M-Kevin Morrow [15]; 15. 36E-Dan Ems [19]; 16. 59R-Jacob Rexing [20]; 17. 3-Mike Brooks [26]; 18. 777-Trevor Neville [24]; 19. 77-Ray Bollinger [13]; 20. 99-Hunt Gossum [12]; 21. Z1-Zac Oedewaldt [21]; 22. 22-Josh Harris [2]; 23. 15-Chris Smith [23]; 24. 8-Kyle Steffens [17]; 25. 59B-Brent Weaver [22]; 26. 1D-Dean Hoffman [18]
Posted by Bill McIntyre at Monday, September 07, 2020