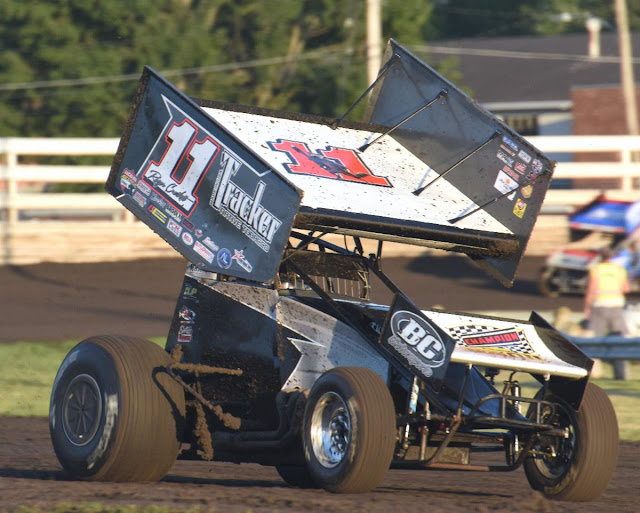 Inside Line Promotions - ELDON, Mo. (Sept. 9, 2020) - Roger Crockett was a contender as he returned to action last weekend for the first time since a violent crash approximately a month ago.
Crockett was the high-points earner on Saturday at Lake Ozark Speedway, where he charged from eighth to second place in a heat race and from sixth to third place in a qualifier. That gave him the pole position for the 11 th annual LOS 360 Nationals main event.
"We really wanted to win," he said. "We had a great heat race and a good qualifier. We started on the pole and weren't quite right for running that big of a curb. I thought the top would go away and we were just a little too tight. We ran second most of the race and lost a spot late in the race after a little contact was made. It was a good night all in all. To get a podium racing with 63 cars, we were pleased."
The third-place outing was Crockett's fifth top five of the season.
Sunday's event finale was efficient as Crockett advanced two positions to third place in a stacked heat race.
"We drew in a really bad spot," he said. "We started fifth in our heat race, but I think five of the seven cars in the main event the previous night were in the first three rows of that heat race. We were able to go fifth to third, which was a good deal. Then in the qualifier we started on the pole, but on the first lap we had a shock mount break and we lost the right front shock. The car was a handful. Ultimately it ruined the rest of our night because I didn't know what changes to make to the car."
Crockett salvaged a third-place result in the qualifier, which lined him up on the inside of the sixth row for the A Main.
"The car was pretty good at the beginning of the race," he said. "It was one of those races that didn't play out well for me. We got up to sixth on Lap 8 or Lap 9. We were way too free. I wasn't aggressive enough with the changes to the setup. If I could have swapped the car setup for the two nights I think we could have competed for the win on Saturday and been on the podium on Sunday."
Crockett scored an eighth-place finish.
He plans on resuming competition this Saturday at I-80 Speedway in Greenwood, Neb., with the Lucas Oil ASCS National Tour. He enters the event ranked second in the championship standings.
QUICK RESULTS -
Sept. 5 - Lake Ozark Speedway in Eldon, Mo. - Heat race: 2 (8); Qualifier: 3 (6); Feature: 3 (1).
Sept. 6 - Lake Ozark Speedway in Eldon, Mo. - Heat race: 3 (5); Qualifier: 3 (1); Feature: 8 (11).
SEASON STATS -
21 races, 0 wins, 5 top fives, 11 top 10s, 15 top 15s, 17 top 20s
UP NEXT -
Saturday at I-80 Speedway in Greenwood, Neb., with the Lucas Oil ASCS National Tour
MEDIA LINKS -
Twitter: https://twitter.com/the_Rocket_11
Facebook: https://www.facebook.com/roger.crockett.11/
Instagram: https://www.instagram.com/therocket11/
SPONSOR SPOTLIGHT - Factory Kahne
Factory Kahne Shocks was founded in 2009 and has developed into one of the leading shock companies in short track racing. For more information, visit https://www.facebook.com/factorykahne/ .
"Since we've switched to running Factory Kahne shocks the consistency has been much better for us and we've been very happy with the products," Crockett said.
Crockett would also like to thank BC Motorsports, Rocket Designs, Tracker Native Tobacco, FK Rod Ends, Olson Custom Designs, Champion Racing Oil, Maxim Chassis, Indy Race Parts, Bell Helmets, AL Driveline, Newlin Bar Service, Rider Racing Engines and KSE Racing Products for their continued support.
INSIDE LINE PROMOTIONS -
Inside Line Promotions specializes in affordable public relations and media management for motor sports drivers, teams, sponsors, tracks, series, events, organizations and manufacturers. ILP Founder Shawn Miller leverages professional journalism with new media technologies and social networking to improve your exposure and the return on investment for your sponsors.
To meet the media relations needs of your program by joining Team ILP, contact Shawn at 541-510-3663 or Shawn@InsideLinePromotions.com . For more information on Inside Line Promotions, visit http://www.InsideLinePromotions.com.
*PHOTO BY PAUL ARCH*
Posted by Bill McIntyre at Thursday, September 10, 2020