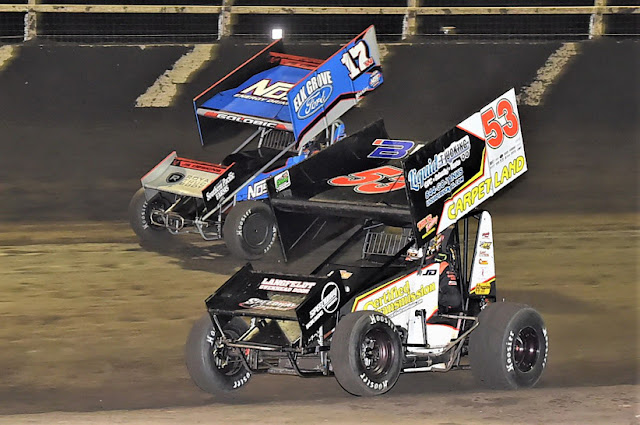 Inside Line Promotions - BRANDON, S.D. (Sept. 23, 2020) - Jack Dover recorded a pair of podium finishes last weekend during the DeKalb/Asgrow Power Series Nationals presented by Casey's General Stores.
Dover finished second on Friday and third on Saturday out of a field of 45-plus drivers competing in the Midwest Sprint Touring Series and the Midwest Power Series doubleheader at Huset's Speedway. That gives Dover a podium in all four races at the track this year.
"With the caliber of drivers and how many cars there we were more than pleased with how the whole weekend went," he said. "It seemed like both nights we were in the top three quickest in hot laps. We went out early both nights for time trials, which I think hurt us because the track got better."
The weekend began on Friday with Dover qualifying seventh quickest in his group. He won a heat race from the pole position to advance into the feature redraw. Dover drew the No. 5 to line up on the inside of the third row for the main event.
"I got up to third and rode around for a bit," he said. "We were able to slide Lynton Jeffrey for second. As the rubber came in it seemed like our car got better. On the last lap I diamond the corner in turns one and two and had a good run down the back straightaway. I got right beside Shane Golobic in turn three. I was a little too high on the track and got out of the rubber. He was able to get the win. If I was to do it again, it's so hard because you're going so fast and thinking about a lot all at once, but maybe I could have pulled down to try to chop into that lane. But overall it was a pretty good race."
Dover returned to the high-banked oval on Saturday, qualifying ninth quickest in his group and advancing from fifth to third place in a heat race. That gave him the ninth starting position for the A Main.
"We pushed off for the main event and I realized my car was down a cylinder," he said. "I don't know why and can't find anything wrong with it. I'm not sure if it was an MSD box or the ignition went bad. We ran that whole race on seven cylinders. I worked my way up there slowly. With about 12 laps to go we got up to fourth. There was a late restart and Justin Henderson got tight in turn two. I was able to slide him in turns three and four. He slid me really hard in turns one and two, but I turned underneath him and we ended up third. If we were running on all eight cylinders I think we might have had something for those guys up front."
Dover's third-place outing was his 18th top five of the season. He ended the Midwest Power Series season ranked third in the championship standings despite missing races.
Dover plans on returning to action this Saturday at Rapid Speedway in Rock Rapids, S.D., with the Midwest Sprint Touring Series. It is the season finale for the series. Dover is tied for sixth in the championship standings despite missing multiple races. He leads the series with seven wins.
QUICK RESULTS -
Sept. 18 - Huset's Speedway in Brandon, S.D. - Qualifying: 7; Heat race: 1 (1); Feature: 2 (5).
Sept. 19 - Huset's Speedway in Brandon, S.D. - Qualifying: 9; Heat race: 3 (5); Feature: 3 (9).
SEASON STATS -
26 races, 8 wins, 18 top fives, 21 top 10s, 22 top 15s, 22 top 20s
UP NEXT -
Saturday at Rapid Speedway in Rock Rapids, S.D., with the Midwest Sprint Touring Series
MEDIA LINKS -
Website: http://www.JackDoverRacing.com
Twitter: https://twitter.com/JackDoverRacing
Facebook: https://www.facebook.com/jackdoverracing?fref=ts
SPONSOR SPOTLIGHT - Thorpe's Body Shop
Thorpe's Body Shop has been offering collision repair and automobile painting services to customers in Papillion, Neb., and the surrounding areas for more than 40 years. For more information, visit http://ThorpesBodyShop.com.
"I want to thank Thorpe's Body Shop for making our cars look sharp every year," Dover said. "Blake, who co-owns it, has been a family friend since I can remember and we really appreciate his support of our race team throughout the years."
Dover would also like to thank Liquid Trucking, Carpet Land, Certified Transmission, SSS Motorsports, Backlund Plumbing, Husker Diesel, True Trucking, Speedway Graphics, Speedway Engines, Volvo Trucks of Omaha, Spike Chassis, Sway Away, ButlerBuilt Professional Seat Systems, Keizer Aluminum Wheels, Schoenfeld Headers, Langfeldt Overhead Doors, K&N Filters, FK Rod Ends, DMI, Vortex Wings, Speedway Motors, Ostransky Farms, R&G Services and Industrial Plating for their continued support.
INSIDE LINE PROMOTIONS -
Inside Line Promotions specializes in affordable public relations and media management for motor sports drivers, teams, sponsors, tracks, series, events, organizations and manufacturers. ILP Founder Shawn Miller leverages professional journalism with new media technologies and social networking to improve your exposure and the return on investment for your sponsors.
To meet the media relations needs of your program by joining Team ILP, contact Shawn at 541-510-3663 or Shawn@InsideLinePromotions.com . For more information on Inside Line Promotions, visit http://www.InsideLinePromotions.com.
*PHOTO BY ROB KOCAK PHOTOS*
Posted by Bill McIntyre at Thursday, September 24, 2020