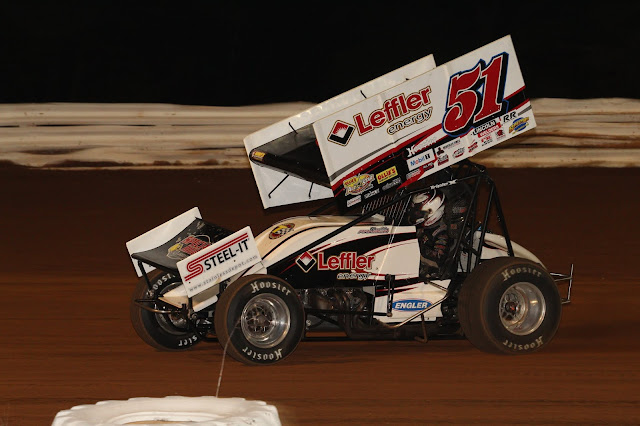 Mechanicsburg – Freddie Rahmer won his third sprint car feature of the season at Williams Grove Speedway on Friday night in the National Open Tune Up race and in doing so the Salfordville speedster expanded his lead in the season-long point standings with just two races to go in the season.
In the 358 sprint main, Derek Locke of Carlisle drove by point challenger Kevin Nouse to score the win and the track title in the division. The victory was also his third of the season at the track.
The 25-lap 410 sprint car main would go non-stop with Rahmer leading flag to flag.
On the opening lap with Rahmer at the helm, TJ Stutts, Anthony Macri and Robbie Kendall raced three-wide through the second corner for the second spot with Kendall coming away with the position.
Kendall would then chase Rahmer as he drew up on the rear of the field and by lap nine the leaders had traffic running directly in front of them.
The high line was the lane of choice on this night and Rahmer refused to drop off of the cushion to get around traffic.
This allowed the front four of Rahmer, Kendall, Macri and Stutts to bunch up and pull within half a straight away of each other while all the pilots waited for someone to pull the trigger and drop to the bottom lane.
Rahmer finally put himself into traffic on the 12th tour, bulling his way into the back of the pack and it was then that Kendall made his first bid for control although Rahmer was up to the task.
With 11 laps to go Rahmer made contact with the backmarker of Tim Glatfelter at the flagstand as he raced to stay at the front.
Moments later Lance Dewease slowed and pulled pitside while racing inside the top ten after also dropping out of the dash earlier in the night.
Kendall took a second stab at the lead, more contentious this time on the 17th tour when he dipped under Rahmer in the third and fourth turns only to come up short as Rahmer continued to refuse to forsake his cushion line around the oval.
After that Rahmer began to snake his way through the field and get away from Kendall as Anthony Macri and Brent Marks made moved in to overtake him.
In the end Rahmer took the win by 1.104 seconds over Macri, Marks, Kendall and Brian Montieth.
Sixth through 10th went to Stutts, Brian Brown, Matt Campbell, Danny Dietrich and Kyle Reinhardt.
With three laps to go, Stutts nearly spun on the turn two cushion but recovered while Danny Dietrich did spin to avoid direct contact before continuing on. At the time, both drivers were vying for a top-five finish.
Heats went to Rahmer, Dewease and Macri with Jeff Halligan scoring the consolation and Rahmer winning the dash to earn the pole for the main event.
Stutts set fast time with a lap of 16.629 seconds.
Kevin Nouse took the lead at the start of the 358 sprint main with the track title awaiting at the end of the 20-lap distance.
Derek Locke started the race in third and watched as Nouse took the lead when action began.
The red flag appeared with two laps recorded for a six-car pile up in the second turn.
When action resumed Locke lined up second and immediately went to work on Nouse for the lead.
He worked either side of the speedway with smooth precision to draw even with Nouse more than once before finally driving by with an outside move in the second turn on lap six.
Once at the front, Locke drove away to the third oval win of his career and of the season while also wrapping up the 2020 track title over Nouse.
Nouse was second in the race followed by Brett Wanner, Steve Owings and Alyson Dietz.
Heats went to Dietz, Nouse and Locke with the last chance race going to Scott Fisher.
Feature Finishes
410 sprints, 25 laps: 1. Freddie Rahmer, 2. Anthony Macri, 3. Brent Marks, 4. Robbie Kendall, 5. Brian Montieth, 6. TJ Stutts, 7. Brian Brown, 8. Matt Campbell, 9. Danny Dietrich, 10. Kyle Reinhardt, 11, Dylan Cisney, 12. Logan Wagner, 13. Lucas Wolfe, 14. Chad Trout, 15. Landon Myers, 16. Troy Wagaman, 17. Justin Peck, 18. Steve Buckwalter, 19. Jeff Halligan, 20. Doug Hammaker, 21. Tim Glatfelter, 22. Kyle Moody, 23. Lance Dewease, 24. Mark Smith
DNQ: Troy Fraker, Nicole Bower, Brett Michalski, Adrian Shaffer, Brent Shearer
358 sprints, 20 laps: 1. Derek Locke, 2. Kevin Nouse, 3. Brett Wanner, 4. Steve Owings, 5. Alyson Dietz, 6. Chad Criswell, 7. Chris Arnold, 8. Steve Wilbur, 9. Dylan Norris, 10. Zach Newlin, 11. Tyler Brehm, 12. Scott Fisher, 13. Matt Findley, 14. Wyatt Hinkle, 15. Cody Fletcher, 16. Jordan Givler, 17. Chris Frank, 18. Justin Foster, 19. Russell Hammaker, 20. Mark Van Vorst, 21. Hannah Riser, 22. Ashley Capetta, 23. Dylan Orwig, 24. Steve Kissmaore
DNQ: Billy Heltzel, Tyler Templin, Brett Rose
Posted by Bill McIntyre at Saturday, September 26, 2020