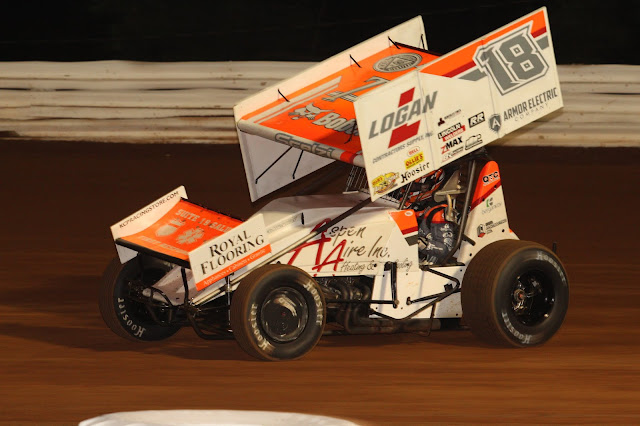 PETERSEN MEDIA- Another busy week in Pennsylvania for Gio Scelzi was highlighted by a second place run with the All Stars at Williams Grove on Friday night, as well as a Thursday night third place finish at BAPS Motor Speedway.
“It was a really solid week for us out in PA,” Gio Scelzi said. “We had a chance to really take some big swings at our car, and we continued to make gains which is huge for us as we continue to gel.”
The busy stretch kicked off on Wednesday night at Lincoln Speedway where Scelzi would pick up a 10th place finish in the feature event aboard the Logan Contractors Supply, Inc./Aspen Aire/Royal Flooring backed No. 18 machine.
Thursday night the scene shifted to BAPS Motor Speedway where the Fresno, CA driver would have a very strong night that saw him kick things off by timing in third fastest in time trials.
Running second in his heat, Scelzi would find himself on the outside of the second row to start the feature event on a surface that was extremely slick.
Continuing to try and get dialed in on slick surfaces, Scelzi and the Tyler Swank led crew would make some big changes to their car before the feature event and they would pay dividends. Working inside the Top-Three during the duration of the feature, Scelzi would cap his night with a third place run as the team readied for two nights of action with the All Star Circuit of Champions.
Checking in at Williams Grove Speedway, a venue he won at a year ago, Scelzi got off to a strong start as he timed in fastest in his qualifying flight, and fastest overall.
Running fourth in his heat race, Scelzi would advance into one of the twin dashes based on his qualifying time, and by way of the win in Dash No. 2, he would start on the front row of the feature event.
On another slick surface, Scelzi would get off to a great start as he would get the early jump in the feature event. Pacing the field over the likes of Aaron Reutzel and Kyle Larson.
With a little rubber starting to go down on the speedway, Scelzi would be at a bit of a disadvantage as the leader. With Aaron Reutzel getting to it first, he would overtake Scelzi for the race lead on the 14th lap.
Settling into second, Scelzi would hang on to the position as he would fend off Larson and land on the podium with the All Stars by way of a runner up finish.
Returning to Lincoln Speedway on Saturday night for the Dirt Classic, Scelzi would continue to flex his muscle and show speed as he timed in third quickest in his time trials flight.
Running the unique Dirt Classic format, the youngster would win his first heat before finishing seventh in his second heat. Once points were tabulated, he would find himself safely in the feature event as he took the green flag from the sixth starting position.
The feature event did not quite go how Scelzi and company had hoped to cap off the busy week of racing, but he was still able to battle inside the Top-10 during much of the 40-lap affair. Slipping back to 11th in the closing laps, Scelzi would finish there to finish the week off.
“Saturday night we missed it a little, but I am still really happy with how the week went and how much we learned as a team,” Scelzi said. “I am really confident heading into Eldora Speedway, and Plymouth Speedway this week.”
KCP Racing would like to thank Logan Contractors Supply Inc., Aspen Aire, Royal Flooring, Bobcat, Ted’s Body Shop, Team Excavating, Cox Design and Fabrication, Armor Electric Company, TammyHeckart.com, Quality Traffic Control, BergenKDV, and BK Racing Titanium for their support this season.
BY THE NUMBERS: Starts-19, Wins-0, Top-5’s- 8, Top 10’s-9
ON TAP: Scelzi and KCP Racing will take part in Tuesday and Wednesday’s Governors Reign at Eldora Speedway before battling with the World of Outlaws on Thursday night at Plymouth Speedway.
STAY CONNECTED: You can also visit the team’s website at www.kcpracing.com, and follow the team on Twitter @KCPRacing.
Posted by Bill McIntyre at Tuesday, September 22, 2020