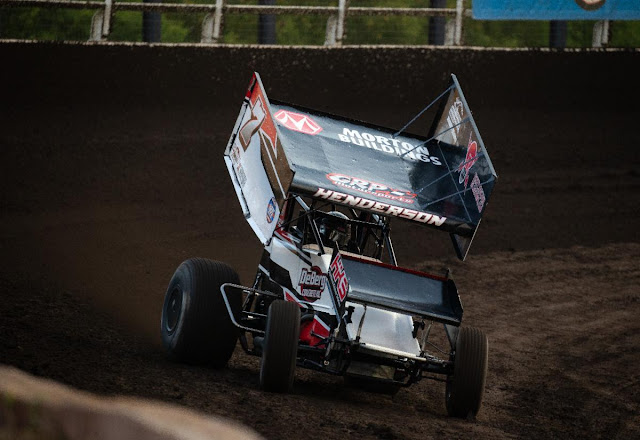 Inside Line Promotions - NEW RICHMOND, Wis. (Sept. 16, 2020) - A late-race accident marred a chance at victory for Justin Henderson in the Mike Sandvig Racing No. 7 during the 19th annual Jerry Richert Memorial at Cedar Lake Speedway last Saturday.
It marked the second consecutive season misfortune hampered the team during the Bumper to Bumper IRA Outlaw Sprint Series event.
Henderson did manage to grab his second career win in the 360ci sprint car portion of the event earlier in the night aboard his own car. However, it was the sting of letting a potential clean sweep slip away that was still on his mind at the end of the night.
"We would've been the first one in the history of the event to win both races in one night and it's disappointing not to see that play out," he said. "It had the potential to be a very big night for our program, but I guess luck had other plans. It just goes to show that one minute you're on top of the world and the next you're at the bottom of the mountain."
Henderson began the night by timing in quickest overall among 25 cars in attendance with a lap of 11.892 seconds. He followed that up by winning a heat race from the fourth starting position and earning a spot into a dash.
A second-place finish in the dash lined Henderson up on the inside of the second row for the feature. He dropped to fourth on the opening lap. Using the low side of the track, Henderson crept back into third and he settled into the runner-up spot before the halfway mark.
With less than 10 laps remaining, Henderson was in heavy pursuit of the leader in traffic when he got all four wheels over the cushion in a turn and flipped. He was credited with a 23rd-place finish.
"We were pretty fast at both ends of the track and had a car capable of winning from the moment we unloaded," he said. "I could really run all over the track and the car was so good no matter where I put it. Every time it seemed the leader was going to get away from us, we'd reel them right back in and it just sucks knowing how good we were."
After looking things over, the team found that the wreck was the result of a cracked spindle.
"I was kind of scratching my head trying to figure out what happened as I hit that same mark on the track all night and not once did I get it up over the cushion like that," he said. "But last week when we hit the wall something kind of felt off and I think it was kind of a precursor for what happened out there. It's just unfortunate it cost us a chance at history, but thankfully all my safety equipment held up and we can try again next time."
QUICK RESULTS -
Sept. 12 - Cedar Lake Speedway in New Richmond, Wis. - Qualifying: 1; Heat race: 1 (4); Dash: 2 (5); Feature: 23 (3).
SEASON STATS -
23 races, 1 win, 2 top fives, 6 top 10s, 13 top 15s, 16 top 20s
UP NEXT -
TBD
MEDIA LINKS -
Twitter: https://twitter.com/Henderson_racin
Facebook: https://www.facebook.com/groups/90850346221/
SPONSOR SPOTLIGHT - Rider Racing Engines
Rider Racing Engines has been building high performance engines in Central Pennsylvania for more than 20 years. No matter whether you're racing a street stock or a World of Outlaws Sprint car, Rider Racing Engines can put you in Victory Lane. For more information, visit http://www.riderracingengines.com .
"That engine we were using during the Richert Memorial was a Rider that had about 21 races on it and it still runs as good as the day we first put it in," Henderson said. "Rider provides quality equipment that is built to last and I'd recommend them to anyone in racing."
Sandvig would also like to thank Morton Buildings, Eszlinger Electric, DeBerg Flooring, R2 Enterprise, DeBerg Concrete, Winters Performance, Schoenfeld Headers, BK Racing TI Components, Triple X Race Co., Wings Unlimited, Keizer Aluminum Wheels, SBS FK Shocks, Hinchman Racewear, Heartland Kitchen Solutions and Simpson Race Products for their continued support.
INSIDE LINE PROMOTIONS -
Inside Line Promotions specializes in affordable public relations and media management for motor sports drivers, teams, sponsors, tracks, series, events, organizations, and manufacturers. ILP Founder Shawn Miller leverages professional journalism with new media technologies and social networking to improve your exposure and the return on investment for your sponsors.
To meet the media relations needs of your program by joining Team ILP, contact Shawn at 541-510-3663 or Shawn@InsideLinePromotions.com . For more information on Inside Line Promotions, visit http://www.InsideLinePromotions.com.
*PHOTO BY TRENT GOWER PHOTOGRAPHY*
Posted by Bill McIntyre at Thursday, September 17, 2020