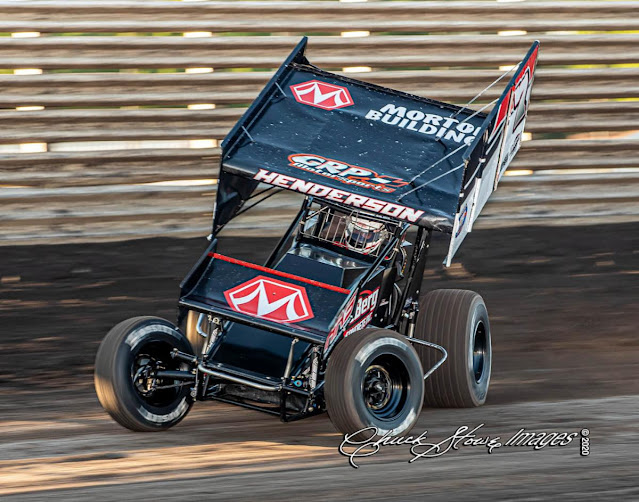 Inside Line Promotions - BRANDON, S.D. (Sept. 9, 2020) - Justin Henderson guided the Mike Sandvig Racing No. 7 to two feature starts with the World of Outlaws NOS Energy Drink Sprint Car Series last weekend at Huset's Speedway.
Henderson finished 19th on Saturday night and rebounded on Sunday to set quick time in his time trial flight before finishing 13 th in the A Main. The top-15 outing was the 13th of the season for the duo.
"We showed speed all weekend against the best in the world," Henderson said. "With how we ran, I see no reason we can't be contending at any race we choose to go to for the rest of the year."
Henderson kicked off the action Saturday night by timing in 20th quickest among 37 cars in attendance with a lap of 11.037 seconds. He then finished where he started - fifth - in a heat race to lock himself into the feature in the 20th starting spot.
Henderson advanced as high as 15th during the feature, but with the track taking rubber and with a rash of blown tires affecting the entire field, Henderson eased the car home with a 19th-place finish.
"If we would've put ourselves in a better position we may have been able to finish better," he said. "But once the rubber took nobody was going anywhere and track position killed us."
Henderson returned to the bullring on Sunday and showed speed immediately as he set quick time in his time trial flight with a lap of 10.843 seconds. He started on the pole in a heat race, but a tough start shuffled him back and he blew a tire trying to make ground up. Henderson rejoined the field at the rear and charged forward to finish fifth to secure the 17 th starting spot in the A Main.
Henderson got shuffled back on the initial start of the feature, but over the next 20 laps he steadily worked himself inside the top 10. He was battling for seventh before a late restart cost him some ground and he took the checkered flag in 13th.
"We missed an opportunity to get in the dash out of the heat and I had to drive pretty hard to try and get back in there and it cost us," he said. "In the feature we were battling pretty hard with Brad Sweet and he kind of took my momentum away. After that I was having trouble hitting my marks and it just seems the car kind of went away."
Next on the schedule will be a Bumper to Bumper IRA 410 Outlaw Sprint Series show at Cedar Lake Speedway in New Richmond, Wis., this Saturday during the 19th annual Jerry Richert Memorial. Henderson will also be running his 360 sprint car that night throughout the 360 portion of the event.
Henderson is a past winner of the 410 event in 2005 and last year he led 26 laps before getting caught up in a late-race incident. He's also got a win in 2015 during the 360 portion of the event.
"I feel really good about our program heading into Cedar Lake as we were really good there last year and I think our program is better this year," he said. "There is some good money on the line and somebody has to win it, so it might as well be us."
QUICK RESULTS -
Sept. 5 - Huset's Speedway in Brandon, S.D. - Qualifying: 20; Heat race: 5 (5); Feature: 19 (20).
Sept. 6 - Huset's Speedway in Brandon, S.D. - Qualifying: 1; Heat race: 5 (1); Feature: 13 (17).
SEASON STATS -
22 races, 1 win, 2 top fives, 6 top 10s, 13 top 15s, 16 top 20s
UP NEXT -
Saturday at Cedar Lake Speedway in New Richmond, Wis., for the 19 th annual Jerry Richert Memorial with the Bumper to Bumper IRA 410 Outlaw Sprint Series
MEDIA LINKS -
Twitter: https://twitter.com/Henderson_racin
Facebook: https://www.facebook.com/groups/90850346221/
SPONSOR SPOTLIGHT - GRP Motorsports
GRP Motorsports, owned and managed by sprint car racing super fan Greg Parent, supports cars, drivers and racing events throughout the Midwest.
"Greg has been a longtime supporter of mine in my own deal for years and he's coming on board to help with Mike's deal for 2020," Henderson said. "He's done a lot for the sport and my career and that will make it even more special when Mike and I get that first win having him along for the ride."
Sandvig would also like to thank Morton Buildings, Eszlinger Electric, Deberg Concrete, DeBerg Flooring, R2 Enterprise, Rider Racing Engines, Winters Performance, Schoenfeld Headers, BK Racing TI Components, Triple X Race Co., Wings Unlimited, Keizer Aluminum Wheels, SBS FK Shocks, Hinchman Racewear, Heartland Kitchen Solutions, Blud Lubricants, Boji Custom Metal Works and Simpson Race Products for their continued support.
INSIDE LINE PROMOTIONS -
Inside Line Promotions specializes in affordable public relations and media management for motor sports drivers, teams, sponsors, tracks, series, events, organizations, and manufacturers. ILP Founder Shawn Miller leverages professional journalism with new media technologies and social networking to improve your exposure and the return on investment for your sponsors.
To meet the media relations needs of your program by joining Team ILP, contact Shawn at 541-510-3663 or Shawn@InsideLinePromotions.com . For more information on Inside Line Promotions, visit http://www.InsideLinePromotions.com.
*PHOTO BY CHUCK STOWE IMAGES*
Posted by Bill McIntyre at Thursday, September 10, 2020