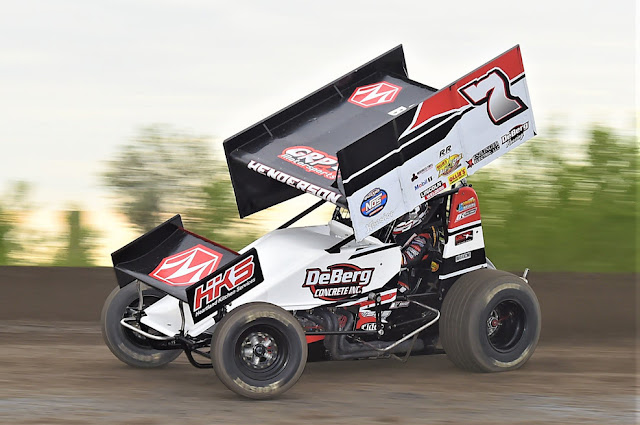 Inside Line Promotions - GREENWOOD, Neb. (Sept. 1, 2020) - Justin Henderson was dealt a strong dose of heartbreak when a Jacob's Ladder broke on the opening circuit of the World of Outlaws NOS Energy Drink Sprint Car Series feature at I-80 Speedway Sunday night.
It relegated him to a 22nd-place finish and ruined what appeared to be a promising night that saw the Tea, S.D., native line up on the inside of the second row for the feature.
"It's hard to guarantee too much with the level of competition we were against, but I feel like we had a car capable of finishing up front," Henderson said. "It was just kind of a freak incident, but otherwise there's a lot to feel good about with the speed we had."
Henderson timed in 15th quickest among 35 drivers in attendance with a lap of 14.632 seconds. He then advanced forward two positions in a heat race to finish second and earn a spot in the dash. Henderson drew the No. 2 for the dash and finished third, securing himself the third starting spot in the A Main.
"We qualified decent and kept ourselves in position early in the night to get into the dash and that's the name of the game with the Outlaws," he said. "It's been a struggle for us all year in capitalizing on opportunities so it was nice to be on the other side of the coin for once."
At the drop of the green flag, Henderson jumped to the top of the track in an attempt to secure the third position. Unfortunately, he got into the outside guardrail. Henderson said he could tell something was wrong, but with the field getting strung out he regained his composure and settled into the sixth position by the first caution.
When the field returned to green flag action, the car was increasing hard to hold onto and Henderson found himself slipping backwards after restarts. As a result, he pulled off the track with a handful of laps remaining and was credited with finishing 22nd.
"I tagged the wall on the start and I wasn't sure what was wrong, but I knew it was something," he said. "When the field got spread out, we were actually all right, and I thought if we could go caution free, we'd be ok. Unfortunately, it didn't play out that way and we were just dead in the water with every restart."
Henderson and Sandvig will join the World of Outlaws for two nights of racing at Huset's Speedway in Brandon, S.D., this Saturday and Sunday.
The team competed at Huset's Speedway in early August during the Grand Re-Opening with the Ollie's Bargain Outlet All Stars Circuit of Champions and brought home a 15th-place finish. Henderson enjoyed the way the track was reconfigured and he is looking forward to bettering his results this weekend.
"One of the first things they did when they reopened was improve the banking of the track and as a driver it made it so much fun to race on," he said. "I'm looking forward to taking another crack at the place and I believe we're in store for a good weekend of racing."
QUICK RESULTS -
Aug. 30 - I-80 Speedway in Greenwood, Neb. - Qualifying: 15; Heat race: 2 (4); Dash: 3 (2); Feature: 22 (3).
SEASON STATS -
20 races, 1 win, 2 top fives, 6 top 10s, 12 top 15s, 14 top 20s
UP NEXT -
Saturday and Sunday at Huset's Speedway in Brandon, S.D., with the World of Outlaws NOS Energy Drink Sprint Car Series
MEDIA LINKS -
Twitter: https://twitter.com/Henderson_racin
Facebook: https://www.facebook.com/groups/90850346221/
SPONSOR SPOTLIGHT - Heartland Kitchen Solutions
Heartland Kitchen Solutions is a Pepperidge Farm route that services the Des Moines, Iowa, area large and small stores. Owned by race fan Curt Plough, who is a retired U.S Army First Sergeant, the business provides exceptional cookies, crackers, breads and more that carry a 75-year tradition of feeding families.
"Mike and Justin are kind of a low budget team and I always enjoy being a part of the underdog mentality," Plough said. "They kind of remind me of myself and I'm happy to help take them over the hump with our support."
Sandvig would also like to thank Morton Buildings, Eszlinger Electric, Deberg Concrete, DeBerg Flooring, R2 Enterprise, GRP Motorsports, Winters Performance, Schoenfeld Headers, BK Racing TI Components, SBS FK Shocks, Wings Unlimited, Keizer Aluminum Wheels, Rider Racing Engines, Hinchman Racewear, Blud Lubricants, Triple X Race Co., Boji Custom Metal Works and Simpson Race Products for their continued support.
INSIDE LINE PROMOTIONS -
Inside Line Promotions specializes in affordable public relations and media management for motor sports drivers, teams, sponsors, tracks, series, events, organizations, and manufacturers. ILP Founder Shawn Miller leverages professional journalism with new media technologies and social networking to improve your exposure and the return on investment for your sponsors.
To meet the media relations needs of your program by joining Team ILP, contact Shawn at 541-510-3663 or Shawn@InsideLinePromotions.com . For more information on Inside Line Promotions, visit http://www.InsideLinePromotions.com.
*PHOTO BY ROB KOCAK PHOTOS*
Posted by Bill McIntyre at Wednesday, September 02, 2020