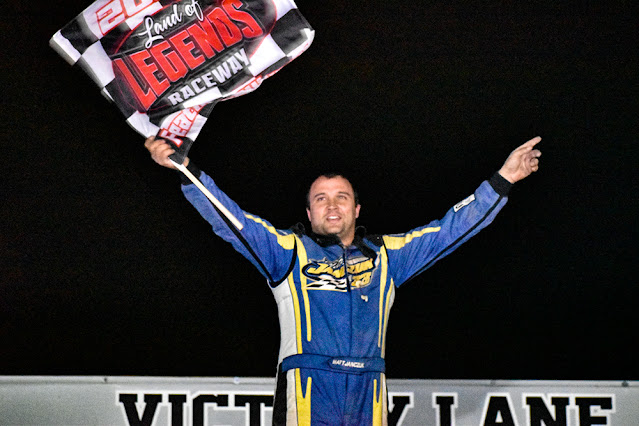 Matt Janczuk, Brett Senek, and Zach Sobotka top podium at DIRTcar Sportsman Modified Series: Central Region finale; Janczuk declared Central Region champ
CANANDAIGUA, NY - Over 50 DIRTcar Sportsman Modified Series drivers unloaded at Land of Legends Raceway for the final DIRTcar Sportsman Modified Series: Central Region event of 2020. For many drivers, this was the final look at the Canandaigua, NY half-mile speedway before the Series returns on Saturday, October 10 for DIRTcar OktoberFAST presented by DIRTVision.
With a mere 20 points separating the top five in points, it was anyone’s guess as to who would come out on top. To decide it, 30 cars stomped on their Chevy Performance crate engine accelerators at the green flag and never stopped until the checkered flag fell after 30 laps of hardscrabble, high-intensity DIRTcar Racing.
At the end of 30 laps, the top three were Matt Janczuk, Brett Senek, and Zach Sobotka. Before this year these drivers did not have ten starts at Land of Legends Raceway between the three of them.
Janczuk took the green flag, held on to the lead, and never looked back to become 2020’s DIRTcar Sportsman Modified: Central Region champion.
“We had a good car. This thing has been awesome all year. It’s a bucket list thing winning the Series. I wish it hadn’t been a shortened season but when we ran we ran well,” said Janczuk.
“We’ll take this first-ever Series championship!”
Victory Lane seemed just out of reach in Canandaigua but the No. 33X driver looks like he has it figured out now.
“We have a bunch of seconds here and I just couldn’t figure this place out. We won last time but we don’t have many starts here,” noted Janczuk. Maybe six in my whole career. To get these wins is awesome.”
Although the race was green from flag to flag, it was not an easy win for the champ. He spent his time on the front stretch trying to make out where Kevin Root in his No. 34 was running in the field as he was second in points all while defending against Brett Senek and managing traffic. Root was also the defending Series and track champion so Janczuk knew he could come out of nowhere to the front.
“I could see the 111 and the 38 were on the leader board between me and Kevin Root who got up to fourth at the end,” Janczuk said. “I knew we had a good car. We struggled in lapped traffic a little bit and I didn’t know if we had gapped those guys are not.”
Runner-up Brett Senek normally races at Ransomville Speedway but with limited opportunities to race anywhere in 2020, Senek found himself making starts at Land of Legends Raceway. Senek chased Janczuk all night but just couldn’t get the break he needed to make a serious run.
“He was fast. I thought once we got into traffic that I would have something for him. I couldn’t get through the traffic like him,” noted Senek. “Once we caught some cars I thought I had a chance but he’s just really good.”
Zach Sobotka came in strong, leading the Hoosier Racing Tire Weekly Championship, and ready to go for a Series win. Unfortunately, the No. 38 team missed the Feature setup a little bit.
“We had a good car but it was a bit free. All around it was a pretty good night for us. I thought that once Janczuk hit traffic that the 111 and myself would catch him but we didn’t,” Sobotka said similarly to Senek. The stars seemed to be aligned for Matt Janczuk.
AJ Miller is the recipient of one free tire courtesy of Hoosier Racing tire.
Don’t forget to get all your DIRTcar OktoberFAST information here. Competitors must register prior to September 30. To watch, get your DIRTVision Fast Pass today!
DIRTcar Sportsman Modified Series: Central Region 30-lap Feature Results
1. MATT JANCZUK 2. Brett Senek 3. Zach Sobotka 4. Kevin Root 5. Alan Fink 6. Paul Guererri 7. Kevin Ridley 8. Matt Guererri 9. Nick Guererri 10. Will Shields 11. AJ Lloyd 12. Zach Payne 13. Dalton Rombough 14. Payton Talbot 15. Andrew Buff 16. AJ Miller 17. Brian Fish 18. Garrison Krentz 19. Mike Fowler 20. Andrew Smith 21. Kane Bristol 22. Cody Wolfe 23. Kyle Inman 24. Joe Shields 25. Chris Mackey 26. Derek Webb 27. Dan Grignon 28. Zach George 29. Rocco Leone 30. Daryl Nutting
Posted by Bill McIntyre at Sunday, September 20, 2020