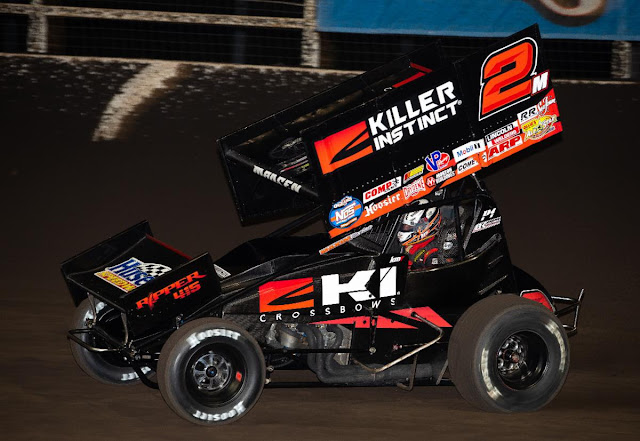 Inside Line Promotions - LERNERVILLE, Pa. (Sept. 29, 2020) - Kerry Madsen produced a pair of top fives and three top 10s during four races last week.
The Killer Instinct Crossbows sponsored driver guided Big Game Motorsports to a runner-up result a week ago Tuesday at Eldora Speedway near Rossburg, Ohio, during the opening night of the Governors Reign with the Ollie's Bargain Outlet All Star Circuit of Champions presented by Mobil 1. It was the best run of the week and marked Madsen's fifth top five of the season with the All Stars.
"I feel like we were really quick each night," he said. "In the Eldora deal we ran second and passed Brent Marks for the lead with two laps to go and he got back by. We were coming on good and reeling him in. I slid him in turns one and two. He turned down under it and found some grip down the backstretch. It was a really good run for us."
Madsen qualified fifth quickest, placed fourth in a heat race and won a dash prior to the podium performance in the feature.
He timed in 20th quickest the ensuing night during the event finale before winning a heat race to make the dash.
"The second night we put ourselves in a dash, but drew a really big number," he said. "We finished sixth, which started us 12th in the feature. We had a really good car in the A Main. I felt like we were a lot better than eighth. If we drew a little nicer toward the front of a dash, who knows. When you start that deep you need a dream run to get up through there."
Madsen gained a handful of positions to finish eighth.
Big Game Motorsports joined the World of Outlaws NOS Energy Drink Sprint Car Series for two races last weekend beginning on Friday at Wayne County Speedway in Orrville, Ohio. Madsen qualified fourth quickest and won a heat race to make the dash. A seventh-place outing in the dash lined him up on the inside of the fourth row for the main event.
"We had a good run going and then got a left front flat tire," he said. "It was pretty hard to pass there. We were running around where we started, gaining a spot and losing a spot here and there. One of the guys we were racing with and I had minor contact and it popped the left front. We had to go to the work area."
Madsen restarted at the back of the field and advanced to a 17th -place finish.
The weekend concluded on Saturday at Lernerville Speedway, which hosted the Commonweath Clash. Madsen qualified second quickest in his group and won both a heat race and the dash to garner the pole position for the main event.
"We were really good," he said. "We qualified well and were really good in the heat. I felt like we were really strong in the dash, too. They did some track prep before the A Main. Starting on the bottom was a disadvantage because it was greasy so we lost a couple of spots right away. On the longer run we lost some pace. We had a yellow with two laps to go and our car came back alive. It was disappointing to end fifth. I thought we had a better car."
Madsen's fifth-place result was his fifth top five of the season with the World of Outlaws.
He will return to action this week with the Outlaws during the 58 th annual Champion Racing Oil National Open at Williams Grove Speedway in Mechanicsburg, Pa. The event on Friday and Saturday culminates with a $75,000 top prize, making it the highest-paying winner's share in sprint car racing this year.
"I feel like we have good pace at Williams Grove," Madsen said. "Whoever wins is going to have to have a dream night in terms of getting yourself in position. If you can get yourself in position then you have a shot. We race well there so I think we have a legitimate shot to win."
QUICK RESULTS -
Sept. 22 - Eldora Speedway near Rossburg, Ohio - Qualifying: 5; Heat race: 4 (1); Dash: 1 (2); Feature: 2 (1).
Sept. 23 - Eldora Speedway near Rossburg, Ohio - Qualifying: 20; Heat race: 1 (1); Dash: 6 (5); Feature: 8 (12).
Sept. 25 - Wayne County Speedway in Orrville, Ohio - Qualifying: 4; Heat race: 1 (2); Dash: 7 (6); Feature: 17 (7).
Sept. 26 - Lernerville Speedway in Sarver, Pa. - Qualifying: 2; Heat race: 1 (1); Dash: 1 (1); Feature: 5 (1).
SEASON STATS -
59 races, 1 win, 15 top fives, 37 top 10s, 42 top 15s, 49 top 20s
UP NEXT -
Friday and Saturday at Williams Grove Speedway in Mechanicsburg, Pa., for the 58th annual Champion Racing Oil National Open with the World of Outlaws NOS Energy Drink Sprint Car Series
MEDIA LINKS -
Twitter: https://twitter.com/BigGameMotorspt
KILLER INSTINCT CROSSBOWS -
Killer Instinct is passionately committed to developing high-performance crossbows with precision, accuracy and dependability in mind. The company combines superior craftsmanship with next-level design, technical innovation and uncompromising quality so you can have the ultimate confidence in your gear.
The Killer Instinct Crossbow lineup features the Hero 380 (rugged power fit for the hunt); the Brawler 400 (lightweight slugger for any sized hunter with ultimate size and balance); the Ripper 415 (wicked speed and wicked performance); and the Fruious Pro (compact muscle with the latest stealth performance and technology).
For more information, visit http://www.HuntKillerInstinct.com .
INSIDE LINE PROMOTIONS -
Inside Line Promotions specializes in affordable public relations and media management for motor sports drivers, teams, sponsors, tracks, series, events, organizations and manufacturers. ILP Founder Shawn Miller leverages professional journalism with new media technologies and social networking to improve your exposure and the return on investment for your sponsors.
To meet the media relations needs of your program by joining Team ILP, contact Shawn at 541-510-3663 or Shawn@InsideLinePromotions.com . For more information on Inside Line Promotions, visit http://www.InsideLinePromotions.com.
*PHOTO BY TRENT GOWER PHOTOGRAPHY*
Posted by Bill McIntyre at Wednesday, September 30, 2020