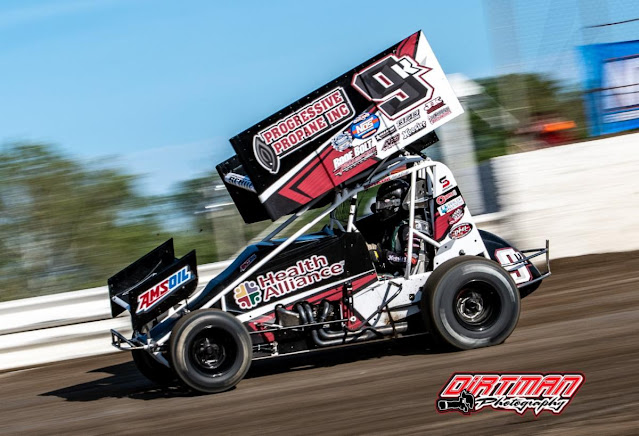 Inside Line Promotions - PLYMOUTH, Wis. (Sept. 9, 2020) - Two top-15 finishes at two new tracks highlighted Kyle Schuett's weekend of racing with the Bumper to Bumper IRA Outlaw Sprint Series.
"I thought we did pretty well last weekend, especially since it was our first time to both tracks," he said.
Schuett's weekend began Friday night with a rare appearance on a half-mile track at Dodge County Fairgrounds in Beaver Dam, Wis. His first laps of competition didn't go as well as hoped for when a cracked wheel caused a rear tire to lose air and forced him from his heat race while he was running second. He eventually finished third in the B Main, which transferred him into the 20th starting position in the A Main.
"The half-mile track took some getting used to since we don't run many of those," he said. "We had an issue with a wheel in our heat race and had to qualify through the B Main.
"Early in the A Main I had to slow for a guy who did a 360 and that led us to getting lapped pretty early. But we were still able to pass some cars and move forward. We eventually finished 14th. We were way off on our stagger, which can happen when you're at a track for the first time. All things considered, I thought we did all right."
Schuett's evening got off to a much better start the following night at Plymouth Dirt Track. After qualifying seventh quickest out of 30 cars, he took the lead early in his heat race and pulled away to win by more than three seconds. However, Schuett caught a bad break in the draw for his dash when he plucked the fifth and final starting spot.
"I was right behind Josh Schneiderman the entire race," he said. "I wanted to poke my nose in there, but I also didn't want to wreck anything without a good opportunity to make a pass so I settled for fifth."
Schuett's result in the dash placed him in the ninth starting spot in the A Main.
"I was able to move up to about seventh before we had a caution with about 12 laps to go," he said. "Everyone was running the bottom so on the restart I decided to be different and run the top. I gained some ground running the top in turns one and two, but then I lost some in turns three and four.
"Eventually I started losing more ground than I was gaining and that's when I should've moved back to the bottom. Unfortunately, I was too stubborn and still thought I could make it work. I eventually got freight trained before I gave up and moved back down. I finished 14th.
"We are excited to return to Dodge County Fairgrounds and Plymouth Dirt Track on Sept. 25-26 for the final two IRA Series races of the season."
Sunday's IRA Series event rained out.
Schuett will spend this weekend closer to home in competition with the Built Ford Tough MOWA Sprint Car Series at Jacksonville Speedway in Jacksonville, Ill., on Friday and at Spoon River Speedway in Canton, Ill., on Saturday.
"We're looking forward to racing with MOWA at tracks we're familiar with," he said. "We stumbled onto something recently when we changed our left rear suspension. Our car is working much better now and we're looking forward to a strong finish to our season."
QUICK RESULTS -
Sept. 4 - Dodge County Fairgrounds in Beaver Dam, Wis. - Qualifying: 11; Heat race: DNF (1); B Main: 3 (1); Feature: 14 (20).
Sept. 5 - Plymouth Dirt Track in Plymouth, Wis. - Qualifying: 7; Heat race: 1 (1); Dash: 5 (5); Feature: 14 (9).
SEASON STATS -
15 races, 0 wins, 0 top fives, 2 top 10s, 7 top 15s, 10 top 20s
UP NEXT -
Friday at Jacksonville Speedway in Jacksonville, Ill., and Saturday at Spoon River Speedway in Canton, Ill., with the Built Ford Tough MOWA Sprint Car Series
MEDIA LINKS -
Website: http://www.SchuettRacing.com
Twitter: https://twitter.com/SchuettRacing
Facebook: https://www.facebook.com/Schuett-Racing-Inc-764142200301233/
SPONSOR SPOTLIGHT - R&B Powder Coating
Located in Charleston, Ill., R & B Powder Coating owner Rick Pemberton offers commercial and residential powder coating and sandblasting with the goal of making finished products look better and last longer. For more information, visit https://www.facebook.com/R-B-Powdercoat-478593278995132/ .
"R & B provides exceptional powder coating services," Schuett said. "They have powder coated our race cars for over 10 years now. When it comes to powder coating that can hold up to the wear and tear during the racing season, R & B is the only place to go. We really appreciate their continued support."
Schuett would also like to thank Health Alliance, Progressive Propane, AMSOIL, Roof Bolt Transport, Engler Machine and Tool, Hoosier Tire Midwest, Allstar Performance, Safety Kleen (The Official Environmental Service Company of Schuett Racing), Diversified Machine (DMI), Rod End Supply, Hooker Harness, Steve Thomas Racing, Smith Titanium and J & K Property Rentals, LLC., for their continued support.
INSIDE LINE PROMOTIONS -
Inside Line Promotions specializes in affordable public relations and media management for motor sports drivers, teams, sponsors, tracks, series, events, organizations and manufacturers. ILP Founder Shawn Miller leverages professional journalism with new media technologies and social networking to improve your exposure and the return on investment for your sponsors.
To meet the media relations needs of your program by joining Team ILP, contact Shawn at 541-510-3663 or Shawn@InsideLinePromotions.com . For more information on Inside Line Promotions, visit http://www.InsideLinePromotions.com.
*PHOTO BY DIRTMAN PHOTOGRAPHY*
Posted by Bill McIntyre at Thursday, September 10, 2020