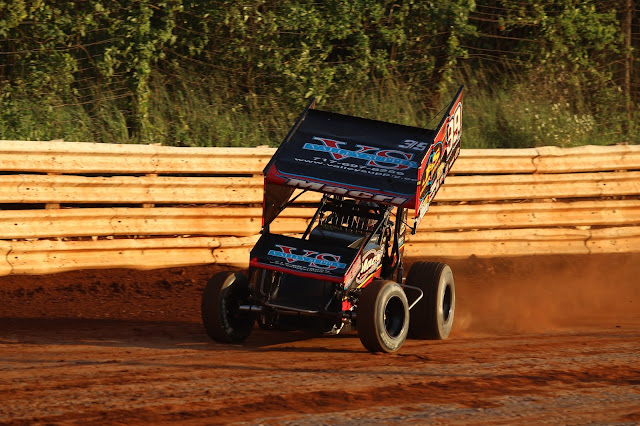 9/6/20
Selinsgrove, Pa. – Anthony Macri picked up the 30-lap National Open Qualifier for 410 sprints at Selinsgrove Speedway on Sunday night, besting Brent Marks after a battle for the lead with nine circuits to go.
Macri’s first career oval win was worth $5,000 and it earned him a guaranteed starting spot in the September 26, $20,000 to win National Open Jim Nace Memorial.
Danville’s Jeff Rine drove around Pittsburgh’s Jared Miley to pick up the 30-lap ULMS super late model feature worth $4,000.
The victory was Rine’s 112th at the track and it saw him record the Civil War Super Late Model Series title as waged between Selinsgrove and Williams Grove Speedways.
Jake Jones took the lead on a final lap restart to pick up the 12-lap roadrunner feature to close out the night.
AJ Flick had the pole flanked by Anthony Macri for the start of the 410 sprint feature.
The first lap was halted before it could be completed for a violent backstretch crash that saw Indiana’s Justin Peck and Port Royal’s Dylan Cisney flip hard.
Cisney was transported to a nearby hospital for tests and was released very early Monday morning with no injuries.
Macri soared into control over third starter Brent Marks on the first completed circuit with Flick running third.
Leader Macri entered the rear of the field on lap eight with sixth starter Brock Zearfoss now up to third and ready to challenge.
In what would turn out to be a non-stop event, the pace became dizzying by the halfway point as 10th starter Brian Brown drove up to fourth.
But it was the front trio that would settle the event while racing through traffic and with 10 laps to go, all three drivers were running under a blanket within one turn of each other, contesting for the to spot.
Marks blasted under Macri to take the lead deep in the first corner on lap 20 before sliding up in front to take Macri’s line.
Macri then dropped off of the cushion and raced back to Marks’ inside as the pair shot down the backstretch and into the third turn, still side by side.
Macri bolted low through turns three and four and was able to reclaim command back to the stripe with nine laps to go.
The leader then dropped to the low side in the first and second turns to regroup as Zearfoss raced with Marks for the runner-up spot.
With four laps to go, Zearfoss was able to secure second and start tracking down leader Macri but he failed to get quite close enough to make a bid for control.
Macri took the victory by .915 seconds with Brown riding home third followed by Marks and 17th starter Danny Dietrich, who earned the hard charger award worth $200.
Sixth through 10th went to Blane Heimbach, Freddie Rahmer, AJ Flick, Brian Montieth and TJ Stutts.
Heats went to Marks, Lucas Wolfe and Heimbach with Cisney scoring the consolation race.
Pittsburgh’s Jared Miley took the early lead from the outside of the front row in the 30-lap ULMS late model main and was leading over Jim Bernheisel with a 2.7 second advantage when the pace was slowed with seven laps in the book.
Running third for the restart, Centerville’s Max Blair took second on the restart and closed in on Miley while 10th starter Jeff Rine motored up to third.
Working the outside lane using maximum horsepower, Rine overtook Blair for second on lap 14 and then went to work on Miley to be scored the leader of lap 15.
The pace was then again slowed with 14 laps to go but Rine proved in control for the balance of the race.
Blair got by Miley for second with 10 laps to go but failed to get to Rine before the finish although he kept him honest the entire distance.
Rine’s margin of victory was .602 seconds with Miley finishing third followed by 16th starter Gregg Satterlee and Jim Bernheisel.
Sixth through 10th went to Jim Yoder, Shaun Jones, Mike Lupfer, Brett Schadel and Nathan Long.
Heats went to Blair, Kyle Knapp and Hayes Matter.
Fast time over the 26 car field was set by Blair with a lap of 18.870 seconds.
Scott Dunham Jr. led all but the final lap of the 12-lap roadrunner main.
Early in the race Will Brunson pressured Dunham for the lead but late in the event Jake Jones proved to be the challenger.
Jones got by Brunson and into second with two laps to go but then actually had to take the lead three times before he could be scored the official pacesetter as it took three different attempts to get the final lap recorded.
The victory was Jones’ fourth of the year at the track.
Brunson ended up second followed by Nathan Romig, Tom Brunson and Jimmy Kessler.
Heats went to Will Brunson and Dunham.
Feature Finishes, 9/6/20
410 sprints, 30 Laps: 1) 39M Anthony Macri 2) 3Z Brock Zearfoss 3) 21 Brian Brown 4) 5M Brent Marks 5) 48 Danny Dietrich 6) 12 Blane Heimbach 7) 51 Freddie Rahmer 8) 2 AJ Flick 9) 21 Brian Monteith 10) 11 TJ Stutts 11) 45 Jeff Halligan 12) 24 Lucas Wolfe 13) 35 Jason Shultz 14) 67 Justin Whittal 15) 33W Michael Walter 16) 12B Robert Ballou 17) 24B Dustin Baney 18) 99M Kyle Moody 19) 91 Kyle Reinhart 20) 5B Justin Barger 21) 19 Curt Stroup 22) 40 George Hobaugh 23) 39 Justin Peck 24) 5C Dylan Cisney
DNQ: Greg Plank, Jason Wagner, Dylan Norris
Limited Late Models, 30-Laps: 1) 2J Jeff Rine 2) 111 Max Blair 3) 10 Jared Miley 4) 22 Gregg Satterlee 5) 31 Jim Bernheisel 6) 27 Jim Yoder 7) 32 Shaun Jones 8) 06 Mike Lupfer 9) 22 Brett Schadel 10) 63 Nathan Long 11) 171 Bryan Bernheisel 12) 61 Ken Trevitz 13) 6 Donnie Schick 14) 2 Andrew Yoder 15) 9 Hayes Mattern 16) 11 Kirk Baker 17) 1 Gene Knaub 18) 4S David Scott 19) 14Z Dave Brouse Jr. 20) X Wyatt Scott 21) 33K Kyle Knapp 22) 10 Dave Stamm
DNS: Jeremy Ohl, Andy Haus, DeShawn Gingerich, Dylan Yoder
Posted by Bill McIntyre at Monday, September 07, 2020