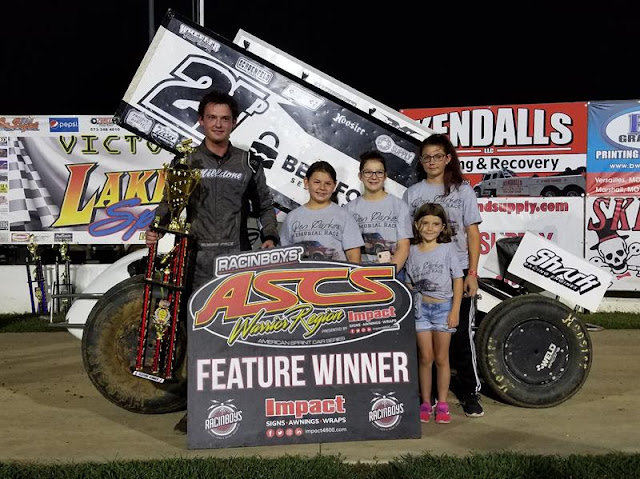 Inside Line Promotions - ELDON, Mo. (Sept. 9, 2020) - Robbie Price picked up his first victory of the season on Saturday night at Lake Ozark Speedway during the opening night of the 11th annual LOS 360 Nationals, which featured more than 60 drivers during the ASCS Warrior Region event.
The triumph was his first since August 2019 and continued what has been a strong second half of the 2020 racing season for the Cobble Hill, B.C., native. He also finished 21st during the weekend finale on Sunday.
"We've stumbled onto some stuff here lately and I feel like it's been a lot of higher points than low points as we wind down this season," he said. "It's a good feeling to be in Victory Lane and know all the hard work is paying off."
Price kicked off the weekend by charging forward six positions in a heat race to finish third on Saturday. He then passed two cars to place fourth in a qualifier. Based on passing points earned, Price lined up on the outside of the front row for the feature.
He jumped out to the lead at the drop of the green flag and despite a minor hiccup in traffic, Price wasn't challenged as he led all 25 laps to take the $3,000 prize.
"I was not very optimistic to start the night as we drew horrible, but our heat race run set us up for success and all I had to do was not go backwards in the qualifier," he said. "In the feature the start was the key as I just needed to get out front and hit my marks.
"I got up over the berm there in traffic and saw a few cars go by and I thought it was over. But when I came around and saw we were still leading I knew I just needed to calm down and we'd be okay."
Price returned to the track on Sunday and he struggled to build on the momentum as he finished fifth in a heat race. As a result he had to run a B Main, which he won from the eighth starting spot to lock into the feature in the 18th starting position.
Price moved forward in the early laps of the A Main, but got into the fence and bent an axle. He made a few more laps, but the car wasn't handling properly as a result of the contact so he pulled off early and was credited with the 21st finishing position.
"The competition in our heat race was stacked and we were just off setup-wise and you can't do that in these races," he said. "We went hard at it and got into the A Main and we were actually pretty good early in the race. But I got it into the guardrail and the car was no good afterwards, so we pulled off and saved the car from any further damage."
Next up for Price will be two days of racing at I-80 Speedway in Greenwood, Neb. On Friday he will join the Carpet Land Nebraska 360 Sprints during the Bobby Parker Memorial while Saturday will be the Casey's General Store Midwest Fall Brawl sanctioned by the Lucas Oil ASCS National Tour.
"There were a lot of cars at Lake Ozark who will be at I-80 and we were able to beat them so that tells me that I can do this at this level," he said. "I'm looking forward to the challenge and I think we'll be fast out the gate."
QUICK RESULTS -
Sept. 5 - Lake Ozark Speedway in Eldon, Mo. - Heat race: 3 (9); Qualifier: 4 (6); Feature: 1 (2).
Sept. 6 - Lake Ozark Speedway in Eldon, Mo. - Heat race: 5 (3); B Main: 1 (8); Feature: 21 (18).
SEASON STATS -
26 races, 1 win, 3 top five, 8 top 10s, 10 top 15s, 13 top 20s
UP NEXT -
Friday and Saturday at I-80 Speedway in Greenwood, Neb., for the Casey's General Store Midwest Fall Brawl with the Carpet Land Nebraska 360 Sprints and the Lucas Oil ASCS National Tour
MEDIA LINKS -
Twitter: http://www.twitter.com/RPrice21
Facebook: https://www.facebook.com/rpracing21/
SPONSOR SPOTLIGHT - Millstone Heating & Sheet Metal
Millstone Heating & Sheet Metal has been serving Duncan, the Cowichan Valley and Vancouver Island in British Columbia, Canada, since 1996. Seven certified journeymen with more than 90 years of combined experience provide quality craftmanship to complete residential and commercial HVAC projects as well as custom fabrication. For more information, visit http://www.MillstoneHeating.com .
"Millstone Heating & Sheet Metal specializes in commercial and residential heating and air conditioning installation," Price said. "It has been instrumental in my racing career and I appreciate the support from everyone at the company."
Price would like to thank Wildlight Motorsports Photography, Shockwave Motorsports, Beaufort Self Storage Ltd., Shark Racing Engines, Triple X Race Components, Highline Performance and Champion Brands for their continued support.
INSIDE LINE PROMOTIONS -
Inside Line Promotions specializes in affordable public relations and media management for motor sports drivers, teams, sponsors, tracks, series, events, organizations and manufacturers. ILP Founder Shawn Miller leverages professional journalism with new media technologies and social networking to improve your exposure and the return on investment for your sponsors.
To meet the media relations needs of your program by joining Team ILP, contact Shawn at 541-510-3663 or Shawn@InsideLinePromotions.com . For more information on Inside Line Promotions, visit http://www.InsideLinePromotions.com.
*PHOTO BY TERRY FORD*
Posted by Bill McIntyre at Thursday, September 10, 2020