Rahmer And Newlin Win On Wild Night At Williams Grove 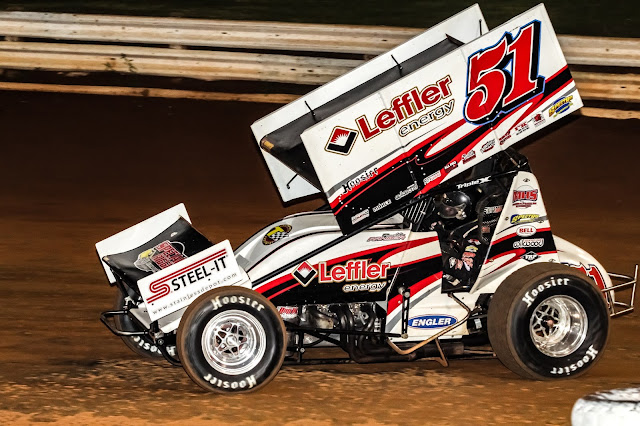 Mechanicsburg – Freddie Rahmer scored his second 410 sprint car win on the season at Williams Grove Speedway on Friday night in the Bob Stewart Tribute race, worth $5,012 to win.
Rahmer got the win by bolting past race-long leader Anthony Macri with just over two laps to go in the 25-lap main event.
In the 358 sprint main, Zach Newlin took his first ever win at the track in the division.
Anthony Macri started on the pole of the 410 sprint main flanked by Lucas Wolfe and when the green flag came out, fourth starter Brian Montieth flipped outside the first corner after losing a front wheel, causing an immediate red flag.
Only two laps were then recorded before a yellow flag bunched the field with Marcri leading Wolfe.
Third starter Rahmer got around Wolfe on the restart just before another red flag, this time for a turn one flip by Trenton Sheaffer.
Macri restarted with the lead over Rahmer and was still ahead when another yellow flag slowed the pace with just seven laps completed, this time for a slowed Danny Dietrich who had just taken third from Wolfe.
Yet another yellow flag regrouped the field on lap 11 but the final 14 circuits would end up going non-stop with Rahmer slowly but surely running down leader Macri.
Brent Marks would take third from Wolfe twice on laps 13 and 14 before finally making the move stick and entering the fray for the win before the finish.
Leader Macri entered traffic with seven laps to go but his undoing began on lap 22 when he skipped over the cushion in turn one as he set the car into the corner.
This allowed Rahmer to close the remaining distance between himself and Macri and when Macri again slipped up over the next time around, Rahmer was there to capitalize.
Rahmer followed Macri down the backchute as the pair headed for the two-to-go sign and then he swooped across the inside of the third and fourth turns to come up off of the corner alongside the leader.
A little right rear to left front contact in the blink of an eye found Macri edged out back to the line and Rahmer heading for the win.
However the front trio seemed to be faltering over the final two laps with no one able to get away from one another while sliding around on the track.
Marks did get Macri on the final circuit and was all over Rahmer to the finish, crossing the line just. .268 seconds behind at the checkers.
Macri was relegated to third followed by Wolfe and TJ Stutts.
Sixth through 10th went to Matt Campbell, Brian Brown, Danny Dietrich, Brock Zearfoss and Jeff Halligan.
Heats went to Macri, Stutts and Wolfe.
Rahmer set quick time over the field with a lap of 16.569 seconds.
The start of the 358 sprint main was immediately halted when Doug Hammaker hopped a right rear as the green fell before careening hard into the outside fence before flipping back into traffic as the field raced onto the frontstretch.
Hammaker and Kyle Denmyer made hard contact along with four other cars although there were no injuries.
Matt Findley would take the lead when action got going only to be stopped on lap four when Nat Tuckey flipped down the frontchute past the flagstand and again there were no injuries.
Another red flag ensued on the restart for a stopped Jacob Galloway.
Lap seven saw two cars connect in the first turn again hampering the pace.
Fourth starter Zach Newlin had taken second on lap six and on the lap seven restart he was working on Findley for the lead.
With his car working perfectly down low in the second corner, Newlin drove past Findley for control with 11 laps to go to head to the victory.
Derek Locke took second with six laps to go but failed to close in on the leader.
Findley rode home third followed by Chris Arnold and Dylan Norris.
Heats went to Zachary Cool, Findley, Arnold and Newlin with Kevin Nouse scoring the consolation race.
Feature Finishes
410 sprints, 25 laps: 1. Freddie Rahmer, 2. Brent Marks, 3. Anthony Macri, 4. Lucas Wolfe, 5. TJ Stutts, 6. Matt Campbell, 7. Brian Brown, 8. Danny Dietrich, 9. Brock Zearfoss, 10. Jeff Halligan, 11. Kyle Moody, 12. Kyle Reinhardt, 13. Justin Peck, 14. Brett Michalski, 15. Chase Dietz, 16. Robert Ballou, 17. Steve Surniak, 18. Dwight Leppo, 19. Troy Fraker, 20. Adrian Shaffer, 21. Trenton Sheaffer, 22. Brian Montieth, 23. Chad Trout
DNS: Tyler Ross
358 sprints, 20 laps: 1. Zach Newlin, 2. Derek Locke, 3. Matt Findley, 4. Chris Arnold, 5. Dylan Norris, 6. Steve Owings, 7. Chris Frank, 8. Justin Foster, 9. Ashley Capetta, 10. Kevin Nouse, 11. Jordan Givler,12. Scott Fisher, 13. Brett Strickler, 14. Cody Fletcher, 15. Jordan Strickler, 16. Zachary Cool, 17. Wyatt Hinkle, 18. Russell Hammaker, 19. Jacob Galloway, 20. Nat Tuckey, 21. Doug Hammaker, 22. Kyle Denmyer, 23. Brett Wanner, 24. Tyler Brehm
DNQ: Tyler Templin, Hannah Riser, Shane Yost, Brett Rose, Billy Heltzel, Chad Criswell, Kyle Rohrbaugh, Mark Van Vorst, Dylan Orwig
Posted by Bill McIntyre at Saturday, September 05, 2020