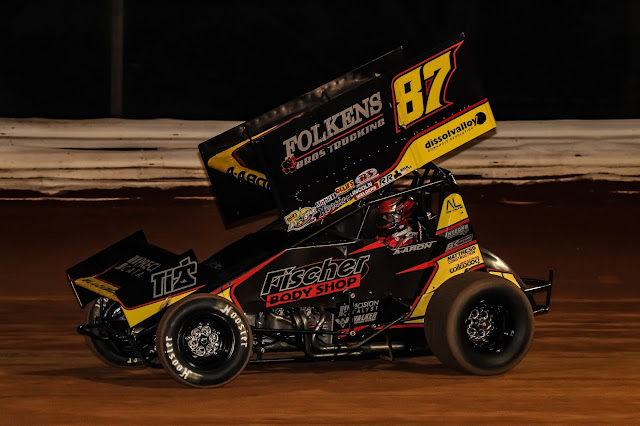 Lonnie Wheatley, CLUTE, Texas (September 22, 2020) – Aaron Reutzel and the Baughman-Reutzel Motorsports No. 87 Sprint Car team bolstered their All Star Circuit of Champions points lead over the weekend with his 14th overall win of the 2020 season.
It was a three-race week which included a fourth-place finish in last Wednesday night’s Weldon Sterner Memorial at Lincoln Speedway. A pair of All Star events followed with a Friday night triumph at Williams Grove Speedway and then a runner-up finish in Saturday night’s “Dirt Classic” at Lincoln Speedway.
It sets the stage for a full week of racing with the All Star Circuit of Champions and World of Outlaws.
The All Stars are back in action with Eldora Speedway’s “Governor’s Reign” in Rossburg, OH, on Tuesday and Wednesday. Reutzel and the Folkens Brothers Trucking/Dissolvalloy Downhole Revolution Triple-X Sprint Car team then shift into World of Outlaws action at Indiana’s Plymouth Speedway on Thursday night and then western Pennsylvania’s Lernerville Speedway on Saturday night.
Reutzel kicked off last week’s set of events by topping the speed charts in qualifying on Wednesday night at Lincoln aboard the Precision Catalyst/Hollywood Blasting & Coating/Beard Equipment entry and then finishing out the night fourth in the feature after starting fifth.
Back into points action for Friday’s Jack Gunn Memorial at Williams Grove Speedway, Reutzel won his heat race to earn a Dash starting position aboard the Nattress Construction/Momentum Racing Suspension entry and then led the final 17 laps of the feature event for his 14th win of the season.
“We got a little lucky at Williams Grove, we didn’t qualify very good but that put us on the front row of our heat and we were able to win that to get in a Dash,“ Reutzel explains. “We had a really, really good car for the feature, I could run it anywhere on the track that I needed to.”
Back to Lincoln Speedway on Saturday night for the $20,000-to-win Dirt Classic, Reutzel topped his qualifying group in the Fischer Body Shop machine. He then posted a runner-up finish in his first heat and then sixth in his second heat in the twin-heat event.
“Lincoln started out good, we ran second to Kyle (Larson) in the first heat, but on the second heat we missed it with the car,” Reutzel recalls. “If we would have been one position better in that second heat, that would have put us on the front row of the feature.”
Instead, Reutzel gridded the feature inside the third row. Reutzel worked his way forward to post a runner-up finish for the night.
“I got up to third when it rubbered up, then I was able to get second on a restart when the guy that was there slipped out of the rubber,” Reutzel wraps up.
Three tracks await Reutzel and crew this week and he has put the BRM No. 87 in victory lane in his last visit to each of the tracks.
The “Governor’s Reign” at Eldora Speedway is Reutzel’s first visit to the Ohio facility since putting the finishing touches on his second All Star Circuit of Champions title last September.
After the All Star double at Eldora, Reutzel takes on the World of Outlaws at a pair of tracks at which he has been unbeaten in All Star Circuit of Champions action over the past three seasons. Reutzel has been victorious in each of the past three years at Indiana’s Plymouth Speedway and topped 2018 and 2019 events at Lernerville Speedway.
2020 Quick Stats: 72 races, 14 wins, 36 top-fives, 49 top-tens.
Next Up:
Tuesday and Wednesday – All Star Circuit of Champions at Eldora Speedway’s (Rossburg, OH) “Governor’s Reign”
Thursday – World of Outlaws at Plymouth (IN) Speedway
Saturday – World of Outlaws at Lernerville Speedway (Sarver, PA)
Keep Track: Keep track of Aaron Reutzel’s on-track action including schedule and results at http://www.aaronreutzelracing.com/, on Facebook at https://www.facebook.com/pages/Aaron-Reutzel-Racing/117666254913127 or on Twitter at @AaronReutzel. You can also e-mail Aaron at aaronreutzel@yahoo.com.
If you would like Aaron Reutzel Racing press releases e-mailed directly to you, send your e-mail address to Lonnie Wheatley at lonniewheatley@gmail.com.
Posted by Bill McIntyre at Wednesday, September 23, 2020