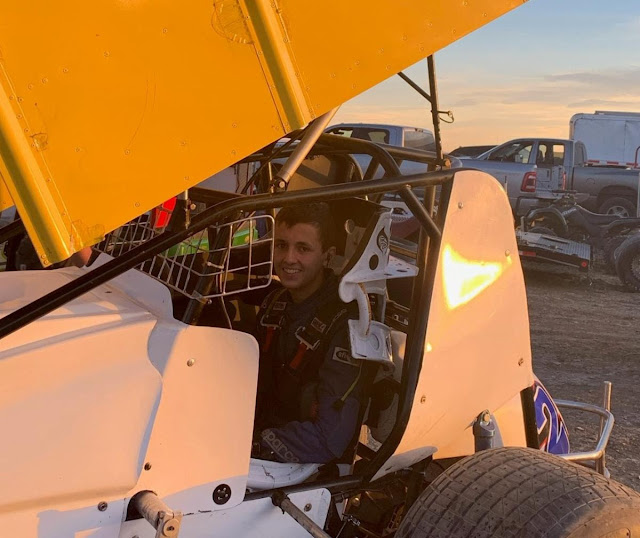 Inside Line Promotions - GREAT FALLS, Mont. (Sept. 1, 2020) - James Setters secured his second straight Rocky Mountain Sprint Car Series championship last Friday at Electric City Speedway.
Setters nearly swept the night for the fourth time this season, which would have given him the clean sweep of feature victories this year in the Mike Quigley owned sprint car.
Instead, Setters, who charged from fifth to win a heat race, gave up his front row starting position in the A Main to tag the field.
"Cody Ryan said, 'I'll give you a $100 to start in the back,' so we went for it," he said. "I think on Lap 6 I was in third when a rock hit a spark plug. From then on I was running on seven cylinders. I made it up to second and almost passed Cody for the lead. If I would have run the bottom on the last lap I think I would have won.
"I was right on him. I almost got by him at one point, but didn't have enough engine since we were down a cylinder."
Setters narrowly finished second, which gave him a top-two run in all six series races this season en route to the title.
"I think it was worth it," he said. "I had a lot of fun coming from the back and running with less horsepower. I don't regret it. All I had to do was start the A Main to win the championship and that was my biggest goal.
"It means a lot, especially this season when we don't have a lot of races. It was nice to have something to show for the few races that we got to race."
Setters will pilot his family owned 360ci sprint car this Friday through Sunday at Electric City Speedway during the Montana Round Up.
QUICK RESULTS -
Aug. 28 - Electric City Speedway in Great Falls, Mont. - Heat race: 1 (5); Feature: 2 (10).
SEASON STATS -
11 races, 5 wins, 6 top fives, 9 top 10s, 10 top 15s, 11 top 20s
UP NEXT -
Friday through Sunday at Electric City Speedway in Great Falls, Mont., for the Montana Round Up
MEDIA LINKS -
Twitter: https://twitter.com/setters_james
Facebook: https://www.facebook.com/james.setters.188
Instagram: https://www.instagram.com/jameslsetters/
SPONSORS -
Setters would like to thank ProWest Motorsports, AFEX Graphics and Slade Shock Technology for their continued support.
INSIDE LINE PROMOTIONS -
Inside Line Promotions specializes in affordable public relations and media management for motor sports drivers, teams, sponsors, tracks, series, events, organizations and manufacturers. ILP Founder Shawn Miller leverages professional journalism with new media technologies and social networking to improve your exposure and the return on investment for your sponsors.
To meet the media relations needs of your program by joining Team ILP, contact Shawn at 541-510-3663 or Shawn@InsideLinePromotions.com . For more information on Inside Line Promotions, visit http://www.InsideLinePromotions.com.
Posted by Bill McIntyre at Wednesday, September 02, 2020