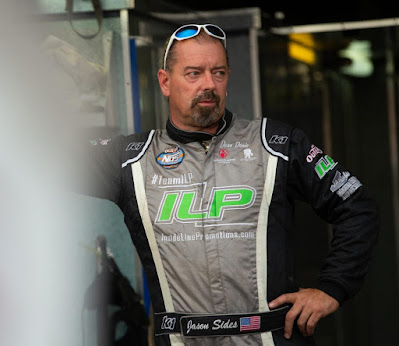 Inside Line Promotions - BRANDON, S.D. (Sept. 9, 2020) - Jason Sides was tied for the third-most positions gained during his first start at Huset's Speedway in more than four years last Saturday.
Sides kicked off the World of Outlaws NOS Energy Drink Sprint Car Series doubleheader at the oval by qualifying 13th quickest. He then placed sixth in a heat race before winning the Last Chance Showdown to lock into the back of the main event.
"We were pretty decent, but we were stuck in that first heat race and it was packed full of good cars," he said. "On the start we fell to sixth so we missed it and had to run the LCS. Once you do that you're starting in the back of the feature. We went a lap down halfway through and if we wouldn't have got lapped we would have been up there at the end of the race. We were one of two drivers to not have a flat tire."
Sides maneuvered from 21st to 13th during a race that was hampered by cautions in the closing laps because of drivers losing tires. However, since he was a lap down those drivers were able to restart in front of Sides after changing the tire.
Sunday's event started nearly the same with Sides timing in 11th quickest in his group. A sixth-place result in a heat race relegated him to the Last Chance Showdown. He placed second to transfer into the back of the main event.
"We should have made it through the heat race," he said. "We were a little tighter than the night before, but we were in a transfer for a few laps. We got to swapping spots for fourth and the next thing you know it let (Justin) Henderson get to us. I had a hard time seeing the bottom in turns three and four. I'd get too low and hit the grease and slid out, which allowed him to get by us for the final transfer.
"We made it through the LCS and we made a few spots up in the feature. Just as we were getting late in the race the leader came by me on the outside. I tried to not get in his way and I spun out. Someone monster trucked us, which tore up a couple of cars. We were going to restart, but it broke the front bottom radius mount off the axle."
Sides was unable to finish the race and was credited with a 22nd -place result.
Next up is a trip to one of his favorite tracks - Dodge City Raceway Park in Dodge City, Kan., this Friday and Saturday. Sides won World of Outlaws races at the track in 2011 and 2015.
"Anywhere you run good you have confidence and know that you should have a decent run," he said. "It seems like the way Memphis used to be built, the shape of it and the way it races, is similar. I had a lot of laps there. Our success (at Dodge City Raceway Park) might have something to do with that."
QUICK RESULTS -
Sept. 5 - Huset's Speedway in Brandon, S.D. - Qualifying: 13; Heat race: 6 (4); B Main: 1 (1); Feature: 13 (21).
Sept. 6 - Huset's Speedway in Brandon, S.D. - Qualifying: 11; Heat race: 6 (6); B Main: 2 (3); Feature: 22 (22).
SIDES MOTORSPORTS SEASON STATS -
58 races, 0 wins, 0 top fives, 7 top 10s, 23 top 15s, 39 top 20s
UP NEXT -
Friday and Saturday at Dodge City Raceway Park in Dodge City, Kan., for the Boot Hill Showdown with the World of Outlaws NOS Energy Drink Sprint Car Series
MEDIA LINKS -
Website: http://www.SidesMotorsports.com
Twitter: http://www.twitter.com/SidesMotorsport
Facebook: https://www.facebook.com/pages/Sides-Motorsports/283833970847?ref=br_tf
SPONSOR SPOTLIGHT - TORA TORA
TORA TORA is a blues-based hard rock band formed in Memphis, Tenn., in the late 1980s. Band members include Keith Douglas, Patrick Francis, John Patterson and Anthony Corder. TORA has two major releases Surprise Attack/Wild America through A&M Records that promoted five singles and videos (Walkin' Shoes, Guilty, Phantom Rider, Amnesia and Faith Healer). The band recently released a new album titled 'Bastards of Beale.' For more information, visit http://www.TORATORAMusic.com.
"It's an exciting relationship," Sides said. "They are from Memphis and we're from Memphis. A lot of good bands and a lot of good racers come from Memphis. I used to race dirt bikes with guys that were on their setup crew years ago. I've been to several concerts and listened to their music for 20-plus years. We're excited to have them as part of the team."
Sides would also like to thank Wetherington Tractor Service, Inc., BR Motorsports, East Coast Logistics, King Racing Products, VRP Shocks, Dancer Logistics, Inc., R.E. Enterprises, Jim Schuhknecht, FSR Radiators, Mid-States Equipment, Brad, Driven Racing Oil, Ingles Racing Engines, Wings Unlimited and All Pro Aluminum Cylinder Heads for their continued support.
INSIDE LINE PROMOTIONS -
Inside Line Promotions specializes in affordable public relations and media management for motor sports drivers, teams, sponsors, tracks, series, events, organizations and manufacturers. ILP Founder Shawn Miller leverages professional journalism with new media technologies and social networking to improve your exposure and the return on investment for your sponsors.
To meet the media relations needs of your program by joining Team ILP, contact Shawn at 541-510-3663 or Shawn@InsideLinePromotions.com . For more information on Inside Line Promotions, visit http://www.InsideLinePromotions.com.
*PHOTO BY TRENT GOWER PHOTOGRAPHY*
Posted by Bill McIntyre at Thursday, September 10, 2020