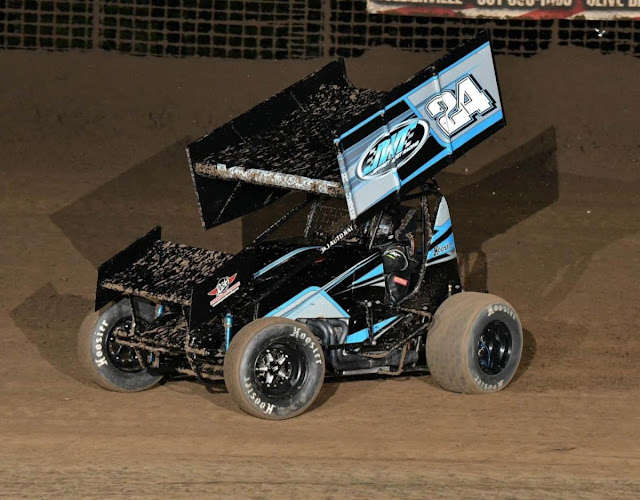 Inside Line Promotions - LITTLE ROCK, Ark. (Sept. 15, 2020) - Jeffrey West Jr. enjoyed a fast race car last Saturday at I-30 Speedway, which hosted the ASCS Mid-South Region and ASCS Lone Star Region during the Ralph Henson Memorial.
West Jr., who is ranked third in the ASCS Mid-South Region championship standings during his rookie season in a sprint car, charged from seventh to second place in a heat race.
"We hit the setup pretty good and the car felt great," he said. "I was able to put it where I wanted. It was the best we've been there. On the first lap going through turns three and four I dove to the bottom and passed about three to get to third. Two of them tangled so I was up to third on Lap 2. A lap or two after the restart I got a good run down the straightaway and dove under the second-place driver into turn one and hooked the bottom really good."
West Jr. made the feature redraw, but this event featured a pole shuffle. He competed in it for the first time in his career and lost his two-lap shootout with Howard Moore, placing West Jr. third on the feature starting grid.
"Going into the first turn we were a little too free," he said. "I got hit from behind in a racing deal. That caused me to spin so I had to go straight to the back. I restarted 20th and was able to get through three or four cars pretty quick running the bottom. We had a couple of cautions in the middle of the race. I was able to keep picking positions up as the feature went on. Toward the end I started running down a group running fifth through eighth, but we ran out of time."
West Jr. battled to overcome the early incident as he recorded a ninth-place finish. It was his best series result and top outing at the track.
"It's definitely a good confidence booster," he said. "We've struggled recently so we needed that. And that field was great. If we can be competitive with them we'll be good."
West Jr. will take this weekend off before competing on Sept. 26 at Riverside International Speedway in West Memphis, Ark.
QUICK RESULTS -
Sept. 12 - I-30 Speedway in Little Rock, Ark. - Heat race: 2 (7); Pole Shuffle: 3 (2); Feature: 9 (3).
SEASON STATS -
9 races, 0 wins, 0 top fives, 2 top 10s, 6 top 15s, 8 top 20s
UP NEXT -
Sept. 26 at Riverside International Speedway in West Memphis, Ark.
MEDIA LINKS -
Facebook: https://www.facebook.com/jeffreywestracing/
SPONSOR SPOTLIGHT - Mainline Safety and Supply, Inc.
Mainline Safety and Supply, Inc., specializes in safety products and various supplies for multiple industries such as pipeline, construction and public safety. Mainline is a small-town business that focuses on building relationships in order to meet the unique needs of its customers. For more information, visit https://www.facebook.com/Mainline-Safety-Supply-Inc-102055734677600/ .
"They deliver all kinds of warehouse equipment to companies that need it," West Jr. said. "They'll do sanitizing stuff and protective equipment. They are a new company that started this year and we're grateful to have their support."
West Jr. would like to thank Haley Electric, Flashe Graphics, Rick's Powder Coating and Jeff and Kim West for their continued support.
INSIDE LINE PROMOTIONS -
Inside Line Promotions specializes in affordable public relations and media management for motor sports drivers, teams, sponsors, tracks, series, events, organizations and manufacturers. ILP Founder Shawn Miller leverages professional journalism with new media technologies and social networking to improve your exposure and the return on investment for your sponsors.
To meet the media relations needs of your program by joining Team ILP, contact Shawn at 541-510-3663 or Shawn@InsideLinePromotions.com . For more information on Inside Line Promotions, visit http://www.InsideLinePromotions.com.
*PHOTO BY SCOTT FRAZIER PHOTOGRAPHY*
Posted by Bill McIntyre at Wednesday, September 16, 2020