WHERE IT STARTED: Pittman Excited About Potential In Home State Return Roth Motorsports eyes first win of 2020 with the 2013 World of Outlaws champion 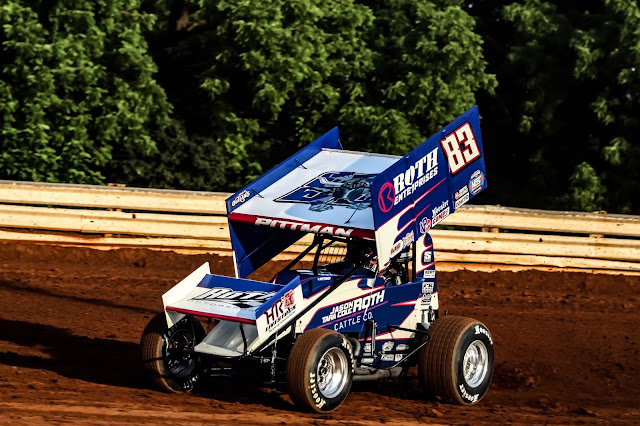 LAWTON, OK — Sept. 15, 2020 — Before hanging up his helmet as a full-time driver at the end of the year, Daryn Pittman will return to the site that helped launch his Sprint Car career this weekend.
For the first time since 1985, the World of Outlaws NOS Energy Drink Sprint Car Series returns to Lawton Speedway on Fri., Sept. 18. Pittman, the 2013 World of Outlaws champion, of Owasso, OK, earned his first career Sprint Car win in a regional American Sprint Car Series event at the Oklahoma track.
The Series will then venture to Devil’s Bowl Speedway – the birthplace of the World of Outlaws – in Mesquite, TX on Sat., Sept. 19. Pittman also grew up racing in the Texas area and has two wins at the historic track.
“I’m excited to go,” Pittman said. “That’s always kind of a special place for me there (at Lawton). One of my longtime car owners, Donnie Woodburn, is from Lawton. We have really good friends that live there as well that have followed us since racing Micros. So, we’ve got quite a few connections down that way. Any race in the Oklahoma-Texas area takes me back to where it all started. It’s exciting from my standpoint.”
While Pittman has a victory at Lawton Speedway, he doesn’t consider that to be an advantage. He joked he doesn’t really remember the track since he hasn’t been back there in nearly 20 years. And his ASCS win there wasn't because of a special reason.
“We just won,” Pittman said with a chuckle.
That’s again his goal this weekend as he and his Roth Motorsports team continue to search for their first victory of 2020. His last win came more than a year ago a Silver Dollar Speedway.
“We expect to run well and want to go for a win,” Pittman said. “I know it gets more and more difficult when you go this long into a season without a win. But I think if you don’t unload with that mentality it is time to do something different. We definitely know that we can do it. We just need to get better and make better decision as the night goes on.”
To fix that, Pittman said they’re looking at everything but the Feature at the moment. They’re focused on improving their qualifying and then how they perform in the Drydene Heat Races.
With a solid qualifying run they can they focus on getting a good finish in the Heat Race and get into the DIRTVision Fast Pass Dash, which would guarantee at least a top-eight starting spot.
“We just really break the night down as everything is its own segment,” Pittman said. “First our focus is on qualifying well. If you can do that, then we focus on the Heat Race. If you don’t qualify well, you focus on trying to salvage as much as you can out of your Heat Race because those spots are so important for your Feature starting spot. We just try to take it one step at a time. We’re not looking at the Feature right now. Right now, we’re focused on Qualifying. Then we move on to the next step depending on how that goes.”
He earned his first podium finish since July at Huset’s Speedway two weeks ago but has been in and out of the top-10 since. And while this will be his first World of Outlaws race at Lawton Speedway, Pittman can go into Devil’s Bowl Speedway with confidence having earned a runner-up finish at the track last year.
Pittman announced last week he'll step away from racing full-time in 2021. He wouldn’t call it retirement but will be focused on exploring other interests and avenues.
That’s for next year, though. With 14 races remaining this season, he’s focused on ending the year strong and adding to his win list.
“Long term is always in the back of your mind but right now we’re focused on getting this 83 (car) in Victory Lane,” Pittman said.
Get tickets for the event at Lawton Speedway by clicking here.
Get tickets for the event at Devil’s Bowl Speedway by clicking here.
If you can’t make it to the tracks, you can watch both races live on DIRTVision.
Posted by Bill McIntyre at Wednesday, September 16, 2020