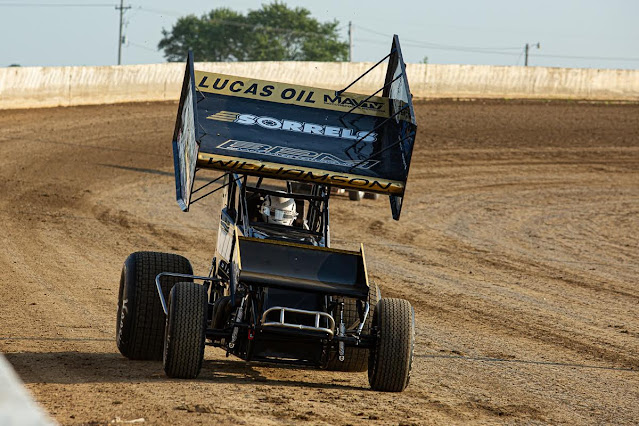 Inside Line Promotions - ELDON, Mo. (Sept. 10, 2020) - Sometimes, it takes more than a fast car to have a solid run in sprint car racing. You need a little luck and Garet Williamson was on the short end of that during the ASCS Warrior Region's 11th annual LOS 360 Nationals finale at Lake Ozark Speedway.
The Columbia, Mo., driver showed how far the Bryant Paver Motorsports team has come with a fourth-place finish on the opening night against a stout 63-car field last Saturday. On Night 2, Williamson had equal speed, but a pair of crashes took him out of competition and forced him to watch the rest of the evening.
"We were super fast and I think we had a car to run up front, but we didn't have any luck on the second day," he said. "We had a top-five car all week, especially Saturday night when we ran fourth.
"It sucked that we didn't get to run Sunday and show what we could do with that, but you just have to take away that you had a fast car. You can't win everything and sometimes that's racing."
Williamson won his heat race Saturday night and advanced from fifth to third in a qualifier. He then maintained his fourth starting position throughout the main event to earn his seventh top five of the season.
Riding plenty of confidence, Williamson finished third in his heat race Sunday night. He charged from eighth to third in a qualifier before another car made contact with Williamson on the frontstretch. His car suffered front-end damage and the 20-year-old was forced to run a B Main.
Williamson was in a transfer spot in the consolation race before he hopped a wheel. That put him out of action for the night.
But Williamson isn't down. He had a fast car and was a contender, which bodes well heading into this Saturday's Lucas Oil ASCS National Tour event - the Casey's General Store Midwest Fall Brawl - at I-80 Speedway in Greenwood, Neb.
"I don't even know when our last race was with the ASCS National Tour," he said. "I think it was Osky, and that was like a month ago. I think our program has gotten better every weekend, especially lately.
"We've been rolling. We picked up another win and ran up front with all the big guys. There were 63 cars at the Lake this weekend and there were a lot of good guys, and we were one of the fast guys.
"It gives us a bunch of confidence to run with the national guys again. Supposedly, I-80 is like Moberly and I really liked Moberly this year. So, hopefully, that carries over."
QUICK RESULTS -
Sept. 5 - Lake Ozark Speedway in Eldon, Mo. - Heat race: 1 (2); Qualifier: 3 (5); Feature: 4 (4).
Sept. 6 - Lake Ozark Speedway in Eldon, Mo. - Heat race: 3 (3); Qualifier: 8 (8); B Main: 13 (4).
SEASON STATS -
26 races, 3 wins, 7 top fives, 10 top 10s, 13 top 15s, 18 top 20s
UP NEXT -
Saturday at I-80 Speedway in Greenwood, Neb., for the Casey's General Store Midwest Fall Brawl with the Lucas Oil ASCS National Tour
MEDIA LINKS -
Twitter: https://twitter.com/garetw3
Facebook: https://www.facebook.com/Garet-Williamson-Racing-572353479787934/
SPONSORS -
Williamson would like to thank Mid-Mo Equipment, Lucas Oil Products, Sorrels Auto & Truck Parts, JBC Transport, LLC, Royal Power Sports, Mo State Construction, Schure Built Suspensions, Tiger Towing, Clems Signs and Maxim for their continued support.
INSIDE LINE PROMOTIONS -
Inside Line Promotions specializes in affordable public relations and media management for motor sports drivers, teams, sponsors, tracks, series, events, organizations and manufacturers. ILP Founder Shawn Miller leverages professional journalism with new media technologies and social networking to improve your exposure and the return on investment for your sponsors.
To meet the media relations needs of your program by joining Team ILP, contact Shawn at 541-510-3663 or Shawn@InsideLinePromotions.com . For more information on Inside Line Promotions, visit http://www.InsideLinePromotions.com.
*PHOTO BY RCM DESIGN*
Posted by Bill McIntyre at Friday, September 11, 2020