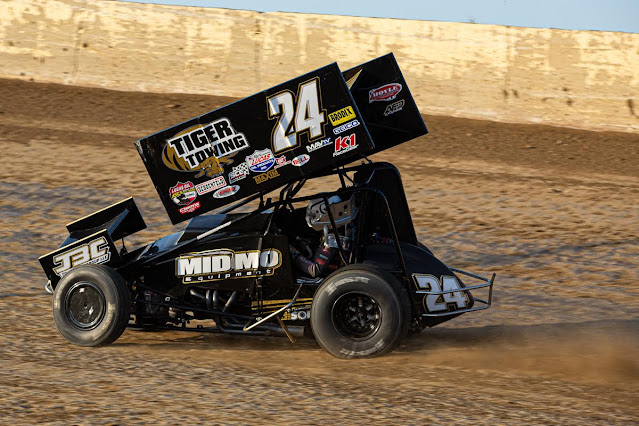 Inside Line Promotions - GREENWOOD, Neb. (Sept. 16, 2020) - Garet Williamson and his team showed last weekend that they can deal with adversity.
The trailer had a flat tire on the way to I-80 Speedway for the Casey's General Store Midwest Fall Brawl, which put the Bryant Paver Motorsports team a little behind. That's not a good way to start a day that includes facing the Lucas ASCS National Tour regulars.
But Williamson persevered. The Columbia, Mo., ace got off to a quick start in his heat race, which set him up for a respectable 12th-place showing in the first Lucas Oil ASCS National Tour event since Aug. 9.
"Obviously, when you start up that far you want to end up there," Williamson said of starting sixth and finishing 12th. "We kind of missed the setup a little bit, but we started the night off really good.
"We picked up a heat race win and to be back with the National guys, we ran decent with them. We had a long day so it was a good day for our team with what we went through."
Blowing a trailer tire on the way to the track didn't help. Luckily, rain and wet grounds delayed the start of the racing program. When the lights did go on, Williamson showed speed. He won his heat race from sixth and finished sixth in a qualifier, which lined him up on the outside of the third row in the feature.
Williamson said he struggled a bit during the 35-lap event, but considering how the day started, it was a decent run and helped him maintain the lead in the battle for Rookie of the Year.
"It was just one of those days," he said. "It felt good. I like running with those guys, but I wish we could've raced a little more consistently throughout the year.
"We would run with them for a weekend and then be off. It's nice to race hard with those guys and race clean and get the same thing back from them."
Williamson gets a chance to improve on last weekend's result when he heads to Lucas Oil Speedway in Wheatland, Mo., this Thursday through Saturday for the 10th annual Jesse Hockett/Daniel McMillin Memorial. Saturday's main event pays $10,000 to the winner.
"I'm super pumped," he said. "I think they are sitting at 83 entries so it's probably one of the biggest races of the year besides the 360 Knoxville Nationals. It's kind of close to home. There are going to be hometown fans there and it's on MAVTV, so you want to look good as a team.
"It's one of the races we ran at the end of last year and we can see how far we have come as a team. We definitely want to go out and have good, solid nights and lock into Saturday or get at the front of a qualifier to be able to lock it in the show."
QUICK RESULTS -
Sept. 12 - I-80 Speedway in Greenwood, Neb. - Heat race: 1 (6); Qualifier: 6 (6); Feature: 12 (6).
SEASON STATS -
27 races, 3 wins, 7 top fives, 10 top 10s, 14 top 15s, 19 top 20s
UP NEXT -
Thursday through Saturday at Lucas Oil Speedway in Wheatland, Mo., for the 10th annual Jesse Hockett/Daniel McMillin Memorial with the Lucas Oil ASCS National Tour
MEDIA LINKS -
Twitter: https://twitter.com/garetw3
Facebook: https://www.facebook.com/Garet-Williamson-Racing-572353479787934/
SPONSORS -
Williamson would like to thank Mid-Mo Equipment, Lucas Oil Products, Sorrels Auto & Truck Parts, JBC Transport, LLC, Royal Power Sports, Mo State Construction, Schure Built Suspensions, Tiger Towing, Clems Signs and Maxim for their continued support.
INSIDE LINE PROMOTIONS -
Inside Line Promotions specializes in affordable public relations and media management for motor sports drivers, teams, sponsors, tracks, series, events, organizations and manufacturers. ILP Founder Shawn Miller leverages professional journalism with new media technologies and social networking to improve your exposure and the return on investment for your sponsors.
To meet the media relations needs of your program by joining Team ILP, contact Shawn at 541-510-3663 or Shawn@InsideLinePromotions.com . For more information on Inside Line Promotions, visit http://www.InsideLinePromotions.com.
*PHOTO BY RCM DESIGN*
Posted by Bill McIntyre at Thursday, September 17, 2020